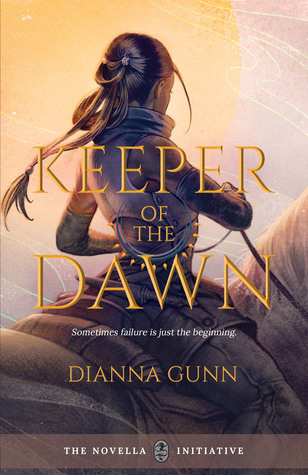 Dianna Gunn’s Keeper of the Dawn combines a smartly plotted adventure with a sweetly written romance in a richly imagined fantasy world with plenty of space for more stories if the author chooses to return to it. Unfortunately, it’s all a bit much for a novella-length work. It’s a little overstuffed, and the sequence of events, while well-considered, has a tendency to read like a run-on sentence of “and then this happened and then this happened” and so on; all characters aside from the protagonist are underdeveloped, sometimes to the point of being cardboard; and the denouement could have used good deal more space to breathe. Still, there’s a lot to like about Keeper of the Dawn, and there aren’t so many YA lesbian romances featuring asexual heroines that it’s not still important representation despite its flaws—especially when the biggest flaw is simply that the story could have used another hundred pages or so to address its shortcomings.

While the secondary characters leave quite a bit to be desired, Lai is a mostly well-crafted protagonist with a distinct character arc and notable growth over the course of the book. Her early motivations are a little obscured by the trauma and disappointment of her failure in the trial to become a priestess—it would have been nice to have a deeper understanding of why being a priestess was so important to her and what it was about her mother and grandmother that made her want so much to emulate them. The failure to achieve a lifelong dream works well as the spark to start off Lai’s journey, but there’s too much time spent in the early part of the book dealing with Lai experiencing some mild-to-moderate bullying and struggling with her own resentment over her widower father’s remarriage. It delays the start of the story, and it’s confusing and frustrating when none of this stuff is revisited later or resolved by the end of the book.

That said, once Lai gets going, things improve a great deal. Her decision to run away is impulsive, but it makes sense for her as a character, and the early aimlessness of her journey as she tries to figure out what to do with her life after such a major disappointment is relatable, if not always entirely compelling. Still, even at her lowest point, Lai never falls into the unnecessarily and unpleasantly melodramatic angst that some teen heroines are prone to, and once she discovers the possibility of a future that though different than what she had hoped for herself has the potential to be equally fulfilling, Lai is steadfastly driven to succeed. One particularly admirable trait of Lai’s is that, though she is disappointed by her early failure, she never loses a core of confidence in herself that sustains her through hard times and encourages her to find different ways to achieve her goals of worshiping her goddess and honoring the memories of her mother and grandmother.

The worldbuilding is overall strong, and the idea of sister cultures separated by hundreds of years and miles but still connected through their shared faith is an interesting one. As with many other aspects of the book, it would have been nice to see some of these ideas given more space for development, but fortunately Gunn doesn’t overdo it with details. Necessary exposition about the world is delivered in a competently sparing fashion that never overwhelms the reader with history and backstory. Much of the in-universe history is only learned as Lai learns it on the page and with a minimum of info-dumping. There are a couple of issues with unfortunate implications—primarily with the strict-seeming binary gendering of social roles—and the use of stereotypes as shorthand for cultures and characterization but nothing especially egregious.

Finally, the romance between Lai and Tara is nicely done, without relying too heavily on hackneyed YA romance tropes. At the same time, it’s a romance with a good, comfortable, lived-in quality, without any major relationship-derailing conflicts and with an uncomplicated happy ending. The depiction of Lai’s asexuality seems sensitive, and it’s nice to see a YA-targeted romance that deals so frankly with issues of consent and addresses the potential problems of mismatched sex drives in a healthy and mature way. As a love interest, Tara isn’t extremely exciting, but what she lacks in excitement (which too often means emotional or physical danger in romance) she more than makes up for by being a solid, kind and caring presence, helping Lai to settle into her new community and being a supportive partner to Lai as she undergoes her new set of trials to become a Keeper of the Dawn.

In the end, the biggest shortcoming of Keeper of the Dawn is that it ought to have been longer. There’s a novel-sized story here, especially with the decision to include so much material about Lai’s life before she runs away, and to squeeze it into a novella-sized word count, some areas have to suffer. Another hundred or two hundred pages would have made that decision easier to justify, and it would have offered plenty more space for Lai to work through her issues with her father and stepmother and to explore her feelings about her best friend achieving the goal she had for herself. It also would have allowed the ending of the story to play out less hurriedly, giving more room for Lai to have a return journey instead of just a time-jump and for her to, again, process her feelings about returning to her people and family of origin. The extra length would also have allowed Gunn to give more depth to the secondary characters and add even more worldbuilding flourishes to make her fantasy world come alive.