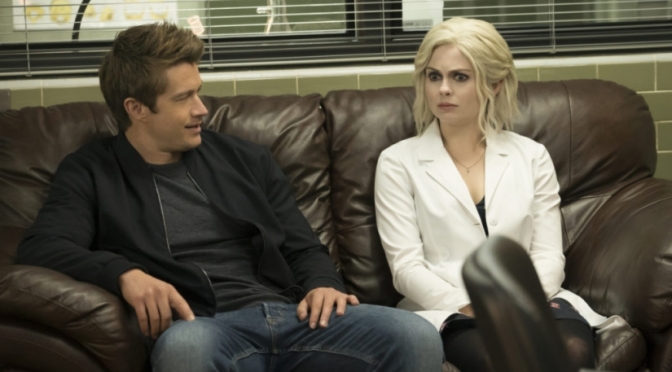 “Dirt Nap Time” contains another unremarkable case of the week as well as another tediously irritating brain for Liv to eat (though by no means as terrible as last week’s). What is lacks in case of the week panache, however, it makes up for in interesting plot developments, which are occurring at the show’s habitual near-breakneck pace this season.

The episode opens right where the last one ended, with Major having to answer for where his other dose of the cure is. Liv gets a great unlikeable moment when she refers to Natalie unkindly as Major’s “zombie hooker friend,” which she immediately apologizes for, though it’s still a bit of meanness that serves as a reminder that Liv isn’t a flawless heroine. Much of this episode is subsequently taken up with Liv trying to find out who stole the cure from the morgue, but both the prime suspects—Blaine and Don E.—convincingly deny responsibility. Interestingly, the prime suspect from the viewer’s perspective last week seemed to be Fillmore Graves, but that theory is largely weakened this week with the revelation that Justin hasn’t told anyone else about the cure yet; he was apparently waiting until he could ask Major about it.

The other thing Justin asks Major about this week is if Major minds Justin asking Liv out on a date, which is weird. On the one hand, I get it, “bro code” or whatever. On the other hand, it’s 2017. On the other other hand, it seems really early for Liv to be dating again and for Major to be so seemingly okay with it. I know that they can’t be together while Liv is still a zombie, but literally just two weeks ago they were reconnecting in a way that strongly suggests that they are (or at least ought to be) an endgame couple. I’m not a fan of overwrought relationship drama, in general, but this episode seemed to just be going to the opposite extreme with this. Maybe it shouldn’t be completely torturous for Major to see his friend going for it with Liv, and maybe Liv shouldn’t spend her whole life moping about Major, but at the same time it feels unbelievable that they wouldn’t have more feelings about what’s going on between them. That said, Liv’s date with Justin at the Scratching Post is a highlight of the episode. If it wasn’t developing so quickly, I’d have far more positive feelings about their obvious chemistry and the adorableness of their passing notes back and forth between Major.

The murder mystery this week starts off well enough, with a surprisingly promiscuous preschool teacher, but the interrogations of various persons of interest are a mixed bag and the revelation of the murderer, while somewhat unpredictable, is surprising in a way that manages to be both bad and dull. It’s weird. The worst part about it, though, is Liv’s bizarre behavior while on preschool teacher brain. It’s genuinely unsettling to see her baby talk at adult people and play with puppets in the interrogation room, and it’s for the most part extremely unfunny. iZombie is really at its best when it lets Liv’s brains-induced personality shifts show us something unexpected about the murder victims and give us a better sense of who they are as individuals. It’s that insight that makes Liv and her visions valuable for solving cases, and it’s disappointing to see the show waste two weeks in a row on over-the-top portrayals of unpleasant caricatures instead of actual characters. It diminishes interest in the murders and it makes Liv herself unlikeable while its going on.

Perhaps the most interesting storyline this week is Peyton’s work on the dominatrix murder case. She and the public defender handling the case are working together to hammer out a deal for the accused murderer, and it’s reiterated that without the guy’s confession Peyton’s case is flimsy. Indeed, when the details of the case are laid out, none of it adds up, and things take another turn for the unusual when another lawyer shows up to oust the public defender and refuse Peyton’s offer of a plea deal. When the accused hangs himself in his jail cell, Peyton goes to Ravi to ask about getting Liv to eat the guy’s brain and find out his secrets. Although the dead man has a history of mental illness that Ravi and Peyton both acknowledge that Liv won’t like, Ravi sets the brain up in his blue memory serum anyway. It’ll need to soak for ten days, so it’s uncertain if we’ll get to see new developments on this front next week or if it’ll have to wait until the episode after that.

One thought on “iZombie: “Dirt Nap Time” digs deeper into a bunch of this season’s plots”