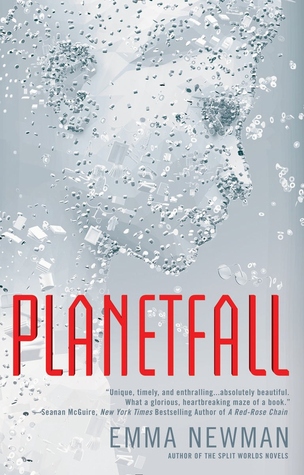 Planetfall is a brilliant portrait of a character and a community both in crises and a meditation on the ways in which the community and the individual are intertwined. It’s a gorgeously realized sci-fi mystery about a secret that festers in the heart of a seeming utopia and threatens to destroy it all.

Renata Ghali followed her dearest friend, Lee Suh-Mi, across the stars to a new planet in search of God, but what they found when they arrived on their new planet was, well, inconclusive. When Suh-Mi disappears, Renata and the rest of their colony have to figure out how to go on without her. Over twenty years later, Suh-Mi’s grandson shows up and starts uncovering the truth that Renata has helped to hide all this time.

Much of the praise I’ve seen for Planetfall has been for its narrator, and I can’t help but concur. Ren is a fascinating character with an unconventional point of view that makes hers a unique perspective to read a story from. She’s an older woman (a youthful seventy or so, in fact), a woman of color, queer, and significantly mentally ill, though the revelation of that last fact sort of creeps up on you as you read her story. The first person present tense narrative provides a nice sense of immediacy and immersion, which becomes increasingly important as the story moves along and Renata’s mental state deteriorates. Over the course of the novel, Ren becomes increasingly anxious and paranoid, then frantic as secrets start to be uncovered. It’s not always an easy thing to read, but it is absolutely riveting.

I only wish that there had been more actual science in Planetfall, although I think that’s more a sign that I’ve been in a mood for harder sci-fi recently than it is a sign that Emma Newman fails the reader in any particular way. Indeed, there are all kinds of interesting ideas on display here, from printing technology to sustainable living and social engineering. This book straddles the worlds of harder sci-fi and more human-focused sci-fi and does both justice, but I would have loved more explanation of how things worked, especially the space travel portion of the colony’s journey, which I felt was very glossed over. Realistically, it doesn’t matter and isn’t really pertinent to the story being told, which is likely why there’s not more detail about the ship and the journey, but I kind of love that stuff.

Finally, I would also have liked to see some of the themes surrounding religion and spirituality in an age of scientific and technological wonders be a little more fully developed. There are all kinds of ideas touched upon regarding the existence of God, the possible ultimate fruitlessness of humanity’s search for God, and even the ways in which faith makes people vulnerable—both to their own bad ideas and to exploitation in service of other people’s bad ideas. Ren is a great protagonist for asking questions and making observations about these things, as she’s a skeptic herself and her disconnectedness from her community makes her often a shrewd observer of people. However, her observations are thoroughly colored by her significant mental illness, making them increasingly unreliable over the course of the book even as more of Ren’s and the colony’s history is revealed, and the rather abrupt ending of the story is somewhat unsatisfying.

All in all, though, Planetfall is a great book. It’s got a lovely, almost meditative pace to it, and it’s an incredible character study of its narrator. As someone who also suffers from depression and anxiety, with a tendency towards reclusiveness, I found Ren incredibly relatable, and I can definitely see this being a book that I will return to in the future.