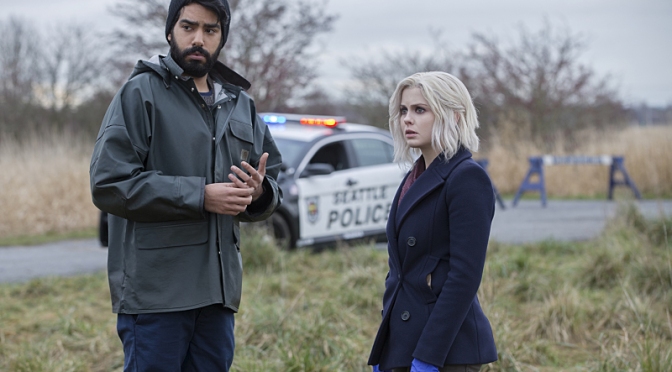 Since returning from the winter break, iZombie has managed to really hit its stride. It’s always been a good show, but the last few weeks it seems to have settled into a comfortably consistent excellence that makes it a joy to watch, but not a whole lot of fun to write about since all I want to do is incoherently and excitedly flail about how much I’m loving the show right now. I haven’t liked iZombie this much since the second half of season one, and it seems to only be getting better.

There’s no Peyton this week, which is a bummer, but there’s really no space for her in this slightly convoluted episode and I’d rather do without her than have her shoehorned in when so much else is going on. Likewise absent are Vaughn and Gilda/Rita, but with so much Blaine and Boss drama happening I didn’t miss Max Rager drama.

Of course, it helps that all of the show’s villains are getting increasingly and more entertainingly intertwined every week. In “The Whopper,” Liv is investigating a murder that has occurred almost at the intersection of all the show’s various villainous schemes. Meanwhile, Blaine’s henchmen have captured Major, who let’s Blaine in on what the “Chaos Killer” is up to, though he doesn’t tell Blaine that he’s working for Vaughn Du Clark. While that’s going on, Stacey Boss is busy promoting Liv’s new boyfriend, Drake, from henchman to hitman.

It’s a solid episode, with a lot of laughs in spite of dealing with some fairly serious material and including a lot of setup for what is being built up to be a major three- or four-way conflict by the end of the season. All the show’s significant players—Liv and company, Blaine, Stacey Boss, Vaughn Du Clark, and the FBI—are getting steadily closer to figuring out how they’re all connected, and it’s obvious that shit is going to get real very soon. The only question is who is going to put all the pieces together first.