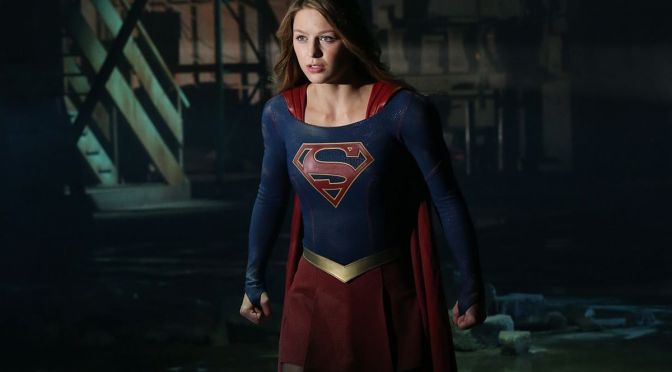 “Stronger Together” is a strong second episode for Supergirl after a slightly overstuffed (though very informative) pilot. However, it feels as if there are a couple of different shows being mashed together here, and I’m not sure that it’s entirely working.

There’s the show about Kara Zor El, plucky young super hero growing into her powers and figuring out her place in the world with the help of her friends. Then there’s the show with secret government agencies, a prison full (or, I guess, not full any longer) of evil aliens, and Kara’s presumed-dead-but-really-evil aunt, General Astra. These two shows so far seem to have very little to do with each other, their tones so disparate, and they are even so visually different that transitions between them feel jarring.

On the one hand, it’s nice to see a super hero property avoiding some of the darkness that has become so increasingly characteristic of the genre, but Supergirl seems less intent on eschewing it altogether and more committed to just keeping the dark parts of the show almost completely divorced from the brighter parts. And so, half of this episode was Kara adorkably fumbling her way through her first days as a superhero, and the other half was her finding out that her mom’s evil twin wants to murder her.

Melissa Benoist continues to bring a sort of irrepressible awkward charm to Kara Zor-El while also showing to advantage in her action scenes. One thing I noticed this week that I really like about the way this Supergirl is being portrayed is that whether it’s Benoist’s natural physique or some strategic padding, Supergirl has got some seriously visible upper body strength. While the character isn’t devoid of sex appeal, it seems as if the show is dedicated to presenting her as tough, practical, and sensible first.

The show also isn’t jumping too quickly into the implied-to-be-impending love triangle between Kara and James and Winn. I was especially concerned about Winn after his moment of indignation in the pilot of Kara’s lack of interest in dating him, but he seems to be settling comfortably into being a true and loyal friend to her. This week, while Winn did seem slightly competitive with James, I didn’t get any of the Nice Guy™ vibes that I detected in the first episode. James, on the other hand, got to have a somewhat romantic moment with Kara this week, but it wasn’t overdone and didn’t feel like a rush on the part of the writers to push Kara into a romantic relationship. Incidentally, this was one of the episode’s best scenes, title drop and all.

My personal favorite scenes this week, though, were all scenes between women.

Alex and Kara’s fight was important, and I’m very glad that the seemingly too-quick resolution of their conflict in the pilot wasn’t the end of any complexity in their relationship. So far, the show seems to be avoiding a lot of the standard troubled sibling relationship tropes in favor of showing a complicated but generally happy friendship between Kara and Alex. Certainly they have disagreements, but they seem to also care really deeply for each other in a way that colors all their interactions.

The next standout scene was Kara’s fight with General Astra. I think they could have played up the trauma Kara likely experienced upon meeting her mom’s evil twin, but it was a pretty badass fight. The show’s visual effects come off a little hokey at points, but I actually enjoy that as I feel it makes for a more authentic comic book feel. I don’t think anyone is watching this for realism.

Finally, I adored the final scene of the episode. With so few female-led superhero projects in production, Kara picking up Cat Grant’s car is a nice subversion of regular super hero tropes. Also, it just looks cool. Hovering in the air, Kara looks positively angelic, and this might be the most sort of iconic moment of of the series so far.

Speaking of Cat Grant, though, brings me to my one major criticism of this episode: It seems a little hypocritical of an ostensibly feminist show to be CGI-ing the shit out of Calista Flockhart’s face. At first I thought there was just a general soft focus in the scenes at CatCo, which tend to be very pastel-colored, but the more I saw it, the more I realized that it’s just on Cat Grant’s face. I totally see Cat as a character who is vain and image-obsessed, but that would mean lots of make-up or maybe some too-young designer outfits. This is actually someone going in during post-production and removing all the lines in her face so she looks like a creepy android or something. Needless to say, I hate this so much.

Overall, though, I’m still enjoying the show a lot, and I can’t wait to find out how the interview went.

One thought on “Supergirl: “Stronger Together” is a solid followup to last week’s overstuffed pilot”