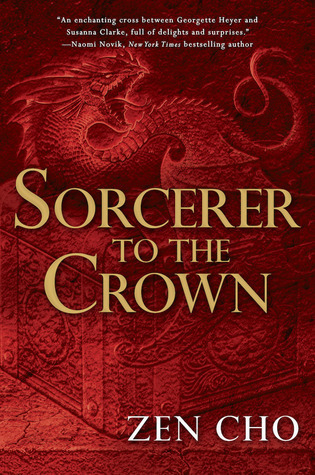 [This review is based on an advance copy of the book obtained through NetGalley.]

The book opens with a very young black boy named Zacharias being shown off to a bunch of white men to prove his (and his race’s) magical capabilities. While the ominous tone of the prologue is somewhat at odds with much of what follows in the novel, I think it’s a pretty excellent way of infusing the rest of the book–which would not be inaccurately described as a “romp”–with an undercurrent of darkness that keeps things grounded and provides a sort of baseline for the exploration of POC experiences in the rest of the story. It’s a prologue that shows the reader immediately what kind of book this is, which is the perfect sort of prologue if an author really must include one.

The rest of the story takes place after Zacharias has managed to find himself in the position of being the most eminent sorcerer in England. We quickly learn that his high office has earned Zacharias no shortage of enemies and is more a nuisance than anything else. He’s not even certain he wants the office at all, but there’s no way for him to give it up. Instead, he determines to make the best of it and try and enact what change and bring what progress he can while he still has time. To that end, Zacharias has to deal with magical school girls, Malaysian vampires. scheming racists, and angry dragons.

The characters in Sorcerer to the Crown can all be a little one-dimensional at times, and I didn’t always find Zacharias to be particularly likable, although I absolutely loved Prunella. Some things seemed a little too tidy at the end, and I’m not sure I entirely buy the romance, which was so restrained as to be almost nonexistent. Although it is kind of refreshing that the book isn’t overly focused on the romance, I would have preferred a more gradual growth of affection over time. As it was, the resolution of the romance felt somewhat tacked on and less earned than it could have been.

Still, Sorcerer to the Crown is a thoroughly enjoyable read. From beginning to end, it hits all the right notes that I look for in a book. It’s a very different perspective than we’re usually offered in Regency-set fantasies. It’s fast-paced and interesting enough that even though a great deal happens it never feels overstuffed or overlong. It’s whimsical without being precious and clever without being pretentious. Best of all, it’s a downright funny book, and I found myself chuckling aloud more than once. Definitely in my top ten books of the year so far.