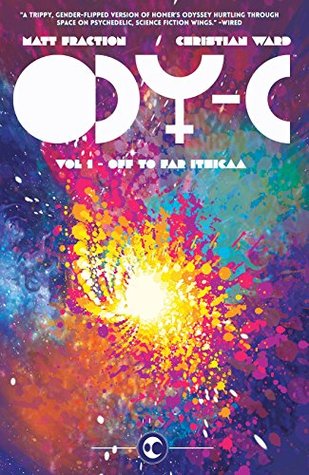 ODY-C is an ambitious, psychedelic epic fantasy that needs to be completely finished and printed into one enormous, beautiful book so I can just read it all in one sitting. It’s a futuristic, gender-bent retelling of The Odyssey, and it’s a great way of bringing an ancient story to life for a new generation of readers.

That said, ODY-C is not going to be for everyone. It definitely relies on the reader having some level of familiarity with the source material, for one thing. If you’ve never heard of Homer or The Odyssey, and don’t know at least some of the highlights of the story, you may feel somewhat at sea through much of this first volume. There’s no hand-holding here, and it’s very obvious that the reader is expected to either keep up or go spend some time on Wikipedia and then come back.

Even the language is a nod to the story’s origin. It’s written partly in a kind of sound-alike version of the dactylic hexameter that characterized much of the classical Greek epic poetry. I love this choice because it maintains some of the identity of the source material in the face of a lot of other more avant garde adaptational decisions, but it can sound clunky to modern readers. While I’m not an expert on the form to be either outraged or dismayed about the execution, I found the poetic language interesting, and it really helped to set the tone of the comic and give a fascinating classical flavor to the setting that makes it a little unique. Certainly, I’ve never seen anything quite like it.

Christian Ward’s art, of course, is stunning. It’s just page after page of gorgeous colors and textures, from brilliantly-rendered action scenes to grand space vistas. At the same time—and this is, I think, my favorite thing about ODY-C—while the overall look of the art shows a keen attention to detail (the yonic shapes of spacecraft are a nice touch in a universe that has been scrubbed almost entirely clean of men) and an eye for beauty, there seems to be remarkably little focus on making the book’s many, many women pretty. The women of ODY-C come in all shapes and sizes and colors, from the great warrior Odyssia to various goddesses and even a hideously rendered (in the best way) cyclops.

As with all comic books, my biggest complaint about ODY-C is that it’s not long enough, and I have to wait for more, which is even more frustrating since it seems to have a somewhat laissez-faire production schedule. I want more, and much sooner than I’m likely to get it.

I didn’t read as much this summer as I’d hoped to, but I think I’m finally coming out of my reading slump. With my daughter back in school, my days are my own again, and I’ve already been able to start reading and writing more. I’m not 100% certain about what I’ll be doing this fall, as I am beginning to look for a new day job after a couple of years of staying home, but right now my fall reading plan is pretty ambitious, mostly because there’s just an amazing amount of great stuff coming out over the next few months.

Currently, I’m finishing up Cixin Liu’s The Dark Forest, which was on my summer reading list. I should be done with it in a day or so, and then I’ll be moving along to Margaret Atwood’s The Heart Goes Last so I can be sure to have it finished and post my review prior to its September 29 release date.

After that, I’ve got an ARC of An Apprentice to Elves by Elizabeth Bear and Sarah Monette that archives on NetGalley on October 13th, so that’s kind of a priority. I didn’t realize that one was the third book in a trilogy (I was drawn in by the gorgeous cover, mostly), so I’ll probably have to read the first two books as well. Unfortunately, I’ve recently read some negative reviews of the first two books that make me think this series might not be my cup of tea. If I do read these, it will be before the end of September, but I might not.

Probably my biggest plan and the thing I’m most looking forward to this fall is to read all of Tor.com’s new novellas that are being published one every week or so between now and November. The one I can’t wait for is Binti by Nnedi Okorafor, but I’m excited about all of them. There are ten in total, with publishing dates from September 1 to November 17. The big question, for me, is do I want to collect all the paperbacks or do I want to just buy the ebooks, which are much cheaper, and only get paper copies of my favorites?

In any case, the tentative plan (in the hopes that I really am out of my slump) is that I want to read one novella plus one or two novel-length works (or sometimes graphic novels/comics) each week between now and Thanksgiving. On the list so far:

A few leftovers from my summer reading list that aren’t necessarily priorities but that I do intend to read soonish:

I am also super stoked about the Nightmare Magazine Queers Destroy Horror special issue in October. Queers Destroy Science Fiction was really excellent, and I loved all of last year’s Women Destroy issues, so I expect this one to be up to the same high standard. And just in time for Halloween!

My fall list isn’t quite as diverse in terms of authors as my summer one was, but it’s a good mix of different types of books. I’m really looking forward to having some comics in the mix as well. It’s going to be a good season, I think.