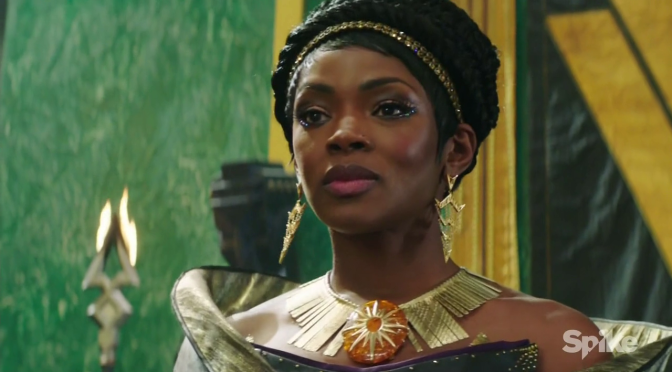 One of the things I loved about season one of The Shannara Chronicles was how unabashedly YA the show was, and, while I enjoyed the season two premiere, I nevertheless had some mixed feelings about what seemed to be a turn towards more adult-targeted action fantasy. The second episode of the season, “Wraith,” takes a step back from action in favor of focusing on soap opera and political intrigue, and it’s deliciously fun. It does feel decidedly less YA than last season, with several older characters being introduced and last year’s crop of teens played by twenty-somethings feeling much more their actual age. It’s another aspect of the shift in tone with the show’s move from MTV to Spike, but it still works. “Wraith” is a solidly enjoyable hour that smartly uses short scenes and quick cuts to keep things moving along briskly in a dialogue-heavy episode.

The episode opens with Wil and Mareth running from the wraiths that found them last week. Or, rather, Wil is running to Shady Vale to find his uncle Flick and Mareth is sticking with him because she insists that Wil is her best chance of finding Allanon. When the two of them duck into a very pretty cave to escape the wraiths, we learn that Mareth is Pyria’s daughter and was estranged from her mother before Pyria’s death back in season one. As they continue towards Shady Vale, Wil and Mareth argue over magic, with Wil insisting that he’s just an ordinary guy who wants to live an ordinary life and Mareth opining that having magic is a gift and a responsibility—while also pointing out that no matter what Wil says, he’s still been using his magic and that if he really didn’t want it he would have gotten rid of the elfstones long since. It’s a pretty classic fantasy theme, but it’s perennially interesting to see characters work through the whole magic-as-burden-and-curse vs. magic-as-gift-and-responsibility debate; I only hope the show doesn’t get distracted and forget they brought it up.

When Wil and Mareth arrive at Shady Vale, they find Wil’s childhood home in shambles, but Flick Ohmsford is still alive. Wil patches his uncle up a bit, and Flick gives some more history of Wil’s father Shea Ohmsford, Allanon, and the last war against the warlock lord. It turns out that Shea wasn’t driven mad by overusing the elfstone, but from refusing to embrace his power. It seems that this might be the encouragement and validation Wil needed to embrace his identity as a Shannara, although it’s at odds with everything Flick raised Wil to believe all these years. Still, I’m inclined to forgive this inconsistency in the interest of moving along from this boring ass plot. I’m very interested in Mareth and her hunt for her deadbeat druid dad, but Wil—adorable as he is—has always been the weakest character of the show, and his family drama in deeply boring.

Last time we saw this pair, they’d been captured by Rovers, and I was looking forward to seeing them escape this week. Instead, they are “rescued” almost immediately by a bounty hunter named Garet Jax, who hints at Lyria’s secret identity before knocking Eretria out and leaving with Lyria. In a surprising (due to timing only) twist, Lyria turns out to be the princess of the human kingdom of Leah; Garet Jax was sent by her mother, Queen Tamsin, to retrieve her. Tamsin is currently receiving the still-struggling King Ander, and she wants the elven king to marry Lyria and unite their kingdoms after years of disagreement between them. Ander has some reservations and doesn’t want to be trapped in a loveless marriage. We find out that he and Catania are now in a relationship, though she believes it’s his duty as king to do what’s best for his people, even if that does mean a political marriage. Eretria shows up and is justifiably upset with Lyria, which is exacerbated by Tamsin’s manipulation. Eretria’s about to leave with Allanon to go find Wil when General Riga shows up and kidnaps the druid. She decides to go after them, sending Catania to tell King Ander about what’s happened, but Catania is intercepted by one of Ander’s guards, who kills her (or at least stabs her), outing himself to the audience as a Crimson collaborator.

Fortunately, all this mess of events is delivered in short, snappy scenes that stay laser-focused on their point. If anything, we could have used a handful of interstitial scenes to explain some of what’s going on. I would have liked to see a little of Eretria tracking Garet Jax and Lyria, for example, and it would have been nice to have a little more of a sense of the relationship between Ander and Catania before now. I mean, how did that happen? Still, there’s something rather refreshing about the lack of hand-holding here and there’s a pleasing kind of honesty about the show being willing to just go balls to the wall with this mix of family drama and political intrigue. And it helps that the intrigue is so delightful. Ander isn’t always the most likeable fellow, and we’re still getting a sense of who he is as a king, so it’s not obvious yet whether Tamsin is justified or not in her vendetta against the elves. Her self-interested calculation may be perfectly sensible. Similarly, Tamsin’s assessment of her daughter and Tamsin’s frank statements to Eretria are at least somewhat accurate. Lyria is at best an unreliable narrator, and it will be interesting to see what she does next. It’s a little disappointing to see what seemed last week to be a sweet and healthy same-sex relationship broken up this early in the season, but there’s always the hope of a happy reunion later on.

What works both best and worst about the stuff going on in Leah is probably Leah itself. The wide shots of Tamsin’s castle are almost cartoonish, and there’s a very poorly composited green screen shot right as Ander and Allanon arrive, but the interior sets are decent enough. I suspect these might be reused sets from Arborlon in season one, but changes in set dressing, lighting and costuming help to make Leah feel real and lived in. The bordello scene is surprisingly not disgusting towards women and could even have been a bit more risqué without being amiss. Overall, there’s something of an Emerald City-inspired feel to it all that I liked, for wall that it is derivative. I liked the variety of costumes—even Lyria’s bizarre open-crotched dress. What I appreciated most of all, however, was the diversity. While the first season of the show had a tendency to cast actors of color in significant supporting roles against a backdrop of whiteness (a common criticism of shows attempting to bring diversity to the screen), Leah is full of diverse crowd shots that make it clear that this is a criticism that someone in charge, somewhere, heard and took to heart and has worked to improve upon in this little corner of television.

Bandon is still hunting for Wil when he comes upon some of Riga’s Crimson torturing a healer from Storlock. Bandon kills the Crimson soldiers and takes over torturing the gnome, reading his mind to find out where Wil went. He leaves the gnome alive, even heals him, before leaving to go find Wil, who is still in Shady Vale with Flick and Mareth. When Bandon finally catches up to Wil, we find out that he doesn’t want to kill Wil; he wants Wil as an ally, even trying to manipulate Wil into compliance by reading Wil’s mind and bringing up Wil’s own grievance against Allanon, who Bandon insists is the real enemy. What Bandon really wants, however, is the skull of the Warlock Lord, and he’s been told that “the Shannara” knows where it is. It’s not Wil who knows, though; it’s Flick, who was there when Allanon and Shea Ohmsford defeated the Warlock Lord and hid his parts. When Wil refuses to join Bandon, Bandon takes Flick and gives Wil three days to find Allanon and bring Allanon to Bandon.

It’s a difficult task that Bandon sets for Wil, kind of unreasonably so, but this is a fantasy show. I figure next week will be another action-adventure episode, with Wil rushing to find and rescue Allanon so they can go and rescue Flick. What is most surprising in all of this, to be honest, is the fast pace at which events are unfolding. Last season had a couple of very strange side-quest episodes, including the ridiculous “Utopia,” and I’m hoping we don’t get anything like that this time around. At the same time, oh-god-please-nothing-as-godawful-as-“Utopia” is a pretty low bar to clear. I’d much rather see the show sort out its pacing problems and be positively good instead of just not terrible.