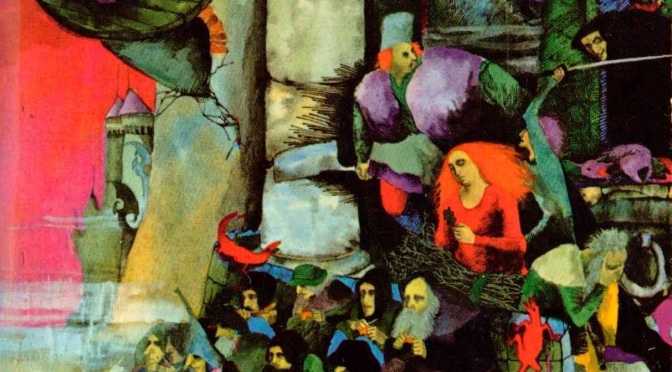 These chapters begin with yet another flashback in the story, this time to focus on Fuchsia Groan’s reaction to her brother’s birth before setting her on a trajectory that has her meet Steerpike, who talks her into introducing him to Doctor Prunesquallor, who eventually takes Steerpike into his service. To the degree that Titus Groan has any plot at all, this constitutes a significant development, and these chapters seem to mark the end of the introductory saga of Titus Groan’s birth and christening, the immediate reactions to those events, and Steerpike’s rebirth as something other than a kitchen boy. The overall impression of the first two hundred pages of Titus Groan is of a season of change within Gormenghast, but within these few chapters, the story is focused on the contrasts between Fuchsia, the scion of a strange and ancient nobility, and Steerpike, the ambitious interloper who might as well have sprung fully formed from the bowels of Gormenghast itself for all we know of his history.

Chapter 22, “The Body by the Window,” finds Fuchsia absolutely distraught over her brother’s birth, and this offers us some insight into her psychology. Fuchsia is passionate in her hatred, which extends to everything: “I hate things! I hate all things! I hate and hate every single tiniest thing. I hate the world!” In her next breath, Fuchsia expresses a desire to live alone: “Always alone. In a house or in a tree.” And she fantasizes about a man who will come and rescue her from her exile. She sees herself as separate and different from the rest of those around her, and she hopes for “someone from another kind of world—a new world” who will fall in love with her because she lives alone, because of her differentness and, she says, because of her pride. Further requirements for this imaginary lover include great height—“taller than Mr. Flay”—strength and yellow hair “like a lion” and big feet—to make Fuchsia’s own big feet seem smaller. Fuchsia’s fantasy man is also clever, and he must wear dark clothes to enhance the brightness of her own.

On the one hand, Fuchsia’s outburst and her fantasies may be typical of a spoiled and sheltered fifteen-year-old. On the other hand, they are the beginning of a great deal of work in these chapters to show us who Fuchsia is and explain her place in Gormenghast and its narrative. Fuchsia’s place in the story of Gormenghast—both in her understanding and the reader’s—is deeply tied to her sense of self, which is in turn deeply tied to her connection to the place of Gormenghast. For all that Fuchsia verbally expresses feelings of alienation and a desire to be left alone, she doesn’t fantasize about leaving Gormenghast. Indeed, just a page after she dreams of a lover who will come fall in love with her where she lives alone, she writes herself onto the very walls of the castle: “I am Fuchsia. I must always be.” We’ve already had an inkling of Fuchsia’s feelings about her hidden attic rooms, and in Chapter 23, “Ullage of Sunflower,” there is even more evidence of the way that Fuchsia’s identity and sense of self are intimately connected with the places she considers her own. Her feelings of violation when she finds Steerpike in her rooms are palpable and vividly conveyed; Fuchsia has a visceral reaction to Steerpike and his transgression on her space, which is only a couple uses of the word “penetrate” away from being an obvious rape metaphor.

Instead, the interactions between Fuchsia and Steerpike in Chapters 23 and 24 (“Soap for Greasepaint”) could perhaps generously be interpreted as a seduction of sorts, as the cold, calculating Steerpike tries to charm Fuchsia into helping him rise above his present station. At the same time, there’s something decidedly unsexual—certainly unsexy—about all of this. While Fuchsia is a girl who has entertained romantic ideals, there’s no evidence that Steerpike ever has, and it’s quickly revealed that Steerpike’s grasp on the workings of Fuchsia’s mind is shaky at best. They are set up as opposites—Fuchsia’s imagination and passion versus Steerpike’s base cunning—but not in the way of opposites that attract. Fuchsia in fact finds Steerpike repellant; though she’s charmed by his clowning, she never trusts him and has an almost instinctual suspicion of the boy, who she pegged immediately as cleverer than herself. Steerpike’s instincts serve him well enough, however, as he does manage to achieve his objective of an introduction to someone who might give him different employment. In a different novel, I might suggest that Steerpike’s failure to fully understand Fuchsia—and his subsequent failure to even suspect that he might have failed—might be the seeds of his undoing. In this novel, peculiarly non-linear and plotless as it is, it’s hard to say.

What seems most important about these chapters is the illustration of contrasts between Steerpike and Fuchsia and the way these contrasts serve as an illustration of the class and station dynamics within Gormenghast. In the absence of a strong plot, it’s easier and more rewarding to interpret Titus Groan as a book about Gormenghast the place rather than as a story about Gormenghast’s people. Rather, the characters are all simply ancillaries to the setting, which actually has very few characters when you think about it. The Groans and their servants inhabit vast empty spaces within the walls of Gormenghast, even going years without seeing each other at times. The Mud Dwellings outside the castle are inhabited by unnamed crowds, and Swelter’s kitchen, while a veritable hive of activity, is a hellish place and once again mostly filled with nameless masses.

It’s an emptiness that is both literal—there just aren’t very many people in Gormenghast—and metaphorical—the lives of the family of Groan and their closest retainers are variously empty of employment or meaning, filled with nonsense and absurdity and hollow traditions. It’s this world that alienates Fuchsia, who escapes into a fantasy world in which she imagines being rescued through marriage, perhaps the only ambition a sheltered and neglected girl of her station can imagine or, perhaps, the only ambition the author could imagine for her. It’s also this world that the outsider, Steerpike, wants to infiltrate, but one can’t help but feel that he is going to be sorely disappointed by what he finds. In the end of this section, it’s this empty, lonely world of Gormenghast that leads the Doctor and Irma Prunesquallor to employ Steerpike at all; they’re educated, relatively lively people who are hungry for intelligent and stimulating society of a kind that doesn’t exist within Gormenghast, and they hope that Steerpike will fill that void in their lives.