That’s not to say that it’s a flawless film. Some of the humor misses its mark; Chris Hemsworth’s inept receptionist, Kevin, is very one-note; the villain (Neil Casey) is underdeveloped; and there are at least a couple of scenes that seem to have been included literally just because Kate McKinnon is hilarious. I mean, yeah, Kate McKinnon is a riot, but one oughtn’t to let her hijinks take over to the point where they cause pacing problems—and they do, a little. Still, Ghostbusters is exactly what it ought to be: a delightfully funny low-middle brow summer movie whose flaws are far outweighed by its positive aspects, which are practically legion.

By far my favorite thing about Ghostbusters is how it showcases the friendships between its four main characters. It’s refreshingly naturalistic the way these women come into each other’s lives, and it’s great to see a healthy, functional female friend group take center stage in a major summer movie. Kristen Wiig, Melissa McCarthy, Kate McKinnon and Leslie Jones have an easy chemistry together that really sells the evolution of the group as friends and colleagues and makes their interactions a pleasure to watch. Each woman has a distinct role to play, and all of them contribute significantly to the group. Best of all their group dynamic is totally free of anything resembling cattiness or jealousy. Sure, Abby (McCarthy) and Erin (Wiig) have a history that has to be resolved, but Erin and Jillian (McKinnon) are never competitive for Abby’s attention and when new friend Patty (Jones) joins the team she’s accepted quickly and immediately settles into the group as if she’s always been there.

Speaking of Patty, I was very concerned when the first trailer came out that she was going to be a sassy, street smart stereotype. Leslie Jones herself took to Twitter at the time to assure fans that this wasn’t the case, and she was right. Patty Tolan isn’t street smart; she’s book smart, a local historian whose vast knowledge of New York and excellent deductive skills are key to saving the city. That said, criticisms that a black woman is the only non-scientist in the group are reasonable, and while the racial makeup of the cast mirrors that of the original Ghostbusters I’d like to think we can do better than that over thirty years later. If anything, New York City has only gotten more diverse in that time, and with all the ongoing conversations about representation in media—Ghostbusters has itself been at the center of that because of the choice to reboot the franchise with an all-female cast—there are fewer excuses than ever to have a cast as white as this one. Do better, casting directors.

The actual story in Ghostbusters is pretty thin, which is firmly in the tradition of the franchise, but villain Rowan is an interesting choice. For most women and anyone tuned into feminist discourse, Rowan’s misogyny, pathological aggrievement, delusions of grandeur, and his simmering, rage-fueled sense of entitlement will all feel familiar. We have almost all met this man, and if we have we’ve definitely fantasized about how to vanquish him. Ghostbusters taps into that fantasy and provides a pleasant catharsis at the end, in spite of its very silly plot.

Fortunately, what the movie lacks in the storytelling department it more than makes up for in the sheer unadulterated fun department. All four leads fulfill their roles with joy and gusto. Kate McKinnon in particular brings a manic energy to the screen that is downright infectious. Cameos by most of the original cast are for the most part well-integrated, and there are some nicely done visual jokes and references to both the first and second Ghostbusters, though younger children and those unfamiliar with the older films may not catch all of them. While a couple of running gags in the film outstay their welcome, I (and everyone else in the theatre except for maybe one fedora-wearing dude) laughed constantly throughout the nearly two-hour runtime.

Ghostbusters isn’t a cinematic masterpiece by any means—though the special effects are top notch and masterfully walk the line between cartoonish and creepy; be sure to see it in 3D—but it’s a truly excellent summer movie that more than does justice to the original movie and smartly updates the material to entrance a new generation of children with its message that the power of friendship can conquer cynicism and hate. Also, ghosts.

Charles Dance is an absolute treasure.

I wish they had made better use of the delightful Matt Walsh.

Gertrude the ghost is beautiful.

DO stay through the entire credits. 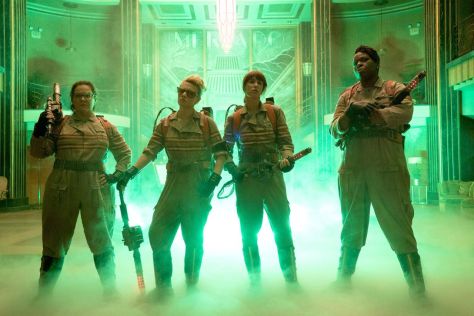 One thought on “Movie Review: Ghostbusters (2016)”