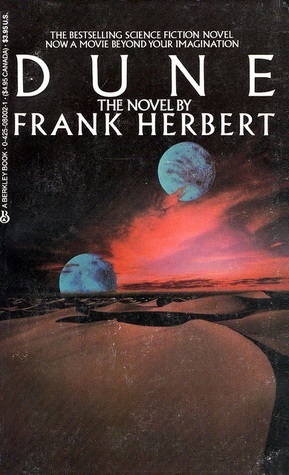 Last week I polled the SF Bluestocking readership to see what my Let’s Read! Project would be for the month of May, and Frank Herbert’s Dune is the book that came out on top, and pretty handily.

Dune is a novel that has been on my to-read list for literally years, but it’s also a book that I know very little about outside of the expected nerd culture references that it’s impossible to be into SFF and not have come across. I know it’s a book that has been heavily influential for both sci-fi and fantasy; I know that it takes place on a desert planet; I know that David Lynch did the movie back in 1984 (though I’ve never seen it in spite of having seen most of Lynch’s other work); and I know that it has sand worms in it, but only because I looked it up when it was referenced in that Fatboy Slim song that came out when I was in high school. I haven’t read any reviews of the book or movie, and having not read the book, I also haven’t done more than skim any of the many pieces about the book and its legacy that were published in the year of its 50th anniversary.

All in all, I’d say I’m coming into this about as entirely unspoiled as one can for a highly popular and widely read and referenced book that’s over half a century old. Which is kind of cool. I’m usually not even this unspoiled when I read new releases, just because of the sheer amount of advance reviews and promotion that is the standard these days.

If you are reading along with me:

I’m pretty excited about this book. I’ve been sort of systematically (albeit slowly) working through some SFF classics over the last couple of years, and this one is obviously pretty essential reading, if only for academic reasons. In any case, I’m finally going to find out what I’ve been missing out on all these years.

One thought on “Let’s Read! Dune by Frank Herbert”