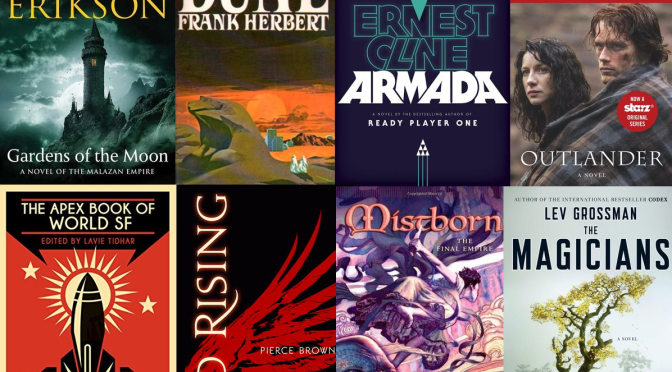 Last year I blogged my reread of Jonathan Strange & Mr. Norrell ahead of the US airing of the BBC miniseries based on the book, but a broken foot and a resurgence of major depression sort of derailed a lot of other plans I had then. This year, I’ve already blogged my way through the 1.1 million words of short fiction in Up and Coming: Stories from the 2016 Campbell-Eligible Writers, which was a sort of last minute idea I had just three weeks before Hugo nominations were due. I will be doing some Hugo blogging once the finalists are announced next week–surely there will be a few things I haven’t read–but I’m also going to be making Let’s Read! into a regular feature at SF Bluestocking.

Probably it will be three posts a week, though it could be more depending on how much time I’m ultimately able to dedicate to the project. My plan right now is that, at least until about July, I’ll be recapping Game of Thrones every Monday, publishing regular book reviews twice a week, Weekend Links on Saturdays, and then three Let’s Read! posts mixed in there somehow. First, though, I need to figure out what to read next. Because I’m indecisive and can write about pretty much anything (I’m very opinionated, obv), I feel like the only thing to do is to leave it up to my few readers.

So. Here are the options, with short pros and cons:

So. Lots of options, and they’re all things I’d like to get around to eventually. What do you think?

One thought on “Let’s Read! What’s coming next? (Well, first a POLL!)”