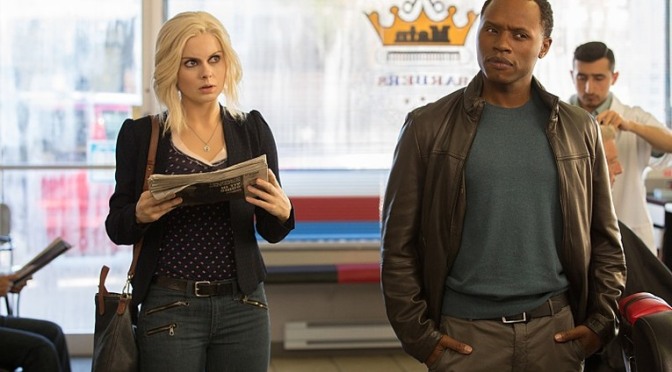 “Max Wager” was a solid episode that advanced all my favorite plots while also not making things too easy for Liv and Major, whose relationship troubles ate up perhaps a tad too much of the hour. Still, even Liv and Major doing sad vanilla Skype sex couldn’t ruin an episode that had so much good stuff going on.

It looks like Liv and Major are really happening, which I’m not super thrilled about, but it does give Ravi a reason to spend the whole episode testing over a hundred different types of condoms to find out which one might let Liv and Major have sex. The answer is none of them, because zombie virus is very tiny, and Ravi proves that he is the world’s best friend before the end of the episode when he bursts in on Liv and Major to, I guess, physically stop them from having sex if he had to. Also, Ravi’s condom-balloon unicorn is great. Also, also, I would like it if Ravi and Peyton would start making out again now, but I’ll settle for companionable roommate breakfast together.

I was happy to see Clive get a little more to do this week, and while the chance meeting between Clive and Dale and Liv and Major was a little cringeworthy at times (entirely because of Major, who apparently knows well enough to say “Native American” but not enough to avoid making vaguely racist and unfunny “jokes”), I was mostly just glad to see that the show is moving things along between Clive and Dale. It really helps to establish that Clive has a life and personality and goals when he’s not just hanging around with Liv—which was also called out in the scene. I think this was supposed to be amusingly self-aware, but it fell flat with me. I don’t want a self-aware quip about how underdeveloped Clive is or how underused he is in the show. Just fix it, please.

Once again, Peyton is back, and while I always wish we got to see more of her, she got some good material this week. While we’re first introduced to Big Bad Stacey Boss with Liv at the barbershop (which was an incredible scene, by the way), we only find out who this extremely creepy little guy is when he shows up at Peyton’s office to threaten her into stopping her investigation of his illegal activities. She isn’t going to stop, obviously, but in Stacey Boss the show has managed to create its most legitimately scary villain yet.

The best scenes of the episode were all Blaine’s, though. David Anders does an amazing job of balancing evil, humor, and pathos. Literally every time this guy is on screen, things get interesting, whether he’s talking with his dad, drunkenly philosophizing at Liv, or maudlinly murdering his own grandfather.

It’s all a perfect set up for the absolute gut punch at the end of the episode when, at first, we think Major has murdered Blaine’s dad (making Blaine’s killing of his beloved grandfather tragically unnecessary) only to find out that Major hasn’t been murdering any of the zombies that have disappeared. He’s only freezing them, presumably to be thawed and cured at a later date. Though this makes Major’s brief flirtation with self-destruction earlier in the season somewhat more inexplicable than it already was, it’s good to know that Major isn’t a total monster.

Aside from my general boredom with the Liv and Major drama, my only real criticism of this episode is that with a title like “Max Wager,” I expected to see some Vaughn. In the end, though, any disappointment I felt at the lack of Vaughn du Clark was more than mitigated by the abundance of Blaine and the introduction of a new villain to love-hate.