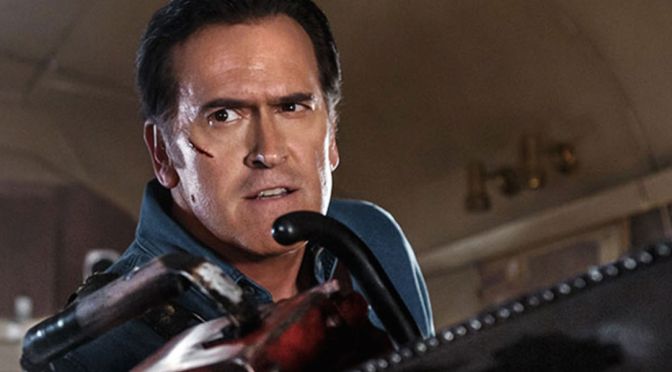 Ash vs. Evil Dead is, so far, everything I hoped it would be. My expectations weren’t high for this show, but I have to admit that my hopes were, and Starz has delivered.

My biggest fear about this television adaptation was that, in a time where grit and grimness is highly popular, it would take the material far too seriously. Fortunately, that isn’t the case so far. In fact, in “El Jefe” I think the material was treated with exactly the level of seriousness it deserves.

That said, most of this first episode was devoted to introducing characters. establishing the show’s mythology, and setting up the initial crisis. All of these things are accomplished by the end of these first forty minutes, and the episode is tightly scripted, fast-paced, and hilariously entertaining.

Ash himself is less likable that I remember, although to be fair it’s been probably ten years since I last watched Army of Darkness, which gives a much better picture of Ash’s character than Evil Dead ever did. Still, Bruce Campbell is ridiculously charming, and he makes the most incredibly goofy faces. I could have done without seeing him grossly proposition a girl young enough to be his daughter, although Kelly (Dana DeLorenzo) seems like a character who can hold her own with an old creepy. In any case, that bit of weirdness was basically entirely made up for by getting to see Ash smash a bunch of vases against his own face while fighting an evil doll—and the CG for that scene was perfectly terrible, by the way.

Ash’s sidekicks, Pablo (Ray Santiago) and the aforementioned Kelly, fit into the Evil Dead universe perfectly, and Ray Santiago could give Bruce Campbell a run for his money in the silly faces department. Pablo’s almost blind faith in Ash is endearing, and Kelly so far doesn’t fit neatly into any particular stereotypes. I also like that while Pablo may be smitten with her and Ash might leer at her, the camera treats Kelly with respect; I can’t think of any pervy shots of her, anyway, which helps to reassure me that Kelly doesn’t just exist to be ogled or end up a love interest.

The other major character that got a lot of screen time this week was state police officer Amanda Fisher (Jill Marie Jones), whose first encounter with the evil force Ash has awakened (in a scene that highlights the dangers of mixing drugs and ancient books of magic) ends with her having to shoot her partner’s head off, which earns her a suspension from the force and an internal investigation. Amanda’s introductory scenes are the only ones in this first episode that I think were at all scary, but they also felt very consistent with the tone of the old Evil Dead films, with a similar visual effects style that relies chiefly upon great gouts of fake blood. While Amanda is moping in a diner after her traumatic experience, we get to meet Lucy Lawless’s character, Ruby, the only main character who remains mysterious by the end of this episode.

Overall, this episode greatly exceeded my expectations, and I’m now legitimately excited about this show instead of just in it for the nostalgia factor. The next test for Ash vs. Evil Dead will be whether or not the show continues to hold up without Sam Raimi at the helm for every episode. Next week, someone else takes the reins, and we’ll find out. Hopefully, we’ll also get to see more of Lucy Lawless.