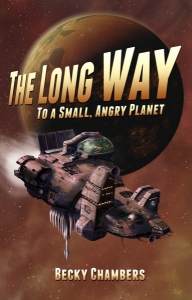 The Long Way to a Small, Angry Planet is basically like if Firefly had a baby with Star Trek and then that baby had a baby with the best and most sensible elements of social justice Tumblr. It’s not a light read, exactly, but its ideology never overpowers the story being told, either. That said, “ideology” is really too strong a word for a message that pretty much amounts to “people should be nice to each other” coupled with “families come in all shapes and sizes.”

The Long Way starts with a pretty standard space opera character–the young person going out into space for the first time–but the book turns out to be mostly not from this character’s point of view. Instead, it’s actually a series of vignettes in chronological order, over the course of a wormhole drilling ship’s year-long trip to the center of the galaxy and from the perspective of several of the Wayfarer‘s crew.

I honestly have nothing negative to say about this book, and I don’t want to ruin any of the good things about it for people who haven’t read it yet by talking extensively about it here. It’s a book about tolerance and how people learn to live with each other, and it particularly explores different concepts of family, both biological and constructed. It’s a book about the potential of humanity, but it also deals frankly with how small we are in the grand scheme of things. It’s a dream of a future where we humans manage to turn out alright in spite of ourselves and where we find some company on our cosmic journey to being better than we are.

The Long Way is a deeply beautiful and profoundly optimistic book that you owe it to yourself to read if you love science fiction. Or if you just like people. Or even if you don’t like people but want to have some hope for them for a little while. Or if you really don’t like people, but do like aliens, because Becky Chambers writes great aliens. Just, you know, go read this book as soon as possible.