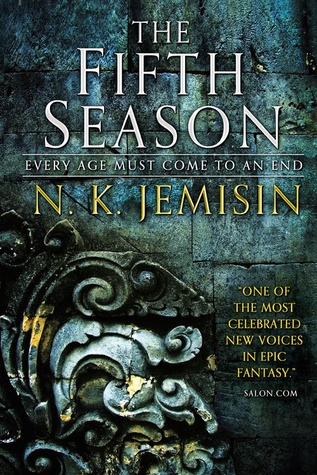 N.K. Jemisin’s The Fifth Season is probably the book I’ve been looking forward to the most this year (it’s at least tied with Catherynne Valente’s Radiance), and it’s hands-down the best book I’ve read so far in 2015. I mean, I’m still totally devastated by it like a week after finishing it, but in a good way.

Even the prologue of this book–and I mostly despise prologues–is equal parts harrowing and thrilling. It does a great job of setting the mood for the next 500 pages, and when it’s put in proper context by reading the rest of the book–and I highly recommend going back and rereading the prologue when you’re done–it’s even more impressive.

The Stillness is one of the most unique fantasy worlds created in recent years. I love the idea of the world being wracked by repeated apocalypses, and Jemisin’s imagining of the sorts of cultures and societal structures that might arise as a way of dealing with such an unpredictable environment is sensible and richly detailed. The magic, orogeny, is wonderfully creative, well-conceived, and beautifully executed throughout the novel. I especially liked the terminology used to describe orogeny and orogenes. Especially notable are the differences in the ways that different characters talk about orogeny, including the ways in which the book’s orogene characters talk and think about themselves. Even the slur, “rogga,” works well precisely because it’s so reminiscent of other, more familiar slurs.

At the same time, however, there is no symbolism or allegory here. The orogenes are not a metaphor. Rather, Jemisin uses the fantastic to create a picture of something real and true about humanity, but free of any obvious real-world parallels (although not without identifiable real-world and literary inspiration). The Stillness is not a mirror of our world or a vision of our future. Instead it’s an exquisitely original fantasy world peopled with characters that are deeply and often heartrendingly human.

The story is broken up into three narrative threads: that of Essun, a mother of a dead son and a missing daughter who is searching for her murderous husband; that of Damaya, an orogene child; and that of Syenite, a young orogene on an important mission. Damaya and Syenite’s stories are told from a fairly close third-person point of view, but it’s the second person point of view used for Essun’s sections that is the most arresting part of the novel. Essun is absolutely captivating, and the second-person point of view works to make the reader intensely involved in the story, grants a sense of immediacy to the narrative, but also creates just enough detachment so that one isn’t completely overwhelmed with all the things that Essun is dealing with.

Even still, Essun’s story just destroyed me, and I’m torn between wishing desperately for the next book in the series and thinking that it’s probably best that I’ll have a year or so to recover before then.

The Fifth Season is one of those rare fantasy novels that manages to be both an incredible triumph of world-building and amazing character-driven story. It’s a smart, inventive, fast moving book that deftly weaves together its fractured narratives to create a nearly flawless gem of storytelling. I have loved everything I’ve read by N.K. Jemisin, but this book really is a masterpiece.