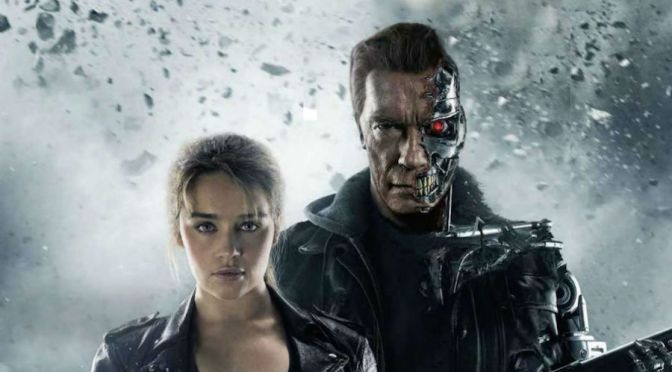 Terminator Genisys is a kind of objectively bad movie, but I genuinely enjoyed it. Probably, this is because my only expectations when I went in were that I was going to see robots and explosions, both of which Genisys delivered in spades.

The biggest problem with Terminator Genisys is the time travel. The Terminator franchise has always been about time travel, so it’s no surprise that it features prominently in Genisys, but the implementation of it just sucks. Basically everyone is time travelling, but there are several different timelines crossing each other and everything just turns into a big old mess.

It’s not terribly convoluted, really, but the mechanism by which all this stuff happens just doesn’t make sense at all. Something something time energy or some nonsense. Terminator Genisys is the sort of time travel story where the writers seem to have realized (incorrectly) that by waving their hands and shouting “alternate timeline!” they could pretty much change things up however they wanted to. It’s absurd if you spend more than about two seconds thinking about any of it, but it does manage to make Genisys more of a reboot than a sequel, and I think it’s in some ways a successful reboot. Certainly, there’s plenty of room left at the end for sequels in this timeline.

With the casting of Doctor Who‘s Matt Smith as Skynet/Genisys, all this time energy and time being rewritten stuff feels a little too on the nose. At the same time, I think any Who reference being made is going to go right over the heads of most of Genisys‘s target audience, which is presumably people who know enough about Terminator to be interested in seeing this movie. I just don’t see there being a ton of overlap between folks who want to see Terminator 5 and Whovians. And, really, if they were trying to draw the Whovian crowd to the theater, I would have thought they’ve spend more time using Matt Smith in their promotion of the movie. Perhaps the reason that didn’t happen is because Matt Smith’s character is perhaps the least sense-making thing in the movie. He plays the physical-ish embodiment of Skynet, and he seems to know basically everything, with no explanation for how he knows so much. Other than plot convenience, of course. 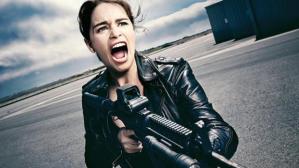 Emilia Clarke is fine as Sarah Connor. Although she seems to be slightly exasperated throughout the whole movie, it’s certainly a much less wooden performance than she usually turns in as Daenerys Targaryen on Game of Thrones. When it comes to the actual action scenes, she does a credible job of projecting a toughness that belies her tiny stature.

Jai Courtney is little more than a pretty face in the role of Kyle Reese, which is really all he needs to be. Jason Clarke as John Connor shows up. I love J.K. Simmons, so I was sad that his character wasn’t used in a smarter manner, and the same goes for Dayo Okeniyi, who is criminally underused. The real surprise for me was how well Arnold Schwartzenegger performed. Certainly he was greatly aided by CGI and body doubles,  but he was likable–even lovable. I’m not sure that terminators really ought to be lovable, but I think it worked here, and the couple of moments in the movie where I had feelings other than “cool explosion!” or “awesome robot!” were moments involving Schwartzenegger.

Terminator Genisys isn’t a good movie. It’s not a feminist movie, for all that it does include a pretty badass heroine. It manages to not be offensive in any particular way that I can think of, which is nice. However, the best thing I can say about it, if I’m honest, is that I had fun, and that is only because I purposefully kept my expectations low and chose to turn my brain off as much as possible.