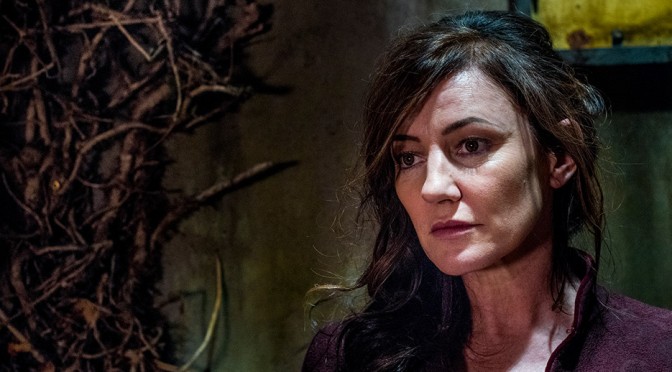 After some slower episodes mid-season, Into the Badlands was back in peak form this week with “Sting of the Scorpion’s Tale,” which continues to pull the show’s different storylines back together and brings back the martial arts action (sadly lacking in the last few weeks) in a big way. It’s nice to see how this show has developed and improved over its first season, and 1ith just two episodes left in season two, things seem to be really shaping up for a decisively epic finale after this week’s events. One of the major frustrations of the first season of Into the Badlands was its bizarre cliffhanger ending that left pretty much everything unresolved; if anything, I’m starting to suspect that season two may have too tidy an ending (though the advantage of that would be starting season three with essentially a blank slate to soft-reboot the series if they wanted to). Either way, this episode brought a nice infusion of energy and urgency to a story that had been lagging a little for a couple weeks, and that bodes well for the final two episodes of the season.

The episode opens with the Widow and her butterflies attacking Baron Hassan in a lovely (if too short for my taste) fight sequence that ends with poor Hassan losing his head. We shortly learn why when the Widow and Tilda arrive at Quinn’s bunker for an exchange of grisly trophies. While the Widow was taking care of Hassan, Quinn carried out his own assassination—of Baron Broadmore. And all Broadmore’s wives and children, which doesn’t sit well with the Widow, who still fancies herself a protector of women and children. She’s appalled, but not enough to break their alliance off just yet, and she even defends her decision to Tilda later in the episode when Tilda confronts her mother about having turned Veil right back over to Quinn. It continues to feel as if there’s a major conflict brewing between mother and daughter here, and I have a strong suspicion that it’s going to happen very soon.

Sunny, M.K. and Bajie finally make it through the wall, only to find out that Baron Chau’s clippers are involved in smuggling people into the Badlands—because of course Chau is always looking for new cogs to sell to the other barons. Sunny is able to turn this to his advantage though, and once Chau learns who he is, Sunny is able to formulate a plan that allows him to free M.K. and Bajie as well. I didn’t love Chau’s weirdly long, very clunky new update to Sunny, but their plan to draw out the Widow and defeat her is plausible enough, as is Sunny’s ultimate betrayal of Chau as soon as the Widow tells him that she can take him to Veil. What’s less plausible is that both M.K. and Bajie start off thinking that Sunny has really betrayed them, which makes no sense and is literally the opposite of everything we know about Sunny at this point.

The final major storyline of the week is one that I wasn’t expecting but that, in hindsight, should have been pretty predictable. With both Lydia and Veil back in his possession, but now without an heir and with his brain tumor continuing to progress and likely to kill him, Quinn is thinking about the future—and he’s got his eye on baby Henry to take Ryder’s place. All Quinn has to do is marry Veil to make it official, which he proposes over a dinner of raw steak in a scene that makes Lannister family dinners seem healthy and functional. Veil is ready to kill Quinn before willingly going through with this farce, but Lydia encourages her to instead go through with it, if only to protect Henry, and this is an honestly fascinating dynamic.

While Lydia was jealous and distrustful of Quinn’s other second wife, Jade, there’s none of that here. Instead, Lydia—despite her own seemingly confused feelings for Quinn—is encouraging and kind to Veil. Sure, Lydia is pragmatic about the marriage, but it’s made clear that she sees this as about survival, a temporary sacrifice that will keep Henry safe and secure Veil’s future, even if it means submitting to violation. Overall, this forced marriage is handled with a reasonable amount of sensitivity, and Veil is fortunately saved in the nick of time from being actually raped on her wedding night—and she’s saved by the news that Sunny is back, which is obviously a huge relief to her and also sends Quinn off to prepare to defend the bunker. I only hope that Veil gets another chance to kill Quinn herself before Sunny gets to him.