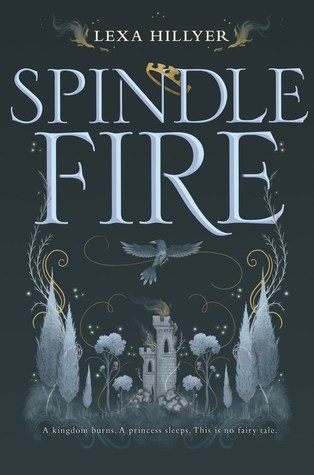 I didn’t find out about Spindle Fire until about three weeks before its release date, but I was excited when I first read about it. I love fairy tale retellings, and I’d been looking for something that would be a kind of lighter read to help me break out of a reading slump I’ve been in for a couple of weeks. I loved the idea of splitting the story of Sleeping Beauty between two girls, the cover is gorgeous, and the title was getting a decent amount of buzz leading up to its release date. Sadly, Spindle Fire turned out to be a dreary slog of a book. The sisters, Aurora and Isabelle, barely interact and only in the first couple chapters; both Aurora and Isabelle have significant disabilities, but the way they are handled in the text is not great; the romances are at once overwrought and dull; the major “twist” is heavily telegraphed; and the book just, overall, feels choppy and disjointed, with more focus on randomly (and occasionally nonsensically) pretty turns of phrase than on building a coherent plot or cohesive character arcs.

I didn’t expect this book to be all about sisterly love and bonding, just going on the marketing copy. It was obvious that Aurora and Isabelle would be going on separate adventures, presumably to link back up in the second book of this planned duology. However, though their sisterly relationship is moderately well-presented early on, once they part ways neither one of them spares much thought for the other. Instead, they’re each more focused on the boys they meet along the way, which is tiresome. This also ties into how the girls’ disabilities are portrayed. At the beginning of the book, it’s made clear that Aurora and Isabelle are very close in part because of their respective disabilities, that on some level they need each other. Once they part, though, Isabelle’s blindness is barely a hindrance—largely compensated for by her other senses, which are written as greatly heightened—while Aurora finds her disabilities (she can’t speak and has no sense of touch) completely, conveniently erased.

There’s nothing in particular that’s offensively bad about any of this, though Lexa Hillyer does rely on some very tired tropes. Aurora’s sensual/sexual awakening could be potentially interesting in the hands of a better writer, but what little action Aurora gets is kept strictly PG and her love interest, Heath, is kind of an asshole, even to her. Isabelle’s love triangle, on the other hand, is shamefully boring, setting her up to choose between a pair men who must surely be the blandest dudes in two kingdoms. Gilbert the stable boy barely has a personality at all, and he’s conveniently shuffled off (via being lost at sea and presumed dead, natch) to make room for William, who is perfectly nice and a seemingly dutiful prince, except when it comes to doing the dutiful thing and trying to wake up Aurora and unite their kingdoms. He’d much rather just marry Isabelle after knowing her for a couple of days, which is his only real character trait. The problem with all of this romance stuff, in any case, is that none of it every manages to be romantic or sexy at all.

All throughout the book, one gets the sense that it was written from a strict outline, possibly with each chapter written separately and then published with little attention paid to continuity or foreshadowing or making sure that the story flows together or makes sense at all. While most of the chapters were told from Aurora and Isabelle’s points of view, neither of them has a distinctive enough voice to be truly compelling, and the POV chapters from other characters primarily function as infodumps, flashbacks or ham-fisted attempts at surprise reveals. Spindle Fire is a book without a strong narrative core, and the POV chapters don’t revolve around a central story so much as flounder about and jockey for attention despite being, ultimately, forgettable. Several times, I found myself having to go back and reread previous chapters to try and make sense of events that seemed inexplicable, while at other times I could easily predict major developments well in advance. There’s a balance to be found with building tension and surprising readers, and Hillyer hasn’t quite found it yet. The attempts at tension-building were simply frustrating, while the surprises either weren’t surprises at all or were surprises, but in a way that made me scratch my head in confusion.

Considering that Spindle Fire is the first in a duology, I may yet check out the second book when it comes out, just to see if things get better. It’s not at the top of my to-read list, though, as I’m not sure what could be salvaged from this wreckage of a good idea.