Most years, SDCC adds a ton of new shows to my watchlist, but this year was mostly recaps of some shows I already watch (like iZombie), recaps and trailers for shows that I don’t watch (The Walking Dead, Gotham, Agents of Shield, etc.), and just a handful of trailers for actual new shows that look good. As with the super hero stuff and movies, these trailers also have a woeful lack of women, with not a single new woman-led show being promoted, which likely accounts for my general apathy towards most of this year’s offerings. Still, there are a couple of shows coming up that I’m looking forward to, even if none of them are quite what I really want to see.

American Gods looks amazing, you guys. Ricky Whittle is perfectly cast as Shadow, and the rest of the supporting cast is also excellent. I’m a little disappointed/concerned that there’s been no casting news for Sam Black Crow, who figures much larger in the narrative than Bilquis or Easter or the Djinn–all of whom have already been cast–but I’m hoping they’re just saving her as a surprise for when the show finally airs next year.

It’s not much, but I’m glad we got something Trek-related. I’m super stoked about this show, and I can’t wait to see the new crew and have some idea of the plot. I’ve always love DS9 best of the shows, though, so I’m slightly skeptical of this being another ship series. Those always struggled with getting preachy and feeling very after-school-special-y or just with being too episodic without a strong overarching story. That said, it’s not 1995, and I have a lot of hope that this new show is going to reflect the best of some of the newer trends in TV storytelling.

Dirk Gently’s Holistic Detective Agency is among the Douglas Adams books that I haven’t ever gotten around to reading, though I am vaguely familiar with the concept of it, so this show wasn’t even on my radar before SDCC, to be honest. In a largely lackluster year for new shows, this one stands out as a quirky adaptation of a work by one of the great humorists of the genre, and it looks hugely entertaining if you enjoy madcap adventures (which I do).

On the one hand, I’m not sure why anyone thought The Exorcist needed to be revisited. On the other hand, Geena Davis.

I am unabashedly excited for this, just like I have been about most of the recent spate of TV productions of musicals. Laverne Cox looks amazing, and Tim Curry is the Criminologist. The inclusion of the audience participation stuff seems iffy, but I like that they’re taking some chances on incorporating some different things into the production so I’ll reserve judgement on it. I’m not expecting great things from this Rocky Horror, but I think it’s going to be fun to watch once.

I generally prefer Elementary to Sherlock, but I’ll watch three or four more episodes of this.

There are no words for how thrilled I am by The Expanse. It’s the best sci-fi show since Battlestar Galactica in my opinion, and I have every reason to expect season two is going to continue the excellence that characterized the first season of the show. Now I just need them to give us a firm air date for the series so I know how long I have left to get around to reading the second book, Caliban’s War. 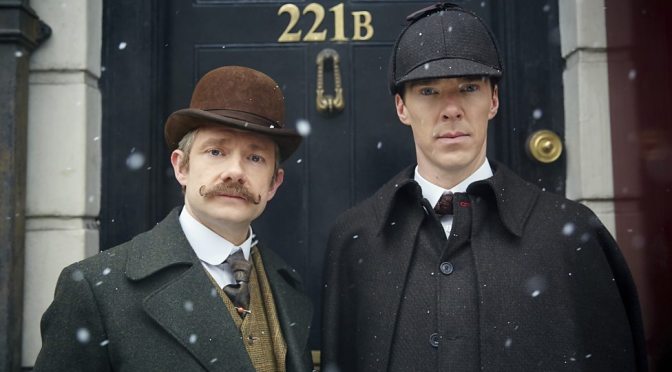 I’m not quite sure how to encapsulate my disappointment and disgust for “The Abominable Bride” in just a few hundred words. Sherlock has never been one of my favorite shows, and it’s far from even being my favorite iteration of the relatively recent spate of Sherlock Holmes adaptations—hello, Elementary. Still, I really liked the first and second series of it. Each of those six episodes was fast-paced, cleverly plotted, and gorgeously filmed, and Sherlock has the distinction of being one of the first shows to integrate text messaging in a way that was both visually interesting and useful to its storytelling.

However, it’s always been a show that suffers from a serious case of Steven Moffat, Mark Gatiss, and their obsession with their ideal of a Great Man who is a total trash monster of a human being but is so full of genius that we’re supposed to forgive his every garbage word and action (that Moffat and Gatiss write). In Sherlock, of course, this is exemplified in the titular character, but the show’s John Watson is also pretty unlikable. Both of these pieces of work—either Moffat/Gatiss OR Sherlock/Watson, I guess—are in rare form in “The Abominable Bride,” which is not a fun old-timey holiday special like it was marketed as, but instead turns out (in a twist worthy of M. Night Shyamalan) to be a journey into Sherlock’s “mind palace” (a phrase and concept so insufferably pretentious that I hate to even type it).

Most of the episode, then, takes place inside Sherlock’s head, and it’s, frankly, a new insight into his character that I wish I didn’t have. The whole ninety or so minutes is just a mix of things that don’t make much sense and things that make me hate Sherlock with a deep and abiding passion. That is to say, it’s pretty much straight fan service at this point, but only for the fans to whom all of Moffat and Gatiss’s worst tendencies are assets rather than annoyances. For me, “The Abominable Bride” was just one long, escalating feeling of outrage.

Probably the worst part of the episode for me was the way it handled its women characters. Largely, this is because none of them are proper characters at all. Instead, they are women the way that Sherlock imagines them.

Mrs. Hudson is a petty, passive-aggressive shrew, and the joke about her is that she’s angry because Watson doesn’t give her any lines in his story. Both Watson and Sherlock are “comically” amazed that she would feel this way and literally point out that bringing tea is Mrs. Hudson’s only function in the narrative.

Mary Watson is an almost mythical presence in Sherlock’s mind palace, but she also, ultimately, is given little to do. Instead, she largely figures into things as a competitor for her husband’s time and affection, and Watson’s neglect of his wife and their marriage is treated as a joke while Mary’s feelings are portrayed (to the degree that they are portrayed at all) as decidedly secondary to her husband’s and Sherlock’s. In the end, Mary Watson is a largely silent figure and cheerfully indulgent of her husband and his friend. It’s as if she is representative of how the viewer ought to feel; we might be irritated with Sherlock and Watson, but we’re also meant to accept it as the necessary price of their greatness.

Poor Molly Hooper may be the worst-served woman in “The Abominable Bride.” Previously on the show, she’s shown some romantic interest in Sherlock, and Sherlock has behaved terribly to her every chance he gets. Here, inside Sherlock’s mind, we see that he, on some level, thinks of Molly as a man. Certainly, he doesn’t think of her as sexual or attractive, and in the mind palace we see this represented with Sherlock’s imagining of Molly in drag. On another level, Sherlock sees Molly as part of a somewhat incomprehensible-to-him mass of womankind—but a mass of women who are also secretive and furtively malevolent.

Throughout the episode are sprinkled numerous running jokes that seem to refer to criticisms the show has received regarding its treatment of women, but they seem more a mockery of the show’s critics than any sincere attempt at conversation. The main “villain” in Sherlock’s mind palace is a secret society of murderous feminists, and by the end of the episode they don’t even matter because they were just a way for Sherlock to work through his feelings about/for Moriarty the whole time.

Probably the worst sin of “The Abominable Bride,” however, is the revelation of Sherlock’s drug abuse/addiction, which has previously gone entirely unmentioned in this iteration of Sherlock Holmes. I do remember an instance in an early episode of Sherlock using multiple nicotine patches, but that’s it. So the reveal here that the whole episode was just Sherlock overdosing on the plane from the end of the last episode came as a surprise, to say the least, but not a good one. The reactions of Mycroft and Sherlock in the real world of the show are totally unearned and inexplicable, a perfect example of Steven Moffat’s tendency to rely on his audience’s arcane fandom knowledge and uncritical suspension of disbelief to make the emotional beats of his stories work. You know, instead of just putting in the work himself to write a stories and emotional/character arcs that feel natural and make sense. 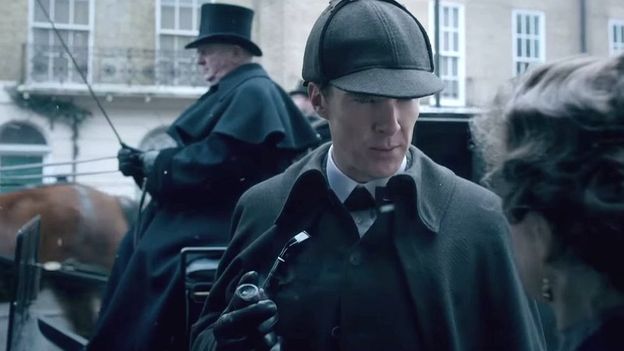 This looks fun. No news on an air date yet, but it’s going to be shown in cinemas worldwide as well.