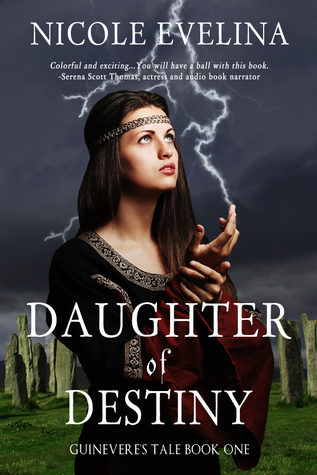 I’ve always found it a little sad that there isn’t more Arthurian literature written about Guinevere, so I was excited when I saw this self-pubbed title pop up on NetGalley and had high hopes that it would offer some new insight or a unique interpretation of the mythology. Unfortunately, Daughter of Destiny was mostly a let down on that score. It’s a fast, easy read, though entirely unexceptional, and while Nicole Evelina may have some historical background, her knowledge of, understanding of, and respect for Arthurian legend and literature is marginal at best. It’s not a bad novel, but it was definitely a disappointment as an Arthurian one.

The story starts off somewhat slowly, as 11-year-old Guinevere is sent to Avalon to train as a priestess, which feels like a page out of nearly every Arthurian retelling from Morgan’s point of view. Unlike most of those retellings, which often focus on Morgan’s relationships with the women she meets there, this first part of Guinevere’s story actually leaps over several years of her training in order to get straight into her senseless rivalry with Morgan and her relationship with, of all people, Aggrivane. I’m not sure which I find more upsetting: the conflation of Guinevere’s story with Morgan’s, the absurd twisting of the regular Arthurian timeline of events, or the general grossness of Guinevere’s relationship with Aggrivane (who is an adult man). It’s all completely unoriginal and establishes early on that the author doesn’t know or care much about the literary tradition she’s working within.

After graduating from priestess training, Guinevere doesn’t actually become a priestess. Instead, she’s sent back to her father, Leodgrance, who has become a Christian since the death of Guinevere’s mother. We’re told that Guinevere is extremely sad about her mother’s death, but the majority of Guinevere’s time in Northgallis deals with her relationship with her father. This does touch upon a common Arthurian theme—the conflict between the indigenous religions and traditions of Britain and the Christianity imported during the Roman occupation of the country—but in a very shallow manner. Rather than exploring these larger ideas, Evelina dwells on relationship drama, even contriving to have Aggrivane show up at Northgallis in order to create a situation that gets Guinevere sent away to the story’s next setting.

In Pellinor’s household, Guinevere meets Elaine (Pellinor’s daughter) and Isolde, both characters who usually have their own interesting roles to play in Arthurian legend. Here, though, Elaine is a quiet, strange girl in thrall to her domineering mother, Lyonesse, and obsessed with finding a man who she believes she is destined to marry. Isolde is the heir, in her own right apparently, to the throne of Ireland, but she’s kept practically as a servant in the household, where she spends her time sleeping around (as one does when one is a young princess in a time before birth control, I guess) and giving pages-long speeches of exposition to Guinevere. Guinevere and Isolde are supposed to be great friends, but the relationship isn’t very developed, and what passes for court intrigue is little more than mean girl antics.

The climax of the novel is a grand tournament held by Pellinor to entertain the new High King, Arthur, but there’s not much action to be had here. Guinevere again resumes her affair with Aggrivane, and they hope to marry, but instead Guinevere ends up promised to Arthur, who she has had almost no contact with whatsoever. She’s upset at first, but seems to be getting into the whole “being queen” thing by the end of the novel. Even Aggrivane doesn’t actually say anything in protest, even though he had been assured by his own father that marriage to Guinevere was a done deal. It ends up feeling like a betrayal of the whole book up to this point, with no foreshadowing or anything to prepare the reader for this. Obviously, as someone familiar with the story, I wasn’t surprised to have Guinevere paired off with Arthur—that’s a non-negotiable facet of the legend and was definitely going to happen by the end of the book—but it felt incredibly unearned here, as if the author expected it to be a shocking turn of events. Instead it just seemed silly and calls into question the purpose of the entire rest of the book.

There’s no particularly new ground covered in Daughter of Destiny. It borrows heavily from The Mists of Avalon and similar feminist interpretations of the Arthurian mythos, but without any real understanding of the things that make those stories compelling. Although she has some admirable (albeit generic) qualities, Guinevere is a passive character throughout her own story, with very little agency. Her singular rebellion (outside of her ill-advised relationship with Aggrivane) is to secretly continue her weapons training, which connects her to her dead mother and to her ancestral people, but this is never fully explored and is also never once relevant to the plot. Meanwhile, every major event in Guinevere’s life is determined by the men who control every aspect of her present and future.

[This review is based on a copy of the novel received through NetGalley.]