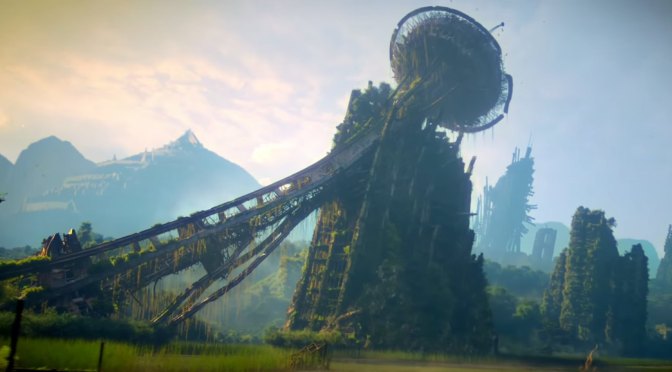 Though I loved them as a teenager, I don’t think I’ve even cracked the spine of a Shannara book in at least ten years. Still, I was delighted when I heard there was a television series in development based on Terry Brooks’ novels. With so much recent fantasy fare that is decidedly grimdark, The Shannara Chronicles is a much-needed palate cleanser, and since I’m a sucker for nostalgia projects there was basically no chance that I wasn’t going to watch (and love) this show. It’s definitely the most fun I’ve had watching a fantasy epic in a long time, and I would even argue that it’s solidly well-conceived, with decent acting, good plotting, and nice pacing.

The opening shots and credits for The Shannara Chronicles are absolutely gorgeous, and the whole show so far is just one stunning piece of CGI scenery porn after another. It’s so pretty that I don’t even care that after thousands of years, none of the metal structures they show would still be standing in any form. It’s not as if the broken Space Needle, desiccated ship, or various rotten vehicles and satellite dishes and so on add any particular sense of realism to the setting. They are cool, though, and the vivid, highly saturated colors put this show essentially one Tangerine Dream soundtrack away from aesthetic perfection. I can even forgive the show for creating an elven city that looks—no joke—like they just tried to imagine what might happen if Lothlorien and Minas Tirith had a baby city in the post-apocalypse. In fact, I rather like this kind of overt callback to LOTR. It’s probably best for Shannara to just own its heritage right out of the gate.

The costuming is nicely contemporary-feeling, but without just being a showcase for designer dresses like some other teen shows. I don’t feel like I’ve been transported in time when I see the show’s elves or Rovers, but I also don’t feel like I’ve been transported to prom night at a prep school. The costumes for Amberle and Eretria are reasonably practical for the activities the women are engaging in, which I appreciate, and neither of them is overly sexualized.

The show in general displays a pleasantly frank attitude towards sexuality, in line with its YA sensibility and current trends in YA fiction. There’s no sex actually confirmed to be happening, but Amberle is not assumed to be virginal, in spite of being an elf princess. Her aunt actually assumes otherwise when Amberle goes to her for help, thinking that the princess could be dealing with an unwanted pregnancy. While this is somewhat played for laughs, it’s indicative of the show’s relaxed way of dealing with teenage sexuality—in this future world it’s normal, accepted, and issues seem to be handled practically and non-judgmentally. There is a love triangle suggested (Amberle, Wil, Eretria), but the show so far hasn’t made romance a too-central part of the story it’s telling. Instead, it seems more concerned with just introducing us to the characters, introducing the characters to each other and getting on with the adventure.

The actual story is pretty pedestrian stuff—an evil dark lord coming back with demons, a farm boy with a great destiny and a secret heritage, Manu Bennett as sexy Gandalf—but it’s done well, and I’d always rather see a derivative tale told nicely than an avant garde disaster. The show definitely struggles with dialogue in this first episode, though. Although I’m not always hip to kids’ lingo these days, I actually enjoy the teen-speak of the young adult characters, but there were more than a few hilariously bad speeches. Hopefully this will get worked out better in future episodes as they find a balance between creating relatable young characters and plausible fantasy heroes. One area the writers shined in, on the other hand, was in incorporating expositional dialogue. So many sci-fi and fantasy projects get bogged down with clunky, uninteresting exposition, but this one works it in pretty deftly. I won’t say it’s not noticeable, but it’s not ham-fisted or dull.

Probably my favorite thing about the show so far, though, is the ways in which it improves upon the source material. Admittedly, it’s been a good while since I read the book, but I remember it as heavily focused on Wil, with Amberle in particular as a much less active character. Here, though, Wil’s hero’s journey exists in parallel with Amberle’s and they support each other on their way. Even Eretria seems a bit more lifelike than I remember, though it’s not clear yet where she fits into the bigger story except as the other prong of the love triangle. Regardless, it’s nice to see the story kind of updated and expanded to give the girls larger and more heroic roles, and I’m legitimately excited to see what happens next.

I didn’t expect this show to be good at all, but it looks like it might be. Everything in this reel shown at SDCC looks incredible, and I’m looking forward to a light, fun alternative to Game of Thrones.

I’m really encouraged by the fact that it looks like they’re preserving the post-apocalyptic world of the Shannara books instead of turning it into a generic fantasy setting. Judging from what we see here, it looks like MTV has really captured the sense of a magical world built upon the ruins of something much more familiar to us.