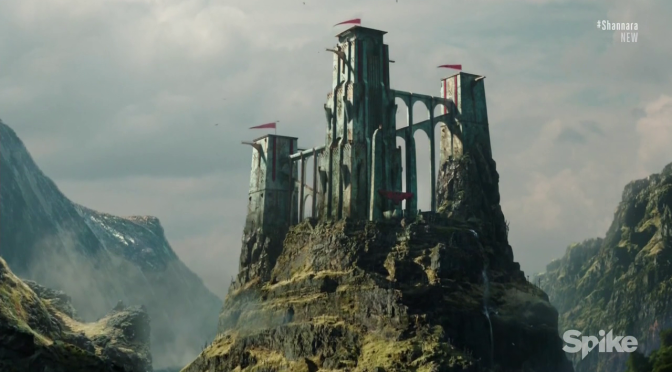 After a slower, soapier hour last week, The Shannara Chronicles is back with a more action-focused hour in “Graymark.” Short scenes continue to give an illusion of a fast pace, but this is coupled in this episode with an actually fast—one might say too fast—pace. Seriously. A lot of ground is covered in “Graymark,” which is exciting, but the speed with which all this travel and story happens has the unfortunate effect of making the world of Shannara feel remarkably small. This lack of epicness plagued the show’s first season as well, but the first couple episodes of season two involved somewhat less travel and the time-lapses between events within those episodes were handled a little more deftly than they are in this one, making it less notable. In an episode focused largely on a single major event/quest, it would have been nice for it to have more of a feeling of consequence. What I loved about “Graymark,” however, is how unabashedly high fantasy it is. The Shannara Chronicles has always been a show that owned its late-70s-to-mid-80s origin, but it was in rare retro form this week.

The episode opens at the titular fortress—complete with unsubtly Nazi-ish decoration and a whole lot of razor wire—where Allanon is being imprisoned and tortured by General Riga, who is dead set on rooting out and banishing all magic from the Four Lands. The way to do that, Riga thinks, is by destroying the Codex of Paranor, which is the repository of all remaining druid knowledge. Allanon tries appealing to Riga’s sense of justice and points out that the Warlock Lord is their common enemy, but Riga insists that “the true enemy is magic.” Having no luck with torturing the information he needs out of Allanon, Riga’s plan is to hunt down Wil Ohmsford and torture him until Allanon gives in to Riga’s demands. Fortunately for Riga, he doesn’t have to do much hunting.

Immediately after the opening credits, Eretria has managed (with a little help from Garet Jax) to track down Wil. As great as it is to have Wil and Eretria reunited, this all feels a little too easy and convenient. The two of them do have a couple of good conversations, though some of that was recapping season one events, presumably for viewers who are new to the show this year. The important thing, though, is that Eretria brings the news of Allanon’s capture by General Riga right at the time when Wil needs to find Allanon for his own reasons (to save Flick), so the two of them, along with Garet Jax and Mareth, are going to go extract Allanon from Graymark. And that’s basically the rest of the episode.

It’s a great quest adventure set-up in the high fantasy tradition, with clear stakes and a straightforward plan and it goes about how anyone familiar with the genre would expect. I only wish it had been given a little more room to breathe instead of smushing all this story into a single episode.

It’s not even that there’s just so much story here. There’s just an awful lot of torture, and it’s unpleasant to watch. Depictions of torture in general can be fraught, not least because torture is not a thing that works, which makes it irresponsible to depict in a favorable light. The good news is that’s not what’s going on here. Neither Allanon nor Wil are willing to give in to Riga’s torture. The bad news is twofold: first, the torture is depicted with an almost pornographic relish, which is gross, and, second, it undermines Riga as a sympathetic villain. Even as we learn about the death of Riga’s wife and unborn child (sigh) and his mother being attacked while pregnant by the magical creatures whose influence made Riga himself immune to magic, we see scene after scene of Riga coldly and viciously torturing two of the show’s main protagonists.

One gets the sense that Riga has some fundamental principles that he’s guided by and that his war against magic is something of a crusade that he feels morally justified in waging, but the way he tortures Allanon and Wil seems unbound by any rules of engagement or ethical concerns. If torture was a tactic that worked, it might be possible to accept it as part of the fantasy setting, but it’s shown two or three times over in this episode to be ineffective, making Riga’s continued reliance on it morally indefensible. He learns nothing of value here and doesn’t advance his cause at all, so his decision to use torture ends up feeling either profoundly stupid or indefensibly cruel. If Riga is stupid, it undermines his status as the most compelling villain of the series so far; if he’s wantonly cruel, it makes it really difficult to see him as sympathetic or misunderstood and diminishes the chance of any kind of redemption for him. Regardless, it’s not a good look.

What does work, surprisingly enough, is the plan for how to escape Graymark. It would have been nice to see a little more of the planning process, and the episode is a little hand-wavy about some things (like, how did Garet Jax get that map of the fortress?), but the plot of the episode is smartly put-together and well-executed. While Eretria’s reunion with Wil seemed easily accomplished earlier in the episode, there are enough real challenges in the course of this rescue plan to provide a sense of real drama and concern for the characters. Eretria and Mareth both get opportunities to use their particular skills to further the quest, and they even seem to be becoming friendly after each of them being somewhat suspicious of the other on first meeting. The episode even manages to provide space for some Garet Jax back story, though he’s not completely demystified by the end of the hour. While there’s a lot going on, and I would have liked to see more of some of the non-torture parts, what we did get on screen is nicely balanced between action, exposition and character work.

The best part of the episode, of course, is the final action scene as Allanon, Wil, Eretria, Jax, and Mareth finally escape from Graymark. It’s a well-choreographed fight scene, we get to see some magic, and all the characters get a chance to shine a little. The rain was a bit much, but it looked cool and, really, that’s what matters.