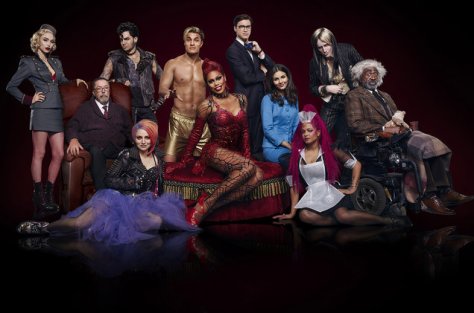 Remakes of old movies are probably never necessary, but they can often be redeemed if they can breathe new life into old stories and present the audience with a fresh perspective on dated material. Sadly, Fox’s clunkily titled The Rocky Horror Picture Show: Let’s Do the Time Warp Again does neither of these things. Instead, it somehow manages to sanitize and straighten a classic piece of queer theater and highlight all of the problematic aspects of the original film at the same time.

First things first, though. There are a few things to like about this new production. Laverne Cox (while in my opinion miscast—more on that later) sparkles in the role of Frank, and a couple of her songs are truly excellent. Annaleigh Ashford’s Columbia is pitch perfect, and she does the best job of anyone on the cast to make this role her own. It’s good to see a production that is so diverse in its casting in general, and this is especially apparent in the crowd scenes. Finally, the costumes are pretty great.

So, this new Rocky Horror isn’t a complete disaster. Still, it’s not good, either.

From pure craft standpoint, this reimagining of Rocky Horror is a bit of a mess. The framing device of the theater and the choice to include some of the audience participation that is common at the still-ongoing midnight showings of the original film sounded interesting when the show was in development and suggested a sincere attempt to introduce a new generation of young people to Rocky Horror. The execution of this concept was terrible, though, from beginning to end. Even decisions that in theory work really well to set this production apart from the 1975 movie—for example, the choice to cast the Usherette for the show’s opening number—fail to hit their mark.

Ivy Levan’s soulless rendition of “Science Fiction Double Feature” is illustrated with her empty-eyed vamping around an old-timey movie theater with no coherent sense of tone or meaning. Like, I literally don’t know what they’re going for here. Similarly, while Reeve Carney’s performance as Riff Raff is overall workmanlike, his introductory solo (in “There’s a Light (Over at the Frankenstein Place) is characterized by absurd overproduction and a truly bizarre set of incomprehensible facial expressions. It’s genuinely weird and not in a good way. This kind of emotional disconnect is (with a few exceptions) a consistent thread throughout the show, as if everyone learned the words of their songs but had no idea how to bring any of the characters to life. Lowlights include the worst version of “The Sword of Damocles” I’ve ever seen and a “Planet Schmanet Janet” that wildly misses its mark, tone-wise.

The whole show would likely have benefited from live performances, which might have felt more organic. Instead, everything kind of ranges from somewhat to ridiculously overproduced, which gives the whole thing a slightly sterile feel that is enhanced by the too-clean cast and pristine (if nice-to-look-at) costumes. There’s an affectation of high camp here, but it’s too self-conscious and purposeful to have the disheveled charm of the original. Probably the perfect example of what I mean comes when we get to the floor show. Frank has Columbia, Rocky, Brad and Janet decked out in gold costumes with gold makeup, but the makeup doesn’t run when they move to the water. The original Rocky Horror had a messiness, a sort of homemade quality, that made its weird world feel real and lived in, and this remake doesn’t have that.

Perhaps the greatest sin of this Rocky Horror, however, is the sheer sexlessness of it all. There’s very little chemistry between any of the characters. Brad and Janet seem not just innocent and unworldly, but practically childlike. The connection between Columbia and Eddie feels real enough, but it’s such a small, fast-moving section of the film—and with the dinner party scene missing its cannibalistic implications—that it isn’t actually very impactful. Laverne Cox is stunningly beautiful and oozes sex appeal, but all of Frank’s interactions with other characters have been toned down so much that it’s never actually clear if any sex happens at all. Instead, everything comes off as just slightly saucy play. This is also true of Janet’s big song, “Touch-a Touch-a Touch-a Touch Me,” throughout which she and Rocky gambol around a bed like a couple of thirteen-year-olds having a sleepover—I don’t think he even touches a boob. Meanwhile, Columbia and Magenta are very specifically non-sexual in their interactions. Even the climactic orgy in the pool is stripped of most of its sensuality. Lips barely even touch, and none of the ones that do belong to two women.

Even stripping most of the sex out of the show and making what remains almost aggressively heterosexual doesn’t allow the show to completely avoid the problematic messaging of the original. In fact, it almost highlights these things even more, and the casting of a trans woman as Frank actually deepens some of the more unfortunate implications of Frank’s predatory behavior. The toning down of Frank’s “seduction” of Brad and Janet here accentuates rather than mitigates that this is rape. While there’s less actual sexual content to the encounters, the coercion is exaggerated and then highlighted by the absence of any sense that Brad or Janet are overcome by either passion or pleasure. Instead, their decisions to give in to Frank’s advances feel both more calculated and less earned.

Rocky Horror has never been a paragon of sense-making cinema, but this production turns absurdity into straight up gibberish. It does nothing to address the problem of the damaging and dated depraved queer trope, and even adds a new dimension to it by inserting a trans woman into the role of Frank—which feels especially irresponsible in a time when public fears of trans women continue to incite violence and are motivating anti-trans legislation all over the place. Sure, the ultimate “message” of Rocky Horror is still about sexual freedom, but what was significantly transgressive forty years ago is positively tame by modern standards and made more so by the determined effort to sanitize and straighten the production so it could be aired in an 8:00pm Thursday timeslot.