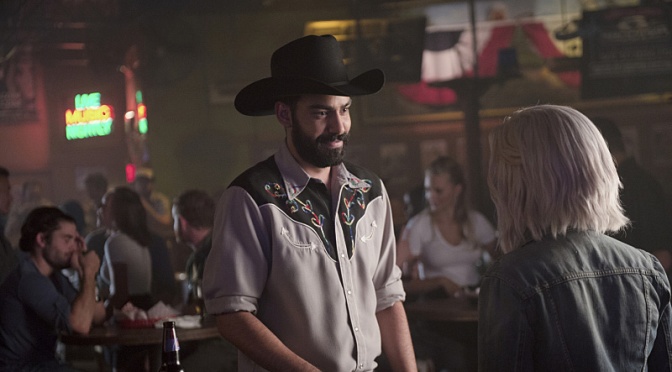 iZombie surprised me this week, by following up last week’s very good episode with another that I like even better. “Even Cowgirls Get the Black and Blues” is an episode about heartbreak, which it deals out in spades, and, relatedly, the ultimate randomness and meaninglessness of the universe. Nevertheless, this is also an episode full of hope, although I wouldn’t exactly call it optimistic, either.

The biggest surprise this week by far was how much Peyton was in the episode. Last week, we seemed to have gotten her back in exchange for no Blaine at all, but this week we get some of both—and both together, which is something I never knew I always wanted. Peyton and Blaine together is only my second favorite development of the episode, though.

The very best thing that happened this week? Peyton and Liv’s actual reunion at the start of the episode. After the last few episodes, which really focused on the breakdown of basically all of Liv’s relationships and Liv’s growing feelings of isolation and disconnectedness, it’s so nice to see something in her life going well. I was a little concerned last week when Peyton just left the birthday cake for Liv, but it turns out she really was just busy. When Liv tracks Peyton down at the gym, Peyton is pleased to see her friend, apologetic about the months of radio silence, and ready to talk about things.

Unfortunately, Liv is called away to help Ravi, but this isn’t the last we see of Peyton. Honestly, though, after all the time this show has spent sidelining and just plain disappearing Peyton altogether, I find it a little hard to credit this turnaround in their treatment of this character. This week sort of doubled down on Peyton’s storyline from last week and tied it together with Blaine’s in a way that makes me think that Peyton is going to continue to play a significant role in this season’s overarching plot. That said, the show has teased Peyton’s importance before with no payoff, so I’m trying to manage my expectations about this until I see at least a few more episodes in this same vein.

Blaine, of course, is shaping up to be a great villain, and this week he’s delightfully evil as he continues looking for the recipe for the tainted Utopium from the boat party. I pretty much loved everything about every scene Blaine was in this week. His texting henchman is excellent, and all of the Blaine scenes this week had the great balance of darkness and humor that characterizes this show at its best.

Aside from Peyton’s return, the other big emotional component of this episode concerns Liv’s relationship with Major. I’m very surprised to see this plot moving along as quickly as it seems to be, although I’m also not convinced that this really is Major’s rock bottom. If it is, it’s going to be profoundly unsatisfying and will really cement Major’s position as one of the most boring ex-boyfriends on television.

In basically every way possible, Major behaves abominably to everyone he comes in contact with this week, which is par for the course with this fetid pile of unexamined privilege. The difference between this week and every other week, however, is that we’re actually starting to see him being called out on it. Peyton has been back all of two days and has noticed what a weirdo Major is being. Ravi actually confronts Major about his bizarre behavior. Even Liv finally goes to Major and tells him that they are for real over. And then Major shows up on Liv’s doorstep and it looks like maybe this thing is back on—although I’d call it even odds that making out with his zombie ex-girlfriend might just be another rung on Major’s descent into crisis.

The problem with Major, of course, is that he’s just plain unlikable. I think I could deal with that if Major’s character arc was taking him towards being a villain, but he’s just awful as a romantic hero. Peyton’s return and her reunion with Liv, with its hugs and apologies and empathy, really helps to highlight just how terribly unreasonable Major has been in the way he’s treated Liv. It was gratifying this week to see Liv herself get to call Major out for this, but the ending of the episode reveals just how much Liv is still dealing with her own feelings of self-loathing, guilt, and shame—and how vulnerable and starved for affection she really is.

Overall, “Even Cowgirls Get the Black and Blues” is a solid episode. The murder mystery sort of fades into the background, and the effects of the murdered woman’s brain on Liv was subtly and sensitively handled, which was a nice change from some recent episodes where Liv picked up a few too many of her brains’ worst qualities. I liked the way that the randomness of the murder ended up echoing the randomness of Liv’s being turned into a zombie in the first place, and it was good to see Liv starting to deal with her feelings in a better way than she has been. Key to that development is Peyton’s return, and it’s very clear that Peyton’s forgiveness and acceptance of Liv is vitally important. I just hope that Peyton sticks around this season.