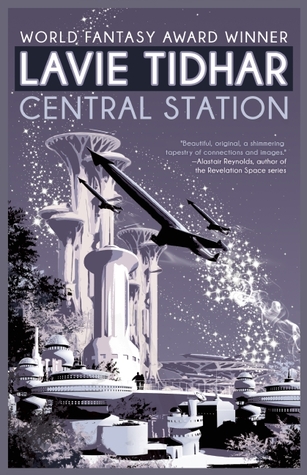 It would have been useful to know in advance that Central Station is a novel that was cobbled together from a collection of related short stories. While there is much to love about the finished product, it nonetheless has a somewhat disjointed feel to it that makes it somewhat difficult to fully appreciate the novel’s strong points. It’s not incoherent, exactly, just slightly garbled in execution, which is too bad because Central Station is otherwise a gorgeously imagined, smartly written, ambitious work of thoughtful futurism.

Perhaps the strongest aspect of Central Station is Lavie Tidhar’s lovely prose, which brings his vision of a future Tel Aviv to life with great depth and richness. There’s an almost magical, mythmaking quality to his descriptions of Central Station, its inhabitants and their lives that reminds me of nothing more than Ray Bradbury’s The Martian Chronicles, to which Central Station is an obvious successor, if not intentionally than certainly through serendipity. While most of Central Station’s chapters have been edited so that they no longer entirely stand alone, there is still the feeling of it being constructed from a series of slice-of-life vignettes clustered around an overarching narrative—primarily concerned with the comings and goings of people through Central Station, which is here a major hub of travel between Earth and space—and core themes—mostly perennial sci-fi big ideas about war and religion and artificial intelligence and robots and how technology effects the human condition.

Along with crafting a striking and memorable setting, Tidhar has also populated his future Tel Aviv with a fascinating cast of characters. Sadly, this is another area in which the book is sold short in the marketing department, as its cover copy focuses on introducing Boris Chong as if he’s the main protagonist of the novel. Certainly, Boris’s experiences are important and effectively work as bookends to the rest of the stories, and the book description correctly communicates that Central Station is a sort of family drama, but Boris actually turns out to be one of the least compelling characters in the book. Instead, I found myself drawn more to Boris’s ex-lover, Miriam, Carmel the data vampire, the book dealer Achimwene, and the robot priest R. Brother Patch-It. Even the fraught romance between Boris’s cousin Isobel and the robotnik Motl somewhat overshadows Boris’s contribution to the narrative, which makes the decision to sell the book as Boris’s story somewhat unaccountable.

The missteps in the back cover copy of the book are mostly made up for, however, by its absolutely stunning retro-futurist cover by Sarah Anne Langton, which is more than enough reason to have it on your shelf. It’s a perfect package for such a lovely book, and it nicely telegraphs the fusion of classic sci-fi themes and posthumanist sensibilities contained within its pages. There’s very little new under the sun when it comes to storytelling, and Tidhar hasn’t reinvented the wheel with this book, but he definitely brings a refreshingly new and important perspective to the material he tackles. Central Station is a book that is perhaps too “literary” to get the readership it deserves, but it’s certainly worth a look for any serious reader of science fiction, especially if you think you prefer the classics.