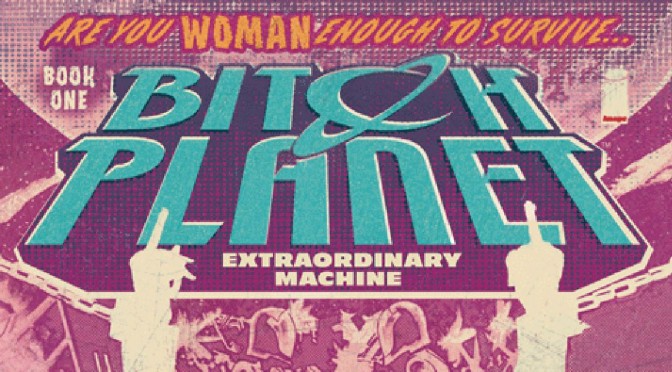 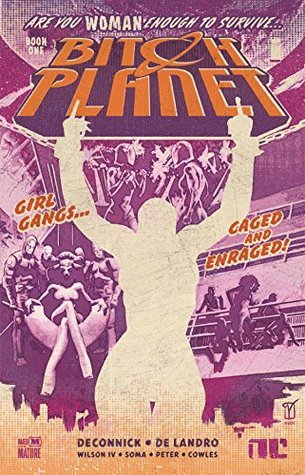 I can’t believe I waited so long to read this comic. Like, I’m truly appalled at myself, and now that I’ve read the first five issues, I can’t even remember why I hadn’t been that interested. Bitch Planet is a gorgeously drawn, tightly plotted feminist masterpiece that should be required reading for women everywhere. It’s also brutal and heartwrenching and more than a little uncomfortably close to the truth of many women’s experiences.

The first issue is a shocking bait and switch that sets up the rest of the story, which deals with a group of women judged “non-compliant” and sent to an off-world “Auxiliary Compliance Outpost” colloquially referred to as Bitch Planet. It’s exactly as terrible as it sounds like, and women are imprisoned there for any number of offenses from “wanton obesity” to being a bad mother to murder. It’s as if The Handmaid’s Tale had a comic book baby with a prison exploitation film; as in Margaret Atwood’s classic, the most terrifying part of Bitch Planet is how familiar it feels.

The standout issue of the first arc is definitely #3, which is the first of several issues planned to deal with the story of a single character. This one is about Penny Rolle, and it’s equal parts chilling—with lines like “…see yourself through the fathers’ eyes” and “How long since you prioritized how others see you?”—and empowering. It’s an incredible story of oppression, abuse, and dehumanization—and how a woman can survive those things with her identity and spirit intact. It also does more than any other issue so far to frame non-compliance as active resistance—to be non-compliant is to be victimized by a system that despises women, but it is also a sign of resilience and can be a source of pride.

The only problem that I have with this collection of the first five issues is that it doesn’t include the original comics’ wonderful supplementary materials. Each issue contains essays that complement and expand upon the issue’s themes, and those are further supplemented by letters and, increasingly, photos of folks’ rad NC tattoos. While the comics certainly speak for themselves and can be read and enjoyed just fine without the extra materials, the essays in particular add valuable context and depth to each issue that isn’t made up for by just tacking on a short study guide at the end of the collection. It might be hard to get your hands on the print issues, but digital issues are cheap.