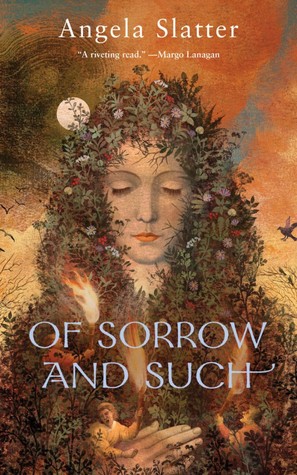 Of Sorrow and Such is a thoughtful piece of work whose contemplative tone would be restful if its subject matter wasn’t so infuriating. I love a good witch story. The thing is, stories about women being mistreated make me actually angry. This one does so in a great way.

I adore witches of all sorts, and I have had a special place in my heart for these sort of vaguely historical witch stories since the first time I read The Witch of Blackbird Pond over twenty years ago. Edda’s Meadow is much less historical and much vaguer as a setting, but it definitely scratches that same itch. Also like The Witch of Blackbird Pond, Of Sorrow and Such is a book that is fundamentally (even more so, really) concerned with the relationships between women and how we help each other survive (or not) in hostile, sometimes murderously, misogynistic societies.

I think what I love best about witch stories is the way that they work on multiple levels to examine ideas about how women exist in the world. To be a witch is both a metaphor and a depiction of a kind of reality, and not just a historical one. Angela Slatter’s practiced deployment of these ideas tells me that she knew exactly what kind of story she was writing, and she skillfully manipulates her characters and setting for maximum emotional effect.

Mistress Gideon is a great character. In many ways she’s exactly the sort of woman that can be a role model for readers, but Slatter never places that burden upon her protagonist. She’s therefore allowed to be much more than that, and Slatter gives us a main character who is kind and wise and motherly and loving and fiercely protective of her daughter and friends, but who is also not all-knowing, who can be cruel when she thinks she needs to be, and who is quite capable of murder.

The other women that surround Mistress Gideon are just as well-drawn. Her daughter, Gilly, is both lovable and infuriating. The other women we meet also have their own assortments of good and bad qualities. From the passionate young shapeshifter who desperately wants to be herself to her repressed spinster sister-in-law to the pastor’s wife who won’t leave her husband but also won’t submit to his literally poisoning her, these might not be women I want to be, but they are certainly lifelike enough that I can imagine meeting them.

This, really, is Angela Slatter’s gift. She brings these characters to life and I love them and want to read more about them. Though this is the only thing I’ve read by this author, it’s most assuredly only the first thing. I am very much looking forward to reading more of her work in the future.