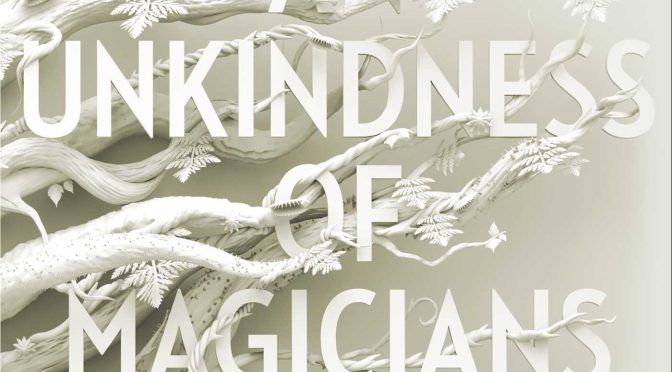 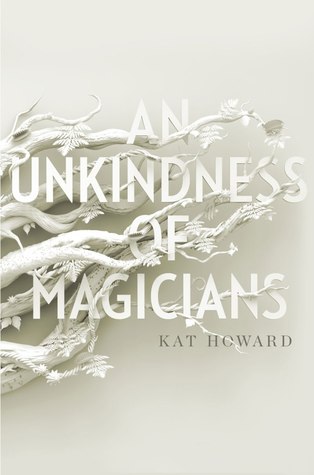 I liked Kat Howard’s debut novel, Roses and Rot, quite a bit and even more in hindsight, and I’ve enjoyed the several pieces of short fiction I’ve read from her since, but An Unkindness of Magicians is still a surprising book. Thematically, it covers a lot of the same ground as Howard’s other work, and like her previous novel this one deals heavily with family drama and magic. However, at its core, Unkindness is nicely summed up by the well-chosen epigraph, a memorable line from Peter S. Beagle’s The Last Unicorn, with which it opens:

“Real magic can never be made by offering someone else’s liver. You must tear out your own, and not expect to get it back.”

An Unkindness of Magicians opens with a singularly powerful image that introduces our heroine, Sydney, and gives us our first glimpse of the magic that fuels so much of the action in the book. Unkindness has been compared in some reviews to The Magicians, and though I haven’t read that book, it certainly shares some commonalities with the television adaptation. Like the magic in The Magicians, magic in Unkindness is often less about doing useful things and more about magicians putting on a great show for each other. Sure, characters use magic for some mundane tasks, but the big stuff is mostly theatrics until late in the book. The opening scene of Sidney’s impressive spellcasting as she auditions for a prestigious job is vividly described and immediately shows the reader what kind of book this is: smart, confident and beautifully written.

Howard’s first novel occasionally felt weighed down by its sometimes-heavy themes, but this one is a bit more structurally sound. It’s a good thing, too, as Unkindness is a good deal darker than Roses and Rot. One thing that helps this book immensely in this regard is the large ensemble cast. Sydney is definitely the fulcrum around which the main plot and all the other characters pivot, but with other characters capable of doing some heavy lifting, she’s never forced to carry the full weight of story or themes on her shoulders. The best part, though, is that, while characters like Laurent and Ian hold up their parts of the book quite well, Sydney is also surrounded by female characters who have stories and goals of their own while supporting Sydney and being supported by her in turn. Harper, in particular, is such a wonderful secondary protagonist that I can’t help but hope to someday read more about her.

The Unseen World is sexist and racist and classist, there are no fewer than three huge injustices (and quite a few smaller ones) being addressed in this book, and Howard does a great job of telling her story from multiple points of view that allow the reader a broad understanding of the world she’s crafting. That said, the villains in Unkindness only manage to be about two-and-a-half-dimensional, with motivations that aren’t always completely explicable. Miles Merlin’s fear of aging and Grey Prospero’s pathological desire to excel as a magician at any cost make sense, but there’s a certain level of “evil gonna evil” throughout the book. This makes more sense for Miles, who simply dehumanizes the people he hurts so much that he seems to genuinely not think he’s doing anything wrong; like all of the worst {X]-ists, Miles Merlin is nothing if not certain of his own moral rectitude.

This is less true of Grey, whose crimes are much more personal. Miles can tell himself that he does what he does for the good of all the Unseen World, but Grey is explicitly self-focused, intent on amassing personal power through his exploitation of others. Grey’s storyline (and Harper’s corresponding quest for justice) could be interpreted as metaphorical for rape and the difficulties rape victims face in trying to get justice; Grey’s violence is indeed gendered, and the way his privilege protects him is indeed reminiscent to many of the ways in which rapists are treated, but his degree of violence and the magical benefits he gains from it make it a flawed analogy at best. Howard makes her point on the issue, but without the finesse or the unambiguous success with which she accomplishes other goals in the book.

Any other criticisms of the book are simply quibbles. The New York setting has been praised by some as authentic and recognizable, but I found it somewhat generic-feeling. The naming conventions—Prospero, Merlin, Morgan—were a little on the nose, and it undercut some of the seriousness of the novel. Overall, though, it’s a highly readable book full of evocative prose, with a thoroughly lovely ambience, a snappy pace, several cleverly-plotted mysteries, and a conclusion suffused with the great catharsis of seeing justice done.

This review is of a review copy of the title received from the publisher.