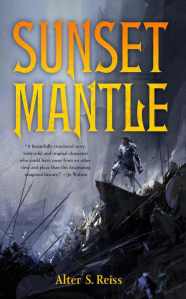 Sunset Mantle is a sort of strange little book. It’s an interesting mix of things that I love (epic fantasy, low key romance, a huge battle scene) and things that I usually hate (military stories, few women characters, overly stoic and maladaptively principled hero), and I’ve kind of fallen in love with it.

Cete is exactly the sort of outcast slightly grizzled warrior character that would normally bore me to tears, but the first thing we learn about him is that he appreciates and longs for beautiful things. This is a simple, honest desire, and it’s a small aspect of the character of a man whose only business and skill is death, but who loves art. It’s this desire that is always at the core of the story in Sunset Mantle, and its frankly miraculous that Alter S. Reiss manages to make this novella work without it becoming mawkish and trite, but he does.

Marelle, the artisan who created the titular sunset mantle, is kind of a fascinating character to me. I really appreciate the first physical descriptions we get of her which are pleasantly unsexual and focus on qualities that are representative of her experiences and the unique ways she exists in the world. Her age is unstated, though it’s clear that she’s a young-but-mature woman, and her beauty or lack thereof is never remarked upon, though it’s shown amply later in the story that Cete at least finds her desirable. In the beginning, though, we learn about the way she carries herself, the ways that hard work has marked her, and the way she smiles directly at Cete–“the smile of one man to another, rather than that of a woman to a man.”

This particular passage is one that Reiss handles with delicate precision, establishing Marelle as a character who is both comforting and challenging to Cete and establishing Cete as a man who (sadly unusually in the epic fantasy genre) respects Marelle in a way that is refreshingly unpatronizing. The first two pages of this novella might be my favorite thing I’ve read in the fantasy genre in years, and they are the key to understanding and appreciating the rest of the book. It’s a great cold open that, while light on action, deftly and economically introduces the two most important characters in the story and makes them interesting and likable without resorting to any hackneyed or offensive tropes.

The world-building in Sunset Mantle is similarly superb, although there was a stretch between the opening scene and the end of the first third of the book where I wasn’t entirely sure I understood what was going on. This might have been intentional, to build suspense or something, but I found it just confusing, and I would have preferred a more straightforward explanation for how some of the political structures of this world are organized. All the same, when I finally got my bearings, I was impressed by the depth of detail Reiss has packed into such a short book. I’ve read 800-page novels with less world-building than Reiss packs into just over one hundred pages, and this world could easily support a much bigger story than the one told here.

Perhaps the greatest strength of Sunset Mantle is that it’s just plain well-written (aside from the above-mentioned early confusion about the political situation). It’s tightly plotted, generally easy to follow, contains an excellent battle at its climax, and has a satisfying ending that feels natural and earned. It’s a small and personal story that still manages to feel epic, and it has enough darkness and high stakes to be compelling but stops well enough short of being grimdark that the word “fun” can still be reasonably used to describe one’s Sunset Mantle reading experience.