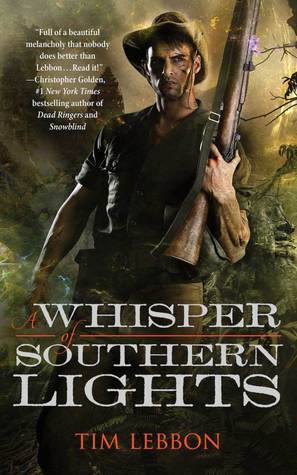 A Whisper of Southern Lights is the second novella I’ve read by Tim Lebbon, and it’s probably the last. I didn’t care much for Pieces of Hate a couple of months ago, or that book’s bonus novelette “Deadman’s Hand,” but I thought I would check this one out nonetheless. Generally Tor.com’s novellas are of good quality, and I thought that perhaps I just needed to give Lebbon’s Assassin Series a second try. Unfortunately, I liked this entry of the series even less than the previous installment.

The basic plot of this series is that this guy, Gabriel, is an ordinary man whose wife and children were murdered by a demon, Temple, after which Gabriel is made immortal and set to hunt Temple across time and continents. Over hundreds of years, the two immortal enemies meet and fight several times, but neither comes out ahead, and there doesn’t seem to be any actual purpose to their struggle. Indeed, when Gabriel and Temple do brush up against regular mortals, it tends to be fatal one way or another.

In A Whisper of Southern Lights, Gabriel is hunting for Temple in the chaos of the Second World War. He finds him in Singapore, where both of them are working to discover some knowledge possessed by a soldier who is being kept by the Japanese as a prisoner of war. However, for all that this sounds as if there would be some specificity to the tale, everything about this book is vague and generic. Even the racial slurs and the venom with which the soldier character thinks about the Japanese are entirely boring because it’s so obviously exactly the sort of thing I feel ought to be expected from this series as it moves into this setting. Gabriel continues to be a completely non-descript character, and Temple is still a caricature of evil. The man with the snake in his eye is as mysterious as ever, and the mythology of Gabriel, Temple, and their eternal struggle is still murky and ill-defined.

Worst of all, though, is that there’s very little reason to care about any of the characters at all. Even the soldier who is a temporary point of view character isn’t very likeable. He’s a random sort of fellow, not highly educated or a deep thinker, and without any particular virtue to make us root for his continued survival except that he is human, while Temple is not and even Gabriel is something else by now. It does seem unfair that some random guy would get caught up in their conflict, but with no real sense of what the conflict is even about and little enough to like about any of the characters, it’s hard to get invested in the events of the novella.

It seems as the Tim Lebbon wants to convey something deep and profound about the nature of war or of good and evil or humanity or something, but it’s hard to convey much of anything if you can’t string together a coherent story and make readers care about it. Your mileage may vary, but I’m getting off this ride before I waste any more of my time on waiting for it to come to some kind of point.

This review is based upon a copy received from the publisher through NetGalley.