The big news this week, obviously, is that SF Bluestocking is now a TWO TIME Hugo Finalist in the Best Fanzine category. The novelty of typing those words has still not worn off yet, though from now on I’ll probably keep it to myself. Thanks so, so much to everyone who nominated me; you are all The Best, and I love you.

After a shaky start to this year, what with life things happening and so on, I’m finally starting to feel like I’m being somewhat productive. I’ve gotten together an ebook version of my 2017 Let’s Read! Gormenghast posts, so watch for that this week, with new Gormenghast content to come, if not this week as well, then next. I’m also putting the finishing touches on my Spring Reading List as well as a look at my favorite reads from the first three months of 2018. This week is my final week of 5-sh in the morning start times at my day job, so I’m not making any set-in-stone promises about content, but after this my schedule will be much more reasonable and conducive to sleeping and writing and having some work/life balance, so while I don’t think we’ll see a return to my days of covering three or four television shows (plus books and the occasional movie) each week, I am hopeful that I’ll be back to some kind of regular blogging schedule. I’m even tentatively planning to cover The Expanse and Into the Badlands when they start back up in the coming weeks; I think I can handle one Wednesday show and one Sunday show, even if my posts end up being later than I’d prefer.

My favorite thing this week has to be this absolutely perfect tweet:

My second favorite thing this week is that one of my favorite books of 2017, Tansy Rayner Roberts’ Girl Reporter, won TWO Aurealis Awards and a Ditmar Award.

And here at SF Bluestocking, I’ve got a guest post from R.J. Theodore where we’re also giving away a copy of the book.

The Nerdist has an interesting guide to the film references and influences of The Last Jedi.

Good news: Matt Wallace is writing an epic fantasy trilogy! The bad news is that we won’t get the first book until Spring 2020.

S.B. Divya’s novella, Runtime, has been optioned for film and television. Yes, please.

You owe it to yourself to listen to Christopher Walken reading “The Raven.” 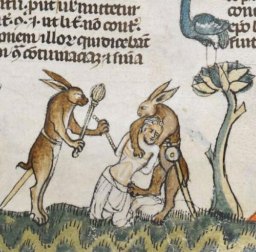 The Fandomentals continue their indepth analysis of Game of Thrones season seven with a look at events in King’s Landing: Part 1 (Recap) | Part 2 (Analysis).

There are violent rabbits in the margins of some medieval manuscripts, and you can click this link to find out why.

“The Male Glance” is a must-read essay.