Well, this has been another week in the life. While I haven’t posted here, I did actually have a productive three days in a row off work (potentially the last such lucky even for a while to come) during which I have actually been writing some stuff and reorganizing my schedule and trying out a new reward/incentive program for myself in order to encourage productivity so that I can get back to writing and posting more soon.

While this new system of doing things hasn’t paid off in any big way just yet, I’m already feeling encouraged. If nothing else, my mood has immediately improved, and I’ve been steadily checking things off my to-do lists, which I’m now doing daily and limiting to just a handful of good, reasonably accomplishable tasks. I’m hoping that this is going to be the long term motivational time-management and accountability tool I’ve been so desperately in need of.

My first big project under the new system is actually the resurrection of an old project. Last year, I began a detailed read-along of Mervyn Peake’s Gormenghast books, but I only made it about halfway through Titus Groan before getting derailed by life stuff and a nasty bout of depression, but it’s actually the 2017 work that I’m most proud of and I think it’s worth returning to and finishing. Plus, I figure it will be good for me to work for a while on something that’s really not time-sensitive. The other most-rewarding work I do is television recaps and reviews, but I foresee it being a challenge to keep up with those while working full time. 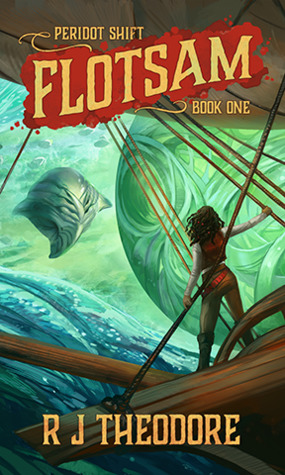 That said, new seasons of both The Expanse and Into the Badlands are starting in April, so we’ll see how things go. In the meantime, however, GORMENGHAST. If you haven’t read my previous Gormenghast posts, I should have a convenient (and free) ebook of them out by the end of this week, and I’m hoping to have new posts starting next week.

Finally, be sure to check back here at SF Bluestocking tomorrow, where there will be a guest post by R.J. Theodore, author of the steampunk first contact novel Flotsam (out Tuesday from Parvus Press) as well as a giveaway of a copy of the book.

The finalists for this year’s Kitschies were announced.

Heroine’s Journey, the third book in Sarah Kuhn’s excellent superheroine series, has a cover, and it’s fab, but the somewhat bigger news is that there are going to be more books in the series: three more, to be precise, plus a novella.

L.D. Lewis revealed the cover for her upcoming short story, A Ruin of Shadows, set in the same world as her much-praised “Chesirah” (in the first issue of FIYAH Literary Magazine).

Margot Robbie is going to be producing a female-led Shakespearean drama series.

Last week, I shared a link to an Ada Palmer piece on Treating the Divine in Science Fiction, only to realize after posting it that I ought to have shared the other posts in that series as well because they are all interesting and worthwhile reads. Here they are:

And here’s a trailer for season three of Into the Badlands, which already looks fantastic: