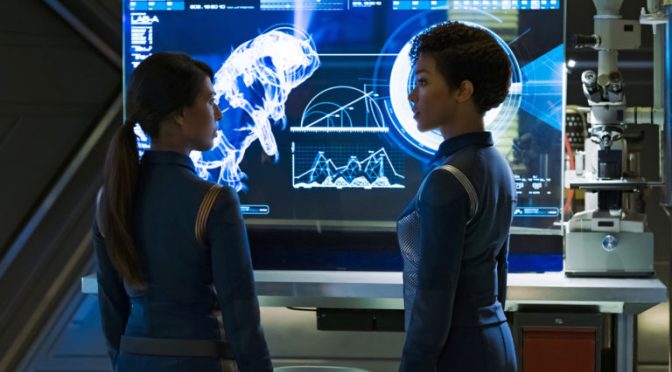 After a strong two-part premiere and a decent transitional episode last week, “The Butcher’s Knife Cares Not for the Lamb’s Cry” is a bit of a disappointment. After cramming a ton of set-up and plot into its first three episodes, what the show needs now is to establish a new normal and give the characters a reprieve from the constant barrage of Events! Happening! so the audience can get to know these people we’re supposed to care about. This is a needle that was successfully threaded in “The Vulcan Hello” and “Battle at the Binary Stars,” where we were given a nice prologue and several flashbacks to establish Burnham’s character and her friendship with Captain Georgiou, and this gave weight to the events at the end of the second episode, setting up Burnham for a redemption arc over the rest of the series. Last week’s episode contrived to get Burnham onto the Discovery and introduced a new cast of characters, so the next logical step would be to show us more of how these characters interact with each other, what makes them tick, or even just how Burnham settles in to the normal rhythm of life on the ship. Instead, this episode features another crisis, but it struggles throughout to convey why any of these events should matter to the viewer.

One of the things that worried me most about this show was when I read, months ago, about the ways in which it was inspired and influenced by Game of Thrones. While the most optimistic interpretations of statements from the Star Trek: Discovery show runners to this effect could point to a more general aspiration to craft the show more in the fashion of HBO’s prestige programming, I was pretty certain from the favorably framed allusions to Thrones’ penchant for killing major characters that whatever lessons Discovery was taking from Game of Thrones were wrong ones. I was disappointed when Georgiou was killed off so early in the season, but it made sense if the show was going to be about Burnham and her redemption arc. T’kuvma’s death didn’t even feel like a main character death; it had already become clear that Voq was the main point of view character in the Klingons’ storyline. These deaths made sense in context and within the larger structure of the show, even if they weren’t entirely welcome. The optics of Georgiou’s death were especially bad considering how much the show leaned on marketing the mentorship relationship between Georgiou and Burnham in the lead-up to the series, but still. It made sense, from a storytelling standpoint.

Last week, there was a classic redshirt death on board the Glenn when Burnham, Lieutenant Stamets, Cadet Tilly and Commander Landry went to investigate what had cause the other ship to stop communications. It was a little darker than one might expect from Star Trek, but not terribly so, and the redshirt trope is a trope for a reason. It was fine. Meaningless, but fine. If nothing else, it was in keeping with the overall tone of the episode and the series so far. This week, however, it’s Commander Landry’s turn to shuffle off her mortal coil, and it’s the definition of gratuitous.

Burnham’s first official assignment on the Discovery isn’t with Stamets as expected. Instead, she’s taken down to Lorca’s little mad science lab where the creature from the Glenn is being kept and told to find a way to find out how it was so good at fighting and to “weaponize” the beast. To keep Burnham on task, Commander Landry is assigned to oversee the project, but she quickly loses patience with the lack of immediate results. Burnham’s initial examination of the creature suggests that it’s an herbivore, something akin to a tardigrade, that was only acting in self-defense, but Landry is impatient to find some aspect of it to exploit. To that end and against Burnham’s protests, she opens the cell and attacks the creature only to die horribly when it responds in kind. Lorca uses Landry’s death to exhort Burnham to hurry up and find some way to use the creature—so that Landry’s death won’t be “in vain”—but the truth is that the whole thing happens so quickly and Landry has been so poorly developed (and with only antagonistic character traits in this episode) that it’s impossible to care very much about her other than simply on the very basic level of not wanting her to die because she seemed like an important character.

There’s certainly no reason for Landry’s death to affect Burnham, and it doesn’t; Burnham continues to investigate the creature, dubbed “Ripper,” in her own way and finds out that its usefulness is not as a weapon but as a tool for using Stamets’ spores for travel. Ripper is how the scientists on the Glenn were planning to navigate using the spore drive, and Stamets is able to use the creature to get the Discovery to a crucial Federation outpost that is under attack by Klingons. The Discovery saves the day, but Burnham notices something disturbing: the device used to harness Ripper’s navigational powers seems to be hurting it. However, that’s an ethical dilemma for another episode because this one isn’t about to deal with anything so interesting or Trek-y.

In the end, it’s hard to see the point of Landry’s death here, and the pointlessness of her death makes the existence of the character at all highly questionable. If Landry was intended to be a foil for Burnham, as it seems she was, the perfunctory way in which she was disposed of kind of defeats the purpose. We didn’t get to know her well enough to feel much of anything about her on a personal level. In fact, I had to check IMDb for her name. Landry is never a threat to Burnham’s new position on the ship, and she never truly challenges or tests Burnham’s beliefs or values, only reinforces them. If the point of Landry’s death was to reinforce the value of Burnham’s methods to others on the ship, it doesn’t seem to have done that; Lorca, at least, is unaffected by the death, and no other characters seem to know or care about it since Landry isn’t mentioned again once her corpse is packed away. That Landry is the second woman of color to be violently killed in just four episodes only makes things worse. This show traded heavily on its diversity in marketing, but the systematic killing off of non-white characters is at odds with the picture they’ve tried to put forward of a diverse and inclusive series. It’s disappointing, to say the least.

On a more general note, the show is suffering quite a bit from its overall surfeit of plot. There’s still a lot going on, and all of it is supposed to feel urgent, which makes none of it feel very urgent. The worst part is that there’s no time being spent on giving us any real sense of who any of these characters are or how they exist together. Potentially interesting relationships are suggested or teased, such as the antagonism between Landry and Burnham or Burnham’s complicated situation with Saru or the budding friendship between Burnham and Tilly. Even Stamets’ sense of awe and wonder when he sees the tardigrade monster with the spores has the potential to be an interesting glimpse into the inner workings of the character. But over and over again, revealing moments are cut off before they can reveal much of anything and character development is rushed past or ignored altogether in favor of showing us a thing happening. The problem is that we need character development and relationships in order to care about the constant crises the crew is finding themselves in.

There’s a reason why so many episodes of other Treks featured the crew during their leisure time. There’s nothing like a malfunctioning holodeck or a trip to a resort planet to reveal something new about the characters and force them to work together to solve a problem. So far, that sense of unity and cohesiveness of purpose is decidedly missing from Discovery.

3 thoughts on “Star Trek: Discovery – A long, poetic episode title is no substitute for real depth”