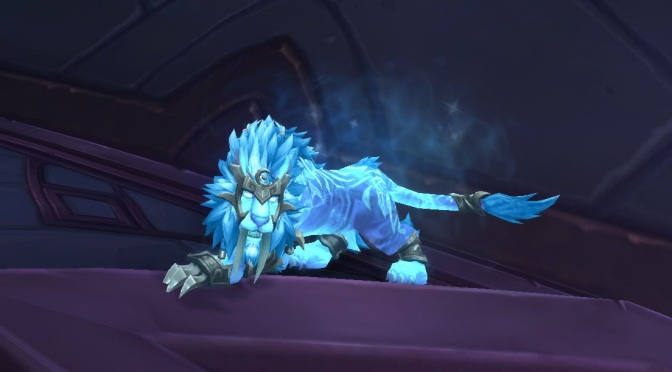 So, the good news is that I think I’ve turned a bit of a corner with this depression thing this week. The bad news is that I spent most of the week prostrated by an absolutely horrible cold, and I’m still not 100% better. That said, I’ve been heavily doped up on cold medicine for several days, and it’s helping. Today, I’d say I was running at about 60% normal energy, lingering sinus headache and all, which is still a good bit better than I have been in general the last couple of months. My hope is that this upswing in energy holds out as I continue to recover from this cold; ideally it will be a sustainable trend going forward that will allow me to get caught up on things and accomplish more of my future goals here at SF Bluestocking.

Also a cool thing: I finally got ghost cat form in WoW, which I didn’t know would leave a trail of sparkles when I run around. I am delighted with it.

It’s the beginning of the month, which means Tor.com has their lists up of the new books coming out from major publishers in September:

If you only have time for one long read this week, make it Ta-Nehisi Coates’ new piece at The Atlantic: “The First White President.”

You may have heard that N.K. Jemisin’s Broken Earth trilogy is in development for television at TNT. I chatted a little about it with Renay and KJ at Lady Business.

Malka Older’s Null States comes out on September 19. It’s amazing, and you should definitely pre-order it, but if you aren’t sold yet, you can listen to her interview at Skiffy and Fanty.

Max Gladstone’s newest Craft novel, The Ruin of Angels, was out this past Tuesday. He wrote about his Big Idea at Whatever and was interviewed at The Illustrated Page.

One of my most-anticipated reads this year is the US paperback edition of Iraq+100, which hits shelves on Tuesday. At the Tor/Forge blog, two of the collection’s contributors talked about science fiction in Arabic literature.

The Wertzone’s Cities of Fantasy series continued with a post on Midgar from Final Fantasy.

At Nerds of a Feather, Charles Payseur kicked off a new series on mapping the world of SFF short fiction.

There’s an interesting piece at Pornokitsch about what happens when creators make big changes in their fictional worlds.

P.Z. Myers takes a look at Jon Del Arroz’s complaints about how hard it is to be a man in SFF. (lol)

The Book Smugglers are Kickstarting a Level Up for their site and for their next year’s worth of publishing projects.