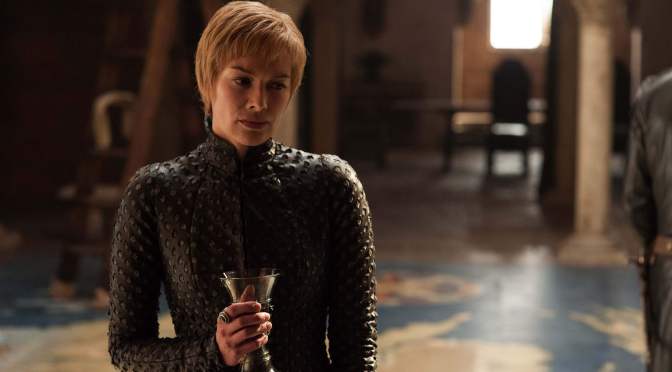 It’s that time of year again, where I try to guess, in broad strokes at least, what might happen on the new season of Game of Thrones. In the past, I have only had very mixed success at this, and last season was a shitshow that defied all expectations, but I’m back. Again. Still. Always. Because I have a weird, fierce love for this stupid, bad show. Also, two bottles of cheap Moscato for tonight.

This season, I haven’t been following Game of Thrones news the way I have in the past, though I have watched the trailers and looked at some of the promo posters and so on. However, I haven’t bothered with the endless parade of cast interviews and spoiler-free speculation and so on as it’s just gotten boring at this point. HBO likes to keep the show heavily under wraps in order to maximize our “surprise” at the show’s senseless violence and nonsensical storytelling, and that’s fine. It just means I’m pretty much basing my predictions on what I remember from season six, what little footage I’ve seen in the trailers for season seven, and six years’ worth of knowledge of the respect with which David Benioff and D.B. Weiss treat their source material and the audience.

Here’s what I think we might see this season:

Sansa Stark
We left Sansa at the end of season six watching her illegitimate half-brother/cousin Jon Snow accede to the titles and honors that she is both more legally entitled to and better qualified for, but there were some ominously foreshadowing shots of her seeming discontent with this situation. I fully expect this season to find Sansa segueing into the role of antagonist to Jon. With trailers and promo images indicating that Jon Snow will be heading past the Wall again, I think we’ll see Sansa left in charge of Winterfell in his absence. My concern is that this will end up with her having nothing of particular interest to do for the majority of the season, with her own antagonist dead and the Lannisters in King’s Landing likely to be busy with more immediate existential threats.

Jon Snow
It’s already been mentioned somewhere or other that Jon Snow will be heading to Dragonstone to meet Daenerys, and there are images of Jon beyond the Wall as well, so I predict that Jon is going to be doing some teleporting. There’s no way that, with just seven episodes in the season, the show is going to even try to convey the months-long journeys all this stuff will necessitate, and they’ve shown in the past that they care very little about maintaining anything like a coherent timeline.

Bran Stark
In trailers, it looks like Bran and Meera make it to the Wall and the Night’s Watch. I suspect that Bran’s new magic powers are going to be of use in defeating the zombie hordes of the North, but I don’t think we’ll see that actually accomplished this year. Instead, I think we’ll see a late-season reunion between Bran and Jon as Jon heads North to fight the zombies and finds his brother already there.

Arya Stark
Arya was last seen at the Twins, checking Walder Frey’s name off her infamous list, and I think this season will see her trying to make some more progress on those goals. It’s likely that she doesn’t know yet that any of her other siblings are alive in the North, so it seems logical that she would head south to King’s Landing. With the recent news that Gendry is back this season, and knowing how small the show likes to keep its world, I could see her reuniting with him somehow when she gets there.

Littlefinger
He could stay at Winterfell with Sansa as either a new antagonist for her or as Sansa’s co-conspirator against Jon Snow, either of which would be consistent with where the show left things last season. Alternatively, he could return to King’s Landing to hedge his bets with Cersei. He could even teleport to Dorne and/or Dragonstone, you know, as one does, and get up to some plotting there as well.

Brienne and Podrick
Something tells me that Brienne is going to head south again this season, perhaps for a reunion of some kind with Jaime Lannister. They’re also on my shortlist of characters I don’t expect to live out the season.

Davos Seaworth
Davos is still going to be on Team Jon, but he’s going to die beyond the Wall.

Melisandre
Banished from the North, Melisandre will either teleport to Dragonstone immediately or be completely absent until a late episode, when she’ll show up just in time to provide a magical solution to a problem.

The Hound
Promo material places the Hound in the North with Beric Dondarrion and the Brotherhood Without Banners. We won’t be getting Cleganebowl this year, if ever. Most of the Brotherhood will die, and this might include the Hound.

Cersei Lannister
True to her straw feminist form, Cersei will be day drinking and making terrible decisions. With almost every other character in King’s Landing dead, she’ll finally think about what’s going on in the rest of the kingdom, and it’s going to shock her. She is going to lose her shit when she finds out about Daenerys, but she’ll be even more concerned when she learns that Tyrion is still alive.

Jaime Lannister
Jaime is going to feel conflicted about Cersei, but not so conflicted he won’t still bang her. I predict/hope that this is the season we get to see Nikolaj Coster-Waldau go full frontal nude.

Bronn
Bronn will “hilariously” say some gross shit about women. I could see him getting to kill a Sand Snake or two this year.

The Greyjoys
Last time we saw them, Yara and Theon had joined up with Daenerys, but I don’t think this is going to turn out well for them. I think we’ll find out early in the season that Euron Greyjoy is throwing his support behind Cersei, and I think by midseason he’ll have caught up with his errant niece and nephew for a final showdown. If I was a betting woman, I’d put money on them all killing each other in a strategically silly naval battle of some kind because it would look cool. Yara’s queerness is going to be played for laughs at least once.

Sam and Gilly and Baby Sam
Gilly will still be waiting in that vestibule where Sam left her. Baby Sam is going to be like five years old. Sam is going to hang around the Citadel for the whole season, presumably learning something that we won’t actually find out about until season eight.

Olenna, Ellaria and the Sand Snakes
They’re going to join Daenerys, obviously. I don’t think we’ll see much, if anything, of Dorne this season, however. Instead, the Dorne crew will meet Daenerys at Dragonstone, and I think they’ll be significant in whatever battles with the Lannisters we get to see this season. However, I also think they’re likely to die in those battles as the show is surely looking to further cull its cast and storylines by the end of the season in preparation for the final few episodes next year.

Varys
Varys had teleported from Dorne straight onto Daenerys’s ship at the end of season six, so he should be with her when she makes it to Dragonstone. There’s no obvious role for him in any storyline at this point, so I think he’ll be more of a background advisor for Dany for most of the season. He could potentially come into conflict with Tyrion if they disagree over how Daenerys’s invasion of the Seven Kingdoms should be carried out, which would inject some drama into the situation, but I think it’s more likely that he’ll be around just enough for the show to include a joke or two about him being a eunuch.

Missandei and Grey Worm
There’s about a second of footage in one of the trailers for the season that looks like Missandei and Grey Worm getting ready to do it. So I guess that’s happening. I hope they run away together and live happily ever after, but I think it’s more likely that one or both of them will die tragically in service to someone else’s (either Daenerys’ or Tyrion’s) storyline.

Tyrion Lannister
Tyrion will mansplain everything to everyone. And he’s still going to be a fan favorite and critical darling, completely unearned.

Daenerys
We know for sure that Daenerys will make it to Dragonstone, and that will probably take up most of the first episode. I think the majority of whatever fighting she’s going to do in season seven will be in the last couple episodes and that most of her time will be spent holding court at Dragonstone and looking pensively off the battlements. I don’t think she’ll get a romance plot this year, but there’s going to be a bananas amount of new Daenerys/Jon fanfic after they meet.

Tits
We will see some.

Dragons
We won’t see as many as we’d like, but they’re going to be gorgeous.