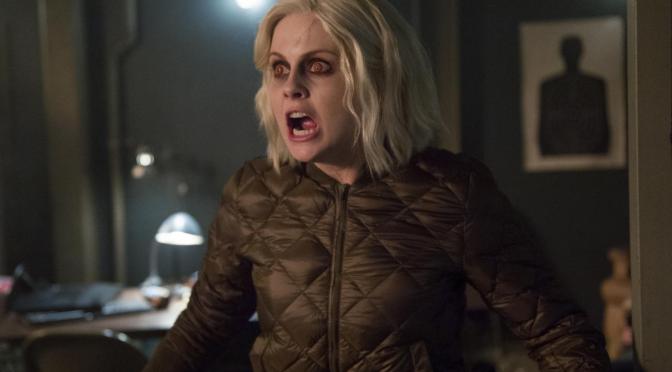 After expanding the story and cast by quite a bit in the last few weeks, “Conspiracy Weary” sees that trend reversing in preparation for the season’s two-part finale. Not all of it works, at least not entirely and not all in this episode, but it seems almost certain that some of the show’s more questionable storytelling decisions—like everything to do with Shawna—are going to turn out to be important in the next couple of weeks. Personally, I’m still not entirely sold on the necessity of these story threads, but we’ll see, starting next week, if the payoff is going to be worth the sometimes tiresome buildup.

We start at the shooting range, where shit gets very real very fast once Liv and Blaine show up. Ravi is hurt (only a little, fortunately) and Rachel flees into the night about the time that a group of Fillmore Graves soldiers shows up. Liv and Blaine take down one Bo Johns while two of the other zombie truthers are shot by the Fillmore Graves crew when they try to engage in a shootout instead of surrendering. Meanwhile, Harley Johns manages to give everyone the slip. It’s a taut, exciting action sequence, overall, and a great way to open the episode, fully delivering on the promise of last week’s cliffhanger. The zombie truther body count is even slightly surprising, since the show tends to avoid having its protagonists straight up murder people, even when they are kind of asking for it. The highlight of these early scenes, however, isn’t the action. Instead, it’s Blaine, Liv and Don. E. companionably sharing the brain of Bo Johns.

Once again, the show eschews the case of the week format in favor of advancing its bigger storylines, and Liv on conspiracy theorist brain is smartly done, with some of the funniest brain-eating-antics-related moments of the season. Liv and Peyton working to unravel the actual conspiracy surrounding Weckler’s murder and the connection to zombies is a great opportunity for their friendship to get some much-appreciated screen time, and some real strides are made in that investigation as Peyton gets the memory card Weckler was killed over and deduces that Weckler’s daughter, Tatum, is a zombie. Unfortunately, none of this is discovered before Baracus wins the mayoral election.

Liv also works with Blaine and Don E. to try and figure out where the Johns brothers’ secret property is. The guns recovered from Harley’s truck at the start of the episode turn out to be the same weapons that were used to kill Wally and Anna, which has Clive very invested in finding Harley Johns. When they finally track Harley down, however, Liv has a last-minute vision (right as Clive shoots Harey) that proves that Harley didn’t kill Wally and Anna. Fortunately/unfortunately, Harley isn’t dead; he’s a zombie, a revelation that will likely be dealt with early in next week’s episode. It seems obvious, especially in hindsight, that the Johns brothers weren’t going to turn out to be Wally’s killers, and by the end of “Conspiracy Weary” it seems likely that their deaths are tied in some unknown (and not obvious) fashion to the broader zombies vs. humans plot, the Weckler case, Baracus, and Fillmore Graves.

Bafflingly, we get some more of the Major and Shawna thing that started last week. She seems nice, and she encourages Major to start going out again, even convincing him to go dancing with her, but a short bit of sleuthing on Liv’s part (possibly influenced by the paranoia caused by Liv eating conspiracy theorist brains, but possibly just jealousy, though Liv denies this) turns up that Shawna has been sharing photos and videos of herself with Major since the beginning of their relationship. Here’s the thing, though. Why is Major so shocked and upset by this? He knew that she was taking pictures. He posed for them. He knew that she was active on social media, and he was aware of her Tumblr. It’s normal for people to post photos of themselves on social media, and none of what Shawna shared was particularly embarrassing. Sure, she should have been clearer in explicitly asking Major’s permission to share his image, especially considering his history as the Chaos Killer, and it makes sense that he would be upset about that, but at the same time, what did he think she was doing with all these pictures?

The show frames Shawna’s social media use as weird and suggests that she’s somehow trying to exploit Major, even though it’s not clear what she could gain here other than some notoriety (and then only if she was publicizing Major’s history). Really, though, the stuff Shawna posted is pretty run-of-the-mill honeymoon phase relationship pictures, and while she wasn’t explicit with Major about what she was doing, she also wasn’t hiding it; Liv was able to literally just google Shawna to find her totally public Tumblr. The episode takes pains to portray Shawna as “crazy,” but nothing she does actually is crazy. Even when Major unceremoniously dumps her—she very reasonably apologized and offered to take down the photos immediately when he confronted her about it—Shawna is upset but not unhinged in anyway. We’re meant to think that the shirts being sold at the end of the episode with Major’s photos on them are Shawna’s doing, but it, frankly, seems out of character for her, and it seems at least somewhat likely that this is a coincidence and that Shawna is going to turn out to have some other importance to the story. We must hope so, anyway. Otherwise, this whole Shawna subplot—introducing her just for the sex fort gag and to give Major a “crazy ex-girlfriend”—feels like a huge waste of time.

Finally, it’s not just Major who’s having girl trouble this week. Ravi’s friend and seemingly potential new love interest, Rachel, turns out to be a journalist, and she manages to get Ravi to tell her everything about zombies, which she promptly turns into a fear-mongering frontpage piece in a local newspaper. The episode ends with this, which, after the revelations of Baracus’s election win and Harley Johns being a zombie, leaves things very well set up for an exciting two-parter starting next week.