2016 was not a great year for me, and this was reflected nowhere more strongly than in my failure to finish my Let’s Read! coverage of Dune. It turns out that a summer full of travel and an autumn and winter full of one personal and financial crisis after another, combined with a book that I just didn’t care for that much isn’t a winning recipe for productivity. I got derailed early in last year’s project, and never quite managed to get back on track, so by the time the end of the year rolled around I decided to just call it quits and start planning my next project.

I knew early on that it was going to be Mervyn Peake’s Gormenghast Trilogy. I’d watched the BBC miniseries based on the books back in 2000, partly because I had a huge crush on Jonathan Rhys Meyers at the time and partly because I was deep into epic fantasy at the time and Peter Jackson’s The Fellowship of the Ring was still a year away. I remember that Gormenghast miniseries being dark and weird, suffused with gloom and a pervasive sense of irony that borders on visual sarcasm; I loved it, even when I didn’t “get” it because I was a teenager, and teenagers rarely get anything that’s worth really getting. In any case, gotten or not, Gormenghast has stuck with me all these years, so when I was brainstorming classic SFF works to read and blog in 2017 it was at the top of my list. After spending a couple of years reading some classics of science fiction (Dune, Childhood’s End, and others), it felt natural to go with fantasy this time around.

I actually tried to read Gormenghast back in the early aughts, but the enormous annotated version of the trilogy I bought back then was impossible to enjoy—too-small print, too-thin pages, too heavy to hold comfortably and too large to fit in any purse I owned—so it went the way of my old copy of Ulysses, which I also never got more than a couple dozen pages into. This time around, I knew I needed to look for some more manageable copies of the books if I was going to spend some months reading and writing about them. 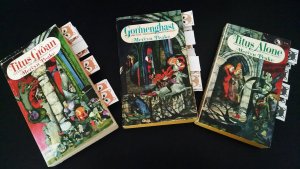 In the end, I settled on the Ballantine mass markets first printed in the late 1960s (though mine are later printings ranging from 1974 to 1977—Titus Groan, Gormenghast and Titus Alone, if you’d like to copy my exact reading experience. These editions have some gorgeously strange cover art Bob Pepper, whose work you might recognize from numerous other Ballantine covers from the 60s and 70s (including works by Asimov, Ellison, Moorcock, Dick and others). They also include the author’s original illustrations inside the books, a reasonable print size, and the pleasant weight of paper and nice glued bindings that characterize older mass markets. These things, if you take care of them, will last practically forever. Plus, old books smell amazing (if you’re into that sort of thing, and I am).

That said, all three books in the trilogy are conveniently broken up into chapters, which is how I’ve split them up into bite-sized sections—fifteen sections around 34 pages each in the first two books and ten sections around 28 pages or so each in the third one, which is a good deal shorter than the first two. I’ll be covering three sections per week starting on Monday, June 5. I’m also planning on, perhaps after the first book, perhaps at the end of the project, rewatching the 2000 mini-series to see how it holds up after all these years and examine how it works as an adaptation of the books.

The first three posts will cover:

After this, I will include further section information as part of my weekly State of the Blog post as well as at the end of the last post in the series each week. Additionally, each post will be tagged “Let’s Read! Gormenghast” and there will be a link straight to the project on the navigation bar at the top of the blog.

Readers, I am so excited about this project. While the US might be going to hell in a handbasket, I have no expectation of any barriers on my end to staying on task and finishing this project as planned, and having started the reading, I can already tell I’m going to love these books. It’s going to be a fun summer here at SF Bluestocking.