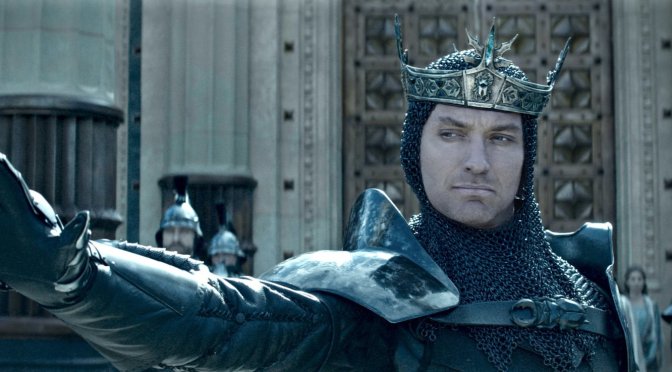 As a longtime lover of all things Arthurian for whom Lock, Stock and Two Smoking Barrels used to be a favorite movie, there was no way that I wasn’t going to go see this glorious mess at the first opportunity. If you’re like me, and the trailer for King Arthur: Legend of the Sword filled you with unironically joyful anticipation for this film, you will probably love the finished product, which is basically the trailer, but two hours long and on an enormous screen in a dark room. It’s all giant magic war elephants, fast-talking heist-planning, aggressively ugly action scenes, and hilariously confused imagery. I don’t think I stopped smiling from the first frame to the last, though I also lost count of the number of times I gleefully whispered, “What the fuck?” to myself. I adore this movie.

To the degree that King Arthur deserves serious analysis, it’s not as bad as you might expect. Like all of Guy Ritchie’s oeuvre that I’ve seen (which admittedly isn’t all, as I’m by no means a great fan of his), this movie is heavily focused on exploring the filmmaker’s seemingly complicated feelings about class and masculinity. What’s interesting about King Arthur, however, as opposed to Ritchie’s early work, is the presence of women and the way that the film’s masculine identities are constructed around the characters’ interactions with women. Whereas movies like Snatch and Lock, Stock didn’t feature any women at all, being entirely concerned with men and their homosocial interactions as a microcosm within which to explore broader (if only slightly) social issues, women figure prominently in King Arthur and in a variety of roles.

It’s not that the women of King Arthur are particularly interesting on their own—indeed, only the Mage and Maggie get any appreciable speaking time—the way they exist in the narrative and what they mean to the male characters is kind of fascinating.

Arthur’s mother could almost be considered a classic case of fridging, but the truth is that the deaths of Arthur’s parents occur at the same time in a scene that, visually, recalls the murder of Bruce Wayne’s parents several iterations of the Batman origin story as much as anything else. And make no mistake about it, this King Arthur is a super hero, which is an obvious and natural modern interpretation of the source material that ought to be accepted in order to best understand and enjoy this version of the story. While it’s primarily Arthur’s father, Uther, whose death Arthur must come to terms with to learn how to control the power of Excalibur, the trauma of his mother’s death is revisited numerous times throughout the movie as well, and she’s not forgotten or ignored even if she isn’t especially important.

While King Arthur has commonly been interpreted as a Christ figure, our earliest significant image of this Arthur is his being pulled out of the river like Moses when he’s found floating on the Thames by some prostitutes, who then raise the boy in their brothel in Londinium. These women (with a single, sadly fridged exception, Lucy) remain unnamed, and while the adult Arthur seems to respect and care for them—even working as a sort of bouncer for the brothel and taking actions to keep the women safe and avenge wrongs against them—the montage of Arthur’s childhood suggests that he was largely left to run wild, growing up on the streets with a couple of similar-age male friends and being taught how to fight by some of the adult men in their neighborhood community. It’s a kind of bizarre case of trying to have one’s cake and eat it, too; we’re meant to understand these women as important to Arthur, to understand Arthur as a man who likes and cares about women (and, to be fair, Arthur in the movie is unfailingly polite, gentle and respectful of the women he interacts with), but we’re also meant to understand Arthur as having practically raised himself. He’s a fantasy of a very literally self-made man, pulling himself up by his bootstraps through hard work, cleverness and a charm I would normally describe as “rakish” if it wasn’t so weirdly sexless (not that he’s lacking sex appeal, however).

Many critics have pointed out that the mythology of the movie, just in general, has little to do with classic Arthuriana, and one of the more interesting departures from the source material is to eschew Merlin almost entirely. He’s mentioned, almost as if the writers wanted to make sure the audience knew that they had read some King Arthur stuff, but Arthur’s magical mentor here is instead a woman who works for Merlin. The Mage is never given a proper name, and this interestingly works well to prevent the audience from projecting expectations on her. I spent the whole movie thinking she would eventually be revealed as Morgana or Nimue or maybe even Guinevere, but she never was, and it’s kind of amazing. Though the Mage doesn’t get much of a character arc of her own (the film is pretty strictly from Arthur’s point of view), the decision to avoid naming her as any of the classic Arthurian women lets us interpret her without any of the centuries of baggage those names carry, allowing the Mage to exist as a wholly original character. Surprisingly, she never becomes a love interest for Arthur—is not, in fact, sexualized at all—and while she is at one point captured by Vortigern she’s also never portrayed as a damsel in distress. Instead, Arthur is able to simply negotiate for her release in exchange for himself, and she’s returned unharmed and ready to help him in his final battle against Vortigern. We never actually see her trapped or suffering or powerless on screen, and though she doesn’t save herself from this situation, it’s a minor beat in the larger story and her capture and release is never given enough emotional weight to conform to the usual damsel in distress pattern. All in all, it’s a neat way of averting an all-too-common (and frankly boring) sexist trope.

Maggie is a woman working in Vortigern’s household, and while it’s not entirely clear what her job is—Cook? Maid? Concubine? Vortigern sarcastically calls her a representative of the people, but then he also has her escorting him when he travels, so who knows?—her importance in the story is as a spy for the resistance against Vortigern. Maggie is competent, brave and loyal to the cause. Oddly, though, she never actually interacts directly with Arthur. Instead, she reports on her spying to Bedivere, and her most memorable interactions are with Vortigern when he realizes (somehow) that she’s a spy. What’s interesting about Maggie is that she doesn’t die tragically once her duplicity is found out, but lives right on to the end of the movie, where it’s visually hinted at that she is paired off with Bedivere.

If Arthur is meant to be understood as a man who values and respects women, even as he avoids romantic entanglements, Vortigern is the opposite. One of Vortigern’s first actions in the movie is to sacrifice his wife to gain magic powers so he can defeat his brother, Uther. One of his last actions is to sacrifice his daughter to the same evil-seeming creature (which, incidentally, is three women and a bunch of slimy tentacles) in exchange for yet more power in his futile quest to possess Excalibur. This is by no means a feminist film, and it may be the most generous interpretation of it, but it’s easy to read Vortigern’s willingness to destroy women—even those he claims to love—as a key to his downfall and Arthur’s respect for women as a key to his success.

Ultimately, though, this is a movie about masculinity. Arthur’s coming of age and acceding the throne is tied directly to his ability to control Excalibur, a sword (this sword, even) being a classic phallic symbol. Vortigern’s power is represented in an enormous tower, even more aggressively phallic than Arthur’s sword—especially when we consider that Arthur treats Excalibur casually (e.g. letting it drag on the ground, allowing it to be passed around and carried by his various friends, easily lending it to Bedivere so that Bedivere can knight Arthur’s friends) and with some ambivalence of feeling (there’s a whole sequence where he tries to throw the sword away and the Lady of the Lake has to convince him to take it back), while Vortigern’s tower is jealously guarded and vigorously defended. It feels as if this wants to be a rejection of toxic masculinity—represented by Vortigern and his armies—in favor of a more sociable, constructive masculinity as represented by Arthur, with much of the meaning conveyed through their respective interactions with women, but it’s honestly a mixed bag. There’s a lot to analyze, but for a movie that’s not actually about women at all, there are so many female characters that it’s genuinely hard to make heads or tails of what the filmmakers are trying to say about them.

One thought on “Movie Review – King Arthur: Legend of the Sword”