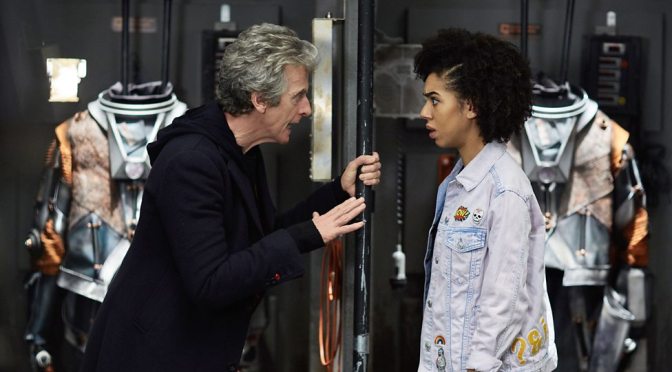 “Oxygen” is another solid Doctor Who adventure, for all that it retreads some of the same thematic ground that was already covered in “Smile” and “Thin Ice” just a couple weeks ago, specifically regarding the dangers of robots (of a sort) executing their programming in a more extremely literal fashion than is strictly healthy for humans and the dangers of unfettered capitalism, which is also not particularly healthy for humans. It’s an ambitious enough episode in that it takes a strong stand and conveys a coherent progressive message, but it suffers from being a bit overstuffed and at times feels distracted as it tries to touch on more topics than can reasonably be done justice in just forty-five minutes. It’s an episode that, while overall well-done, could have benefited from some tighter editing and spending a little more time on the central thesis instead of getting sidetracked with ideas and asides that never quite fit within the main narrative.

The episode begins with two events. First, a nice-seeming couple is working on a space station when they are attacked by what appear to be some kind of space zombies. Meanwhile, the Doctor is pining for space and feeling cooped up being stuck on Earth to guard whatever (whoever, really) is in the secret vault that he and Nardole have secreted under the university. While Nardole does his best to keep the Doctor on Earth, Bill is game for a space jaunt, and soon enough the three of them are answering a distress beacon on the now seemingly abandoned space station. The bare bones of the rest of the story is that there are no space zombies (a disappointment, to be honest); just a bunch of company-owned space suits designed to sell oxygen to workers on a mining station in an especially evil take on the idea of a company town; the station itself is kept empty of air, and all air needed by the workers is metered out through the suits. At some point, either someone at the company or the AI technology in the suits themselves realized that it was cheaper for the company to not have human workers at all, and the suits have been systematically killing their occupants as a cost-cutting measure.

For an episode of Doctor Who, it’s surprisingly dark, and perhaps the most interesting thing about this story is that there are some real consequences for the characters in the end. Bill gets another glimpse of a future that isn’t, at least in some ways, as optimistic as she might prefer. More importantly, she is not only in real danger; she has a serious brush with death that must highlight just how dangerous her travels with the Doctor can be. The deaths of most of the workers on the space station are permanent, however, and the Doctor is only able to rescue two out of forty of them, which gives “Oxygen” a staggeringly high body count, even compared to similar episodes. That the news of the event leads to the eventual downfall of capitalism as humanity’s economic system of choice is cold comfort, especially when the Doctor adds to that bit of information that humans still find new and different mistakes to make after capitalism. Surely this will be true if humanity survives long enough to spread to the stars, but still. This is a family show.

What’s most surprising and compelling about this episode, however, is that it’s the Doctor himself who faces perhaps the most significant and transformative change of the episode. When Bill’s space suit malfunctions right as they’re about to go into the vacuum of space, the Doctor gives her his own helmet to save her life. It works, but though the Doctor’s tolerances to space are greater than any human’s, he’s still injured, left blinded until they can return to the Tardis, where he expects to be healed (or at least says so). In the end, however, we learn that the Doctor is still blind, which may well be a permanent state of affairs, at least until his next regeneration. Going forward, it puts him at a decided disadvantage for future adventures—offering an unprecedented chance for the show to explore disability in a thoughtful manner—and gives him a secret that he’s keeping from Bill, who has no idea that the treatment the Doctor underwent on the Tardis didn’t work. The Doctor is a character who’s defined by periodic major changes, but there’s never been a time in the rebooted show where the Doctor experienced this type of potentially profound change. It will be interesting to see how the show handles it in the weeks to come.