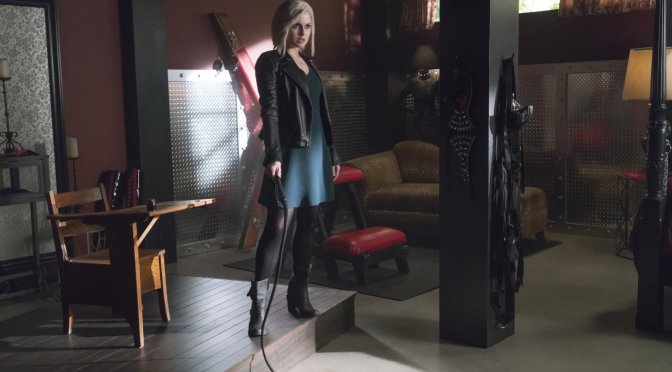 “Spanking the Zombie” is basically half fun murder mystery and half heartrending tragedy, but somehow it works. I do have a couple quibbles about it, but it’s overall a very good episode that avoids the biggest potential pitfalls in its concept, advances the overarching plot of the show in a big way and has a strong chance of making the viewer cry like a baby at the end.

Liv almost immediately has a vision, which turns out to be the first of many intense visions she experiences this week, an unintended effect of the memory serum—which is interesting, since it supposedly had no effect on Blaine at all. I have the feeling that chances of Blaine faking his amnesia have risen considerably with this development, though we don’t see Blaine (or Peyton) at all this week. The other interesting thing that’s done with Liv’s visions this week is that, instead of filming all the visions so the audience gets to see what Liv sees, we see much more of Liv’s visions from the point of view of other characters. It’s a neat way of showing a little more of the mechanics of this mythology, and it feels significant, though it’s not clear what the significance of this new perspective might be just yet.

The murder mystery itself is nicely twisty and provides an excuse to bring back two of my favorite minor characters: erstwhile weatherman Johnny Frost (Daran Norris) and sleazy defense attorney Brandt Stone (Ken Marino), who are even more fun together than they have been apart. Obviously neither man is the murderer, but they are instrumental in figuring out who is. While they’re at it, they bring a level of humor and snark that, along with Liv’s vamping around dominatrix-style, makes this one of the funniest cases of the week in the show’s history. The only problem with this case is the wrap-up. Once the actual murderer is captured, he basically confesses immediately—with an odd line to the effect that it doesn’t even matter how or why he murdered Roxanne—and that’s the last we see of the guy.

It’s a strange anticlimax to an otherwise entertaining story, and the crack about the murderer’s motives and the details of the crime not mattering might be meant in a meta, self-deprecating way by the show’s writers, but it mostly just feels weirdly abrupt and dismissive of the whole previous half hour of storytelling. In a way, it’s true that the show’s murder mysteries are often episode filler and comic relief between more dramatic moments and more overarching plots, but it’s not true that these stories don’t matter or that no one cares about the resolution of them, even in an episode that’s about to end with a gut punch like this one does.

This episode starts and ends with Major. First, we see him participating in his first actual mercenary mission with the Fillmore Graves crew, during which he ends up being stabbed a whole bunch of times. When he returns to Seattle, he collapses and his friend Justin brings him to the morgue, where Ravi and Liv realize that it’s time for Major to take the cure, memory loss or not. First, though, they have to keep him alive until his stab wounds heal up enough that they won’t immediately kill him when he turns human, so they stabilize him and take him home. After Ravi goes to his own bed, Liv and Major kind of rekindle their relationship and say some tragically bittersweet goodbyes. It’s beautiful and sad, and I have so much love for how messy Liv and Major’s relationship is. They never manage to be quite at the same place at the same time, but there’s something wonderful about their quiet, consistent love for each other. Next week, I guess we’ll find out if Major really is going to lose his memories and what that’s going to mean for their friend group.