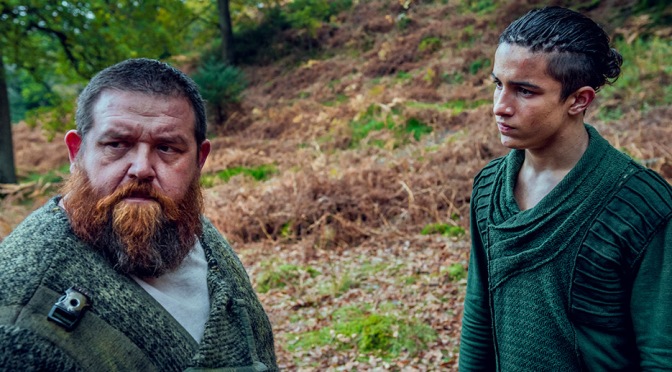 Season two of Into the Badlands has, overall, been a vast improvement on the first season, which was too short to really develop its ideas and suffered, furthermore, from poor pacing. The expanded episode order of season two has really given the writers more room to play and the whole story has been allowed to breathe in a way that just, generally, improves the viewing experience. However, too much of a good thing is possible, and “Black Heart, White Mountain” slows things down to a frustrating degree, with most of the episode laser-focused on Sunny, which means that the far more interesting storyline—Quinn and the Widow’s attack on new Baroness Jade—doesn’t get nearly enough screen time to do it justice.

The pre-credits scene this week is the beginning of a lengthy dream sequence Sunny has while unconscious, broken up into parts that stretch across most of the episode. It turns out that in Sunny’s dream life, he lives with Veil and their son, Henry, on a small farm in the woods, but as the episode goes on Sunny finds himself haunted and tormented by ghosts from his past that destroy his dream life while picking at all Sunny’s worst fears and insecurities. An aura of tragedy has surrounded Sunny all season, and it becomes palpable in this episode; Sunny is terrified that he will never be able to truly leave his past as a Clipper behind him and that it will poison everything he tries to do forever; he worries that his past will get people he loves killed; and he’s scared that his child might follow in his footsteps. It’s all pretty straightforward redemption arc material.

What’s not entirely clear is how the viewer is meant to feel about Sunny’s anxieties. On the one hand, in-universe, his concerns seem to be well-founded. The Badlands are an ugly place, and Sunny has made a long list of enemies. Without eliminating or making peace with his enemies and changing the whole rotten system, it seems likely that Sunny will never fully escape his past and that his son may make similar decisions to cope with living in such a deeply messed up world. On the other hand, it also feels as if we may be meant to see Sunny as different, even as uniquely incorruptible, persevering as he is to try and build a better life for himself and his family and to do the right thing as much as he’s able. Perhaps we’re meant to think Sunny’s anxieties are exaggerated or neurotic, and they’re being set up as potential conflict between Sunny and the more optimistic characters in his life, namely M.K. and Veil, both of whom have a faith in Sunny that Sunny doesn’t have in himself. Sunny seems like the kind of guy who would “selflessly” leave his family behind to save them from himself. I just hope that tired old trope isn’t the direction things are heading.

While Sunny is working through his inner demons, Bajie and M.K. have to figure out a way to save him. While their bonding and the revelations about both characters are well-done, like Sunny’s dream sequence they just take up far too much space in the episode. Things get slightly more exciting when they finally arrive at the monastery, where they try to sneak in and out while the monks are having dinner, only to be discovered (predictably) by the Master. The ensuing fight is underwhelming, and in the end M.K. and Bajie manage to find a cure for Sunny’s condition and make their getaway without too much trouble. That the Master is left, presumably, alive is simply par for the course with this show; all of Sunny and Bajie’s journey so far has basically been about pissing off every person of note in the world on their circuitous route back to the Badlands. I only wish the Master felt like more of a credible threat. This is the first episode in which the Master has been portrayed as explicitly villainous, and we still don’t know enough about her motives to be certain that M.K. and Bajie haven’t simply misunderstood what the Master is trying to do with the monastery and the way she trains those who share their “gift.” The ease with which she’s outwitted and defeated here doesn’t make her seem very dangerous.

The most interesting thing to me about this storyline, however, is Bajie’s story about his novice, Flea. When he first tells M.K. about her, Bajie lets M.K. believe that Flea died at the monastery, but we learn at the end that that’s not the case after all. Instead, Bajie freed Flea before he left, and he’s been searching for her ever since; the Badlands is the only place he hasn’t looked yet. Also, probably, the city that M.K.’s book and Sunny’s compass might lead them to. After killing off Ava so unceremoniously last week (and mostly forgetting about her this week), it was nice to have a missing woman who isn’t fridged, even if Bajie’s story about Flea has some holes in it and confuses his motivations. This is the first we’ve heard of Flea, and Bajie’s stated goal of finding her seems at odds with his previous reluctance about going to the Badlands at all. Generously interpreted (assuming we are to believe it at all, which is still questionable), this Flea story adds some depth and complexity to Bajie’s character, but it doesn’t feel organic or like a truly integrated part of his personality, and it’s rather a big change from what we’ve been shown about Bajie so far. That Bajie has stolen and kept Sunny’s compass further confuses things as it suggests that Bajie may just be out for himself after all. We’ll see.

The storyline that is shortchanged this week mostly concerns Jade, who is the first Baron targeted by Quinn and the Widow in the war of revenge against their former confederates. We first see Jade this week in the bath, but she quickly works out that something is wrong when her servants don’t respond to her calls, and she goes to see what’s going on. It turns out that her cogs are in revolt, her clippers are defecting, and Quinn and the Widow are in her house, capturing her by the time she’s finished getting dressed. There’s not much actual combat to be seen here, probably due to time constraints, which is too bad as I’m positively itching to see Jade get to actually fight; she certainly seems game for the challenge. Instead of a fight, we get a short conversation between Quinn and Jade where he accuses her of tearing apart his family and she stubbornly points out that he did that himself. Jade truly loved Ryder, and that’s something that Quinn doesn’t understand and isn’t willing to truly engage with. Jade is ready to die and tells Quinn so, but in the end, he decides to exile her instead.

This is either a sad ending for Jade or the start of a new and glorious redemption/revenge arc for her, and there’s some great potential here if the show decides to develop her character more. It’s far more interesting than anything Sunny, Bajie and M.K. did this week, in any case, and the storyline could have benefited from just a generally deeper treatment. Sarah Bolger as Jade nailed her scenes with Quinn, but it’s left unclear what she said that caused him to decide to spare her life, and we see almost nothing of note with the Widow and what went into her decision-making process here. The Widow doesn’t kill women; she just gives them to predatory men when it’s convenient to her, apparently. This is way beyond “problematic fave” territory at this point and well into “undeniably garbage, self-serving White Feminist” neighborhood. I’m curious how much longer Tilda is going to stick with her mother at this rate. She cannot be totally okay with this, right? Maybe if this storyline was given a bit more time to play out, we’d know.