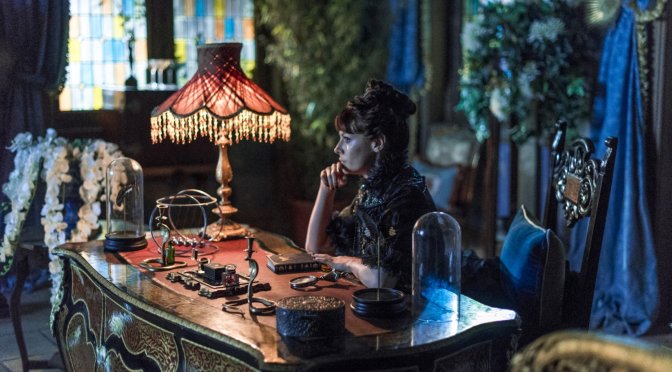 Into the Badlands has always been a show with sharp edges and dark corners, and “Leopard Stalks in Snow” takes things to perhaps the darkest place the show has ever been. We’re past the halfway point of the season now, and already we’re starting to see all the show’s disparate storylines begin to converge. This week showcases more than one significant reunion, a couple of big revelations and several potential major conflicts on the horizon. All in all, there’s a definite sense of an enormous storm brewing; it just remains to be seen if all this build-up is going to pay off in the end.

The pre-credits scene this week picks up right where last week’s episode ended. Lydia is reeling, disoriented and bloody after the explosion at the entrance to Quinn’s secret compound, and the men she led there are strewn about, some in actual pieces, as Quinn walks among them cutting the throats of the wounded. It might be the most gruesome scene of the show to date, to the point that it’s uncomfortable to watch. It’s saying something, really, that this isn’t the hardest to watch scene of the episode, to be honest, though Quinn’s quiet “Hello, Lydia” is chilling. Their reunion goes about as well as one might expect. Lydia is angry about Quinn killing Ryder; Quinn makes things all about himself; Lydia tries to stab her estranged husband; Quinn kisses her; and things get weird. I’m curious to find out if Lydia’s response here is real or if it’s calculatedly feigned. Either way, gross, and we don’t see Lydia again this week.

Sunny and Bajie get rid of Portia and Amelia early and unceremoniously, which is disappointing. I didn’t expect for those two to become a permanent fixture in the show, but the way they’re so quickly disposed of here—I don’t recall even seeing Amelia onscreen, and we only see Portia for a moment—borders on disrespectful and practically reduces them to furniture in Sunny and Bajie’s story. While Sunny does have a short talk with the man they leave Portia and Amelia with, that conversation is almost entirely about reassuring Sunny that he’s an okay guy and absolving him of responsibility for Portia’s injury. Sure, Into the Badlands has no dearth of interesting, complex and empowered female characters with stories of their own, but it wouldn’t have taken that much time to give Portia and Amelia the dignity of a proper ending to their story that wasn’t all about Sunny and his feelings.

Elsewhere, Ava catches up with M.K. and they continue traveling together, hoping to escape the Abbots, who are already hunting them using a device that can track M.K.’s gift. Before the Abbots catch up to the young fugitives, however, they’re sidetracked when the device picks up something else and leads them right to Bajie, who evades them by hiding underwater. Sunny follows the Abbots alone when Bajie refuses to go with him, and he catches up to them about the same time they catch up with M.K. and Ava, who are camping in an abandoned shopping mall Christmas display. This leads to the big showpiece fight scene of the episode, which is fine. We get to see Daniel Wu square off again Cung Le, which is cool; we learn that Bajie’s was once an Abbot as well, which is interesting; but the whole thing is marred by the tragically predictable fridging of Ava, who dies in the battle. And this after a genuinely compelling scene between M.K. and Ava where they Ava talks about her feelings of loss of identity now that they’d left the temple. This comes into play during Ava’s actual death scene, when she fears that if the Master lies, there may be no rebirth for her after death, just nothingness. Unfortunately for Ava, Sunny steals her thunder by having some kind of heart attack and collapsing, drawing M.K.’s attention away from her final moments so that it’s not just a fridging—it’s a poorly executed one in that the full impact of Ava’s death is considerably blunted.

I’m starting to think that, ultimately, the biggest and most interesting conflict of the season may end up being between the Widow and Tilda. Tilda’s big scene this week is with new butterfly Odessa, who is planning to leave after hearing that the Widow is planning to ally with Quinn to take down the other Barons. In response to Odessa’s concerns, Tilda shares her own story of how she met the Widow and why she calls the Widow “mother.” I’m not sold on the necessity of yet another story involving sexual abuse of a child, even if it does end with the Widow murdering her rapist husband and apologizing to Tilda for not doing it sooner, but it does set up a fascinating potential for future conflict. Tilda has deeply personal reasons for standing by the Widow, and Odessa brings an important outside perspective to challenge Tilda’s loyalty to her baron, but there’s an even bigger test of Tilda’s loyalty likely coming soon.

Last week, Veil finally escaped from Quinn, and this week she and Henry are found by one of the Widow’s butterflies and brought to the Widow’s estate where she meets Tilda again. The Widow offers Veil shelter and safety, theoretically anyway, in exchange for going back to work on trying to translate a book about the mysterious city that everyone is so obsessed with. However, when Quinn learns that the Widow is sheltering Veil, he demands Veil be returned to him as a condition of the alliance between himself and the Widow. Perhaps unsurprisingly, but nonetheless infuriatingly, the Widow, in the end, decides to turn Veil over to Quinn. It’s a horrendous betrayal of Veil, and the decision of a white woman to sell out a black woman to a white man for, essentially, personal gain is much worse than I think is even intended by the show. The Widow may think that she has a just cause and a greater good that she’s serving, but this action is also a betrayal of any principle she thinks she might have, and it’s solid proof that Odessa is right not to trust her. Veil’s expression of abject horror at the prospect of being sent back to Quinn is more than enough to paint the Widow as a villain here even if the Widow hadn’t just come up with some bullshit reason for why her conscience is clear. This isn’t the sort of thing she’ll be able to keep from her Regent, though, and Tilda isn’t going to like it.