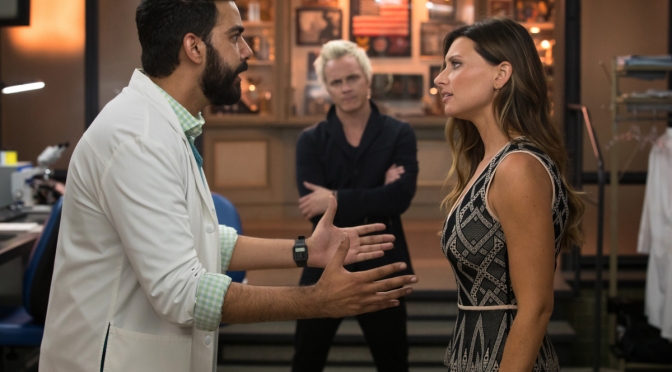 After the big shake-up in the season two finale and dealing with the fallout from those events in the first couple episodes of season three, iZombie is already getting back to a more routine formula, and that’s not a bad thing. The case of the week concerns a murdered yoga instructor, and it’s a below average mystery at best. There are a couple of good Liv and Clive moments during their murder investigation, and it’s interesting to see Clive getting more comfortable with Liv’s zombie abilities, but the main events of the episode all concern secondary characters.

Major is working his way through mercenary training at Fillmore Graves, where it turns out that having been a personal trainer and generally fit still puts him way behind a group of guys who were apparently already mercenaries before they even became zombies. Major also doesn’t like the brain tubes that they eat at Fillmore Graves: “It’s like someone ate old brains, then yogurt, and then mommy birded them into a tube.” Which sounds about right, but Major has bigger problems. As we’ve already been reminded last week, the non-working version of the zombie cure that Major took will likely kill him if nothing else is done, and this week Major starts exhibiting some symptoms, mostly in the form of a persistent cough that Ravi diagnoses as a mild case of pneumonia. It’s a more tangible reminder, this time, that Major’s time is potentially very limited, and this episode sees him taking more steps to try and find Natalie, a quest that has a new urgency with Major being unable to deny anymore that he may be dying. Also of interest this week are Major’s several long, sad looks at Liv. He’s obviously still in love with her, but it remains to be see whether he is going to say anything to her about it or if he’s just going to keep suffering in silence.

Blaine’s dad, Angus DeBeers, is back and in a big way. First, Angus gets his lawyer to come with him to take back Blaine’s inheritance, which gives us yet another scene that proves Blaine isn’t faking his amnesia. Angus then spends the rest of the episode working with Don E. to open a new zombie club. It’s not entirely clear what exactly they’re planning to do here and how they’re somehow going to turn it into a revenge against Blaine, but they’ve got the place, it’s zombies only, and Don E. is about to go on a scratching spree. It’ll be interesting to see how these plans work out, especially for Angus, who doesn’t seem able to inspire much loyalty in his new lackey, judging by the wistful look we see Don E. giving Blaine at the end of the episode. And let me just say, Don E. staring wistfully at Blaine through a rain-covered window might be my favorite single image of the season so far.

The big thing I want to talk about this week, however, is Ravi and Peyton. I haven’t been thrilled with how Ravi has been behaving the last couple of weeks, and I’ve been concerned that his sad man story might be dragged out for a long time. I shouldn’t have worried. This is the episode where Ravi torpedoes his relationship with Peyton and possibly their whole friend group.

After Liv stops putting up with his constant moaning about Peyton and tells him to go talk to Peyton about it, that’s exactly what Ravi does. Peyton is at first receptive to his apology, as she’s been confused and hurt about Ravi’s coldness towards her, but things go off the rails quickly, with Ravi seeming to low key blame Peyton for his intrusive thoughts and then framing his apology to her in such a way that it’s clear he’s expecting his apology to be reciprocated. It’s the worst sort of sexist bullshit, and Peyton is not having it. She doesn’t have anything to apologize for, she’s not responsible for Ravi’s intrusive thoughts, and she’s got her own shit to deal with. It’s not often that we get to see a woman on television deliver such a great shutdown of men’s garbage like this, and it’s even rarer to see it portrayed as entirely justified and correct. It’s not that Ravi is completely unsympathetic; it’s just that he is completely in the wrong here and being monstrously unfair to and manipulative of Peyton.

Things get worse later on when Ravi and Liv get Blaine to come to the morgue so they can try to convince him to test the memory restoration serum that Ravi has come up with. Blaine, very understandably, doesn’t really want to have his memories back. He doesn’t remember the evil things he did, and his amnesia offers him the chance for a fresh start. Ravi argues that Blaine owes them this, and Ravi goes on a bit of a rant that culminates with him confessing his love to Peyton. Blaine finally agrees to test the memory serum, but Peyton isn’t immediately responsive to Ravi’s declaration of love, so Ravi goes out and sleeps with his old boss, Katty. This is found out when Peyton shows up at Ravi’s place. They’re talking in the foyer, Ravi kisses Peyton, and then Katty drops a wine glass in the other room, at which point Peyton walks into the kitchen and sees the other woman wearing no pants. The whole situation is on the one hand almost laughably contrived but on the other hand not exactly out of character for Ravi at this point. Once again, Peyton is not putting up with Ravi’s shit, though, and she leaves, immediately, and goes to join Liv and Major to listen to Blaine singing.

I almost feel bad for Ravi, but only in the way that I would feel bad for anyone who repeatedly punched themselves in the crotch for no reason. He just makes all the worst possible decision with how he deals with his feelings for Peyton, and it’s hard to watch. It’s, honestly, something of a bold move for the show. Ravi is a fan favorite character, partly because he’s generally delightful, and this storyline forces the viewer to see him in a very different and extremely unflattering light. That said, I am so glad that it’s made so clear that he’s the bad guy here. Peyton hasn’t done anything wrong, and Ravi hasn’t done anything right with her for a while now. We’re seeing something of a darker side to Ravi this season, and while I’m glad this storyline is moving along quickly I also hope the show doesn’t let Ravi out the hole he’s dug for himself anytime soon. He’s not the worst, and he’s not irredeemable, but they definitely should take their time.