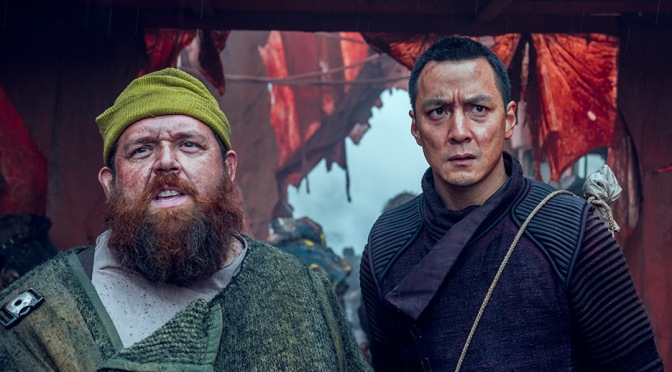 Sunny and Bajie are back this week, M.K. still doesn’t get much screen time, the Widow is reassessing her situation, a major character death is dealt with, and things are not going super well for Quinn. “Monkey Leaps Through Mist” is primarily an episode about regrouping after last week’s events, and, consequently, it feels relatively slower-paced, especially with only one fight scene. Still, there’s some good character work, a couple of surprises and the beginnings of what might be the show’s next major shake-up.

The pre-credits scene confirms Ryder’s death. I was pretty certain he was dead last week, but I was also pretty certain that Quinn was dead at the end of the show’s first season. Given this show’s tendency to the occasional soapy plotline, a fake-out wouldn’t have been terribly surprising. What is surprising, however, is the ease with which Jade takes up her husband’s title. Ryder’s regent, Merrick, administers Jade’s oath right over Ryder’s dead body, with no fuss at all. There is a slight tension to the moment, but only because viewers may be primed by years of pop culture consumption to expect a group of fighting men to reject the leadership of a woman. Personally, I appreciate the matter of fact subversion of that expectation, especially because it does seem so normal within the world of the show, or at least within this moment in that world.

The other thing that Jade accomplishes more easily than I would have expected this week is getting Lydia to work with her to avenge Ryder’s death. It makes sense that Lydia would want to kill Quinn for what he’s done—and even more sense when we learn that Lydia had always wanted more children but been unable to have them—but the arc leading Lydia to this feels unfinished. She hasn’t gotten much to do so far this season, and we’ve been shown that she isn’t exactly fitting in back with her father’s pacifist cult, but it still seems almost inexplicable that she would so quickly join with Jade, be given command of clippers (whether she knows where Quinn’s hideout is or not) and take up a sword to lead an attack. Fierce as Lydia is, there’s never been any inkling that she was a trained fighter and in fact we’ve only been shown that she’s quite capable of defending herself through sheer grit and has a willingness to kill when desperate. Which is something to build on, but this week’s developments are abrupt and somewhat disorienting. It’s easy enough to buy Jade’s elevation to Baron—she was always ambitious—but Lydia’s sudden shift from trying to make it work with her dad’s pacifists to leading the attack on Quinn is harder to justify as a natural character progression.

Sunny and Bajie arrive at a town that is controlled by a friendly acquaintance of Bajie’s, Nos, who trades in metal and sex slaves. They trade Nathaniel Moon’s sword for a way into the Badlands, but before they go they have to get through a night in Nos’s village. Bajie settles in well enough, enjoying the company of one of Nos’s Dolls, but Sunny is unsettled by it all, especially when he meets a little girl named Amelia and her mother Portia. Knowing that Amelia will soon be used as a Doll, Portia approaches Sunny to ask him to kill Nos, but he refuses. When Nos finds out about this, he cuts Portia’s face, and prepares to use Amelia sooner rather than later. This finally spurs Sunny into action, and he and Bajie manage to rescue Portia and Amelia before escaping in the vehicle Nos has provided to get them to the Badlands.

I liked this fight scene, but Sunny’s newfound set of rigidly (and stupidly) inflexible morals are going to get people killed. His proscription against killing for hire almost does get Portia killed this week, and he was willing to let a little girl be trafficked into sex slavery before killing an evil man. It doesn’t exactly speak well of where Sunny’s priorities are, and it’s not clear that he’s truly learned anything from this most recent experience. In the end, he still didn’t kill Nos, which leaves numerous other women and girls trapped in a terrible situation and sets up Nos to be a recurring adversary along with the Engineer and Nathaniel Moon, both of whom are still floating around somewhere and almost certainly wanting Sunny dead. This cycle is starting to get repetitive, but I’m encouraged by the fact that Sunny now knows that Quinn is alive and at least suspects that Veil may be with Quinn. It makes Sunny’s goal moving forward a little clearer. Now he just has to get there without trailing a bunch of pissed off murderous bastards behind him.

Elsewhere, Tilda is apologizing to her mother for disrupting the conclave. However, the Widow isn’t upset. She even praises Tilda’s instincts and encourages her to trust her gut feelings. The Widow is not happy with Waldo, though. Waldo advises that the Widow earn back the other barons’ good will by capturing or killing Quinn, but she’s having none of it. Instead, she says that she plans to ally with Quinn against the other barons, which seems like a completely terrible idea, but she basically tells Waldo that he needs to make it happen. I mean, honestly, this seems like the worst idea, and there’s not much attempt made to justify it in the text, either. It seems impulsive, which is in character for the Widow, but there’s no clear gain for her in allying with Quinn, who she doesn’t know well and who has turned into an unpredictable force of chaos. Granted, the Widow can’t have much of the information that the audience has about Quinn’s illness and deteriorating mental state, but that seems like even more reason for her to avoid him. Their opinions were never aligned before, so what on earth could she be thinking now?

Speaking of Quinn’s deteriorating mental state, he is not doing well following the murder of his son. He’s followed throughout the episode by visions of Ryder’s ghost, and ghost Ryder has lots to say, digging at every one of Quinn’s insecurities and fears until Quinn is having a full-on paranoid psychotic break and threatens to kill baby Henry until Veil is able to calm him down by reassuring him of her care and appreciation of him. It’s a week of close calls for Veil, who has already in this episode had to explain (and not very well) to Declan what happened to Edgar and why she’s hiding x-rays that still show Quinn having a tumor. All that tension leads, ultimately, to Veil’s newest escape attempt. When Lydia and her clippers show up, a booby trap goes off at the entrance to the underground compound, and Veil manages in the confusion to run out into the woods with Henry. It doesn’t take long for Quinn to notice she’s missing, though, and it remains to be seen how Veil’s latest gambit works out.

One thought on “Into the Badlands: “Monkey Leaps Through Mist” is a solid transitionary episode after last week’s big events”