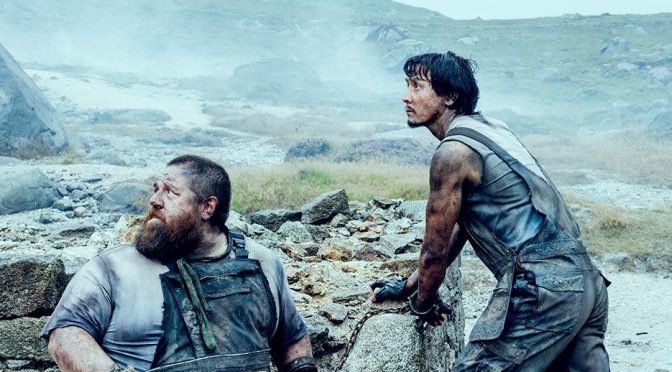 After last week’s excellent season premiere, “Force of Eagle’s Claw” slows things down a little and switches point of view less often for longer scenes and some quieter character work. Even the fight scenes this week were for the most part less flashy and even more utilitarian to the plot. It’s a good change of pace and provides an even fuller picture of the current state of affairs in the Badlands than we got last week. There’s a certain amount of unevenness, if only because Sunny and Bajie are so much more fun to watch than everything else, but it’s a solid episode, overall, that sets up some compelling options for the future of the show.

After being sold out to the Engineer last week, Sunny finds himself being prepped to fight to the death with Mouse for the privilege of being the Engineer’s new champion. He tries to refuse, stating that he doesn’t kill for others anymore, but he’s not being given an option. Instead, Sunny’s shackled to the treacherous Bajie and tossed into what passes for a fighting ring. Rather than staying and fighting for the Engineer’s entertainment, Sunny and Bajie flee up some stairs towards freedom, but they still have to fight their way out in a fight sequence that gets as bloody as I think this show has ever gotten when they escape through a huge fan and toss Mouse back into it, where the unfortunate man is practically vaporized into red spray all over the Engineer and his henchmen. As a fan of comic levels of gore, I appreciated this scene.

Sunny and Bajie finally escape the mines, but not without a vow from the Engineer that he’s not letting them go so easily. Nonetheless, the rest of their journey in this episode is largely uneventful. They hike through a land of rather lovely rolling green hills that Bajie calls the Outlying Territories, which is almost suspiciously devoid of any signs of other human life but provides a gorgeous backdrop to Sunny and Bajie’s bickering. Daniel Wu and Nick Frost have a great chemistry together, and their characters are near-perfect foils for each other. Watching Bajie’s seedy charm bounce off Sunny’s taciturnity is consistently entertaining with plenty of sharply-written dialogue and a couple of nice surprises. It turns out that Sunny isn’t completely humorless, and we get further confirmation that Bajie has some useful skills. They end the episode on the wrong side of an enormous, ancient wall that runs the whole border between the Badlands and the Outlying Territories, but I expect both their skills will come in handy in the weeks to come.

After leading her Butterflies to kill a group of rapist Clippers last week, Tilda is due for a stern talking to from Waldo, who is apparently working directly for and with the Widow now. Waldo advises Tilda that part of the key to being a good regent (and to just staying alive) is being able to bottle up one’s feelings and follow orders. Tilda insists, however, that killing those rapists was the right thing to do, and I agree. Waldo’s advice to Tilda in this scene comes off as somewhat mansplain-y, and I don’t love the way he compares her to the absent Sunny, especially when even Waldo admits that Sunny wasn’t immune to emotion, either. It’s also worth pointing out that Waldo is somewhat hypocritical here, since he’s apparently been subtly undermining the whole system for years, which seems like a much bigger act of rebellion than Tilda executing some rapists.

Later, we come upon Tilda and the Widow practice sparring, which Waldo is interrupting to have a sort of strategy meeting with the Widow. Ryder has called for a conclave of all the Barons, where he’s going to complain that the Widow’s taking back of her oil rigs is unlawful. It’s a way to avoid an all-out war, apparently, but it’s also baldly cowardly, which seems like a semi-ballsy move for a guy who has managed to get himself installed as the Baron of multiple territories. The Widow is ready for war, but Waldo advises caution and diplomacy. This conversation as well had the potential to come off as mansplaining on Waldo’s part, but I think it worked better than the previous talk between him and Tilda. The Widow is a mature woman, and Emily Beecham imbues her with a sort of ambitious, very physical energy that prevents her from ever seeming subservient. Whereas Tilda may look up to Waldo as a mentor, the Widow keeps him as an advisor and their interactions—even when they don’t entirely agree—have a strong sense of collaboration and equal footing.

Ex-Baroness Lydia ended last season by returning to her father’s religious commune, and we see her in this episode seeming to have settled back in nicely. At any rate, she’s officiating a marriage ceremony and looks as happy and content as we’ve ever seen her, though the rebuke she receives after thanking the community for accepting her back suggests that she isn’t quite as accepted as she thought. When a couple of Nomads arrive and disrupt the wedding, killing the groom and several more men before making to steal and rape the bride and other women, it’s Lydia who leaps into action to protect the group. This fight scene, brutal and harrowing as it is with the threats of rape, is probably my favorite of the season so far as it shows us a side of Lydia that we haven’t seen before and reveals just how much she’s been changed by her time away from her father and these people.

Unfortunately, Lydia’s reunion with her son Ryder later in the episode isn’t as successful a scene. It works well enough as a continuation of Lydia’s themes from earlier and to further highlight Lydia’s change in status since last season, but the revelation that Quinn was responsible for protecting Lydia’s father and his flock isn’t particularly surprising or interesting, and neither is the family drama between Ryder and his estranged mother. Judging from how much Ryder seemed to rely on Jade for leadership last week, it’s hard to disagree with Lydia’s assessment of her son’s abilities as a Baron, and if she was just planning to reiterate that hurtful truth I’m not sure what she hoped to gain by visiting her son at all. I feel like, ultimately, the real conflict here is still between Lydia and Jade, but we don’t see Jade in this episode at all, which is a shame. I can think of several ways that Jade’s presence, either to interact with Lydia or just to interact with Ryder about Lydia, could have improved this storyline.

At the temple, M.K. continues to train with the Master, who takes him to a room full of mirrors and tells him that there are many versions of himself living inside him and that it’s one of them that is blocking his progress. In order to move forward, M.K. must defeat this other self, which also turns out to mean that he must come to terms with a significant event in his past. It’s pretty straightforward, with some expected callbacks to Luke Skywalker’s similar journey in Star Wars, but things aren’t made so easy for M.K. While his showdown with Dark M.K. is the most visually striking fight scene of the episode, M.K. is ultimately unsuccessful in defeating his darker impulses and must be pulled out of the vision (or whatever it is) by the Master. I don’t expect this storyline to be narratively groundbreaking stuff, but it’s nice to see M.K. being allowed to face real obstacles in his path to enlightened heroism.

The final thread of this week’s story confirms that Quinn is, indeed, alive and not some kind of awful hallucination of Veil’s, and this is where things get weird. Apparently, after what looked like a fatal ass-kicking from Sunny, Quinn was found by Veil as she was leaving town. Instead of leaving him to die like she probably ought to have, she rescued him and doctored him up until he could turn right around and keep her a prisoner in his very creepy (kudos to the set designer and props department) underground lair. Quinn still has several dozen clippers who have remained loyal to him in his current exile, and he’s styled himself as something of a religious leader, blaming his previous failures and current problems on his lack of faith and failure to observe old rites. To avoid such failure in the future, Quinn has become newly dedicated to religion and is baptizing Veil’s baby, Henry, in blood. It’s strange and gross and melodramatic and Marton Csokas is really living it up as Quinn. I have no idea where this is going, but it’s fun as heck to watch.