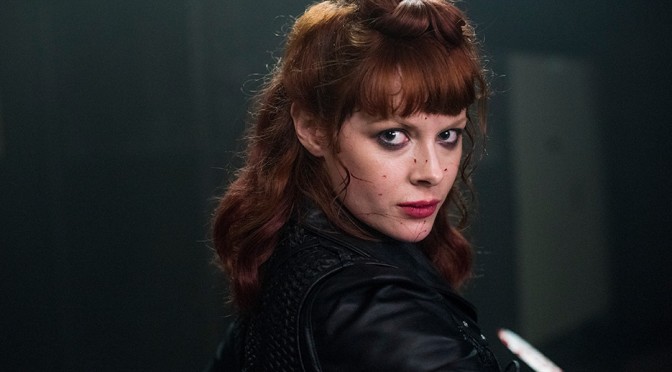 I loved Into the Badlands when the first six-episode season aired back in late 2015, and I was thrilled when confirmation of its second season finally came. It has a unique concept with a distinctive and striking visual style, a diverse cast, and excellent fight choreography, and it even has a decidedly progressive sensibility so I was genuinely confused and disappointed when it seemed that no one I knew was watching it. The good news is that season one of the show is now on Netflix, everyone is watching it (finally, belatedly), and season two has begun and is off to a great start.

“Tiger Pushes Mountain” picks up six months after the end of the first season’s finale, which had several cliffhanger-ish endings, and it serves both as a where-are-they-now episode for those of us who watched the first season and a sort of soft reboot of the series that is mostly accessible to new viewers (though I still highly recommend checking out the first season on Netflix). It’s an episode that shows exactly what kind of show this is, and it sets a tone for the new season that is already proving to be slightly darker, definitely faster paced, and a good deal bloodier than season one was.

Sunny (Daniel Wu) ended season one being betrayed by the River King, and season two opens with Sunny arriving in shackles at the Bordo Mines, which gives us our first action scene of the season before the opening credits even roll. The troll-like overseer of the mine (Stephen Walters, credited as “The Engineer” and bringing a delightful touch of madness to the role) orders the murder of one of the other new arrivals, and Sunny chooses this time to take a stand. He kills several of the Engineer’s henchmen and at least temporarily prevents the murder before being recaptured knocked unconscious.

Sunny wakes up to find himself chained to Bajie (Nick Frost), a disreputable sort of grifter character who immediately assesses Sunny as someone who “looks like trouble.” Nick Frost brings a garrulous energy and louche charm to the role of Bajie that makes him great fun to watch in scenes with Sunny, who has always been a quieter character and spends much of this episode silently trying to think his way out of his current predicament. It’s only about halfway through the episode when Sunny approaches Bajie for help, but Sunny makes a mistake when he lets on to Bajie that he’s planning to escape alone. Bajie’s betrayal of Sunny to the Engineer is expected, but Nick Frost is so likable in the role that I can’t help but hope these crazy kids work things out enough to go on a bigger adventure together.

At the end of season one, M.K. (Aramis Knight) was kidnapped by mystery monks who seemed to share his magical powers, and here we find him several months into his training at a secluded monastery. His mentor at the start is a young woman named Ava (Eve Connelly), but M.K. is anxious to meet the Master. There’s an interesting scene with M.K. and a Nomad boy that he’s sharing a room with in which we learn that the stigma M.K. has faced regarding his powers isn’t the norm everywhere. Among the Nomads, the other boy was treated almost like a god and granted special privileges, so he’s skeptical of the training the Master offers to/forces on them. It’s a smart way of recontextualizing M.K.’s role—he’s not unique, and his understanding of his own powers isn’t the only way of understanding them—and helping the viewer to understand the way in which magic fits into the world of Into the Badlands.

When M.K. finally meets the Master (Chipo Chung, who some will recognize from a couple of memorable turns on Doctor Who), we again get a different perspective on and deeper understanding of M.K.’s gift. M.K., however, just wants to finish his training as soon as possible so he can get back to the Badlands and his friends there. There’s not a ton of forward movement on this storyline this week, and the episode ends with M.K. still firmly stuck at the monastery, but the Master is going to personally take over his training from now on. I expect things are going to get interesting for M.K. next week.

Meanwhile, Ryder (Oliver Stark) and Jade (Sarah Bolger) have abandoned the plantation house and are ruling their three territories from Jacoby’s mansion. Unfortunately, this information is delivered in clumsy exposition in a scene right back at the supposedly abandoned plantation house, which is weirdly overgrown and dusty for just a few months’ absence, especially since all the furniture and stuff is covered and they supposedly left on purpose. Apparently, this is where Ryder hangs out when he’s feeling pensive or just needs a retreat from the responsibility of being the Baron of three territories, even though it seems pretty obvious in this episode that Jade is the one doing the heavy lifting of actually leading and managing things in their new situation. Still, this isn’t the worst way of working in some necessary exposition, and the scene is mercifully short as Ryder is shortly called away to deal with a problem at an oil refinery and Jade joins him.

It turns out that the Widow (Emily Beecham), after the late revelation of her revolutionary ideals last season, has spent the last several months building up her forces and planning to take back the territory she lost. This episode finds her making her first major move, and she and her daughter/Regent, Tilda (Ally Ioannides), meet Jade and Ryder at the refinery. When Tilda explodes a vehicle piled with oil barrels, the Widow chases Jade through the refinery killing every man in her way in a gloriously fun-to-watch fight sequence that culminates in an encounter between Jade and the Widow that I’m certain launched a thousand ships. Seriously. I’m not sure how to read Jade’s expressions as she watches the Widow as anything other than intrigued arousal.

It’s also a fight sequence that works interestingly to lead the viewer to contrast the Widow and Sunny. Both characters ended season one rather down on their luck—Sunny betrayed and captured, the Widow at least momentarily beaten and robbed of her territories and prestige—and their arcs towards regaining what they’ve lost and achieving their goals (which are broadly similar) are rife with parallels and points of obvious comparison. Daniel Wu has said that they wanted to make the action scenes more in service to character and story this season, and they’re successful so far. Though Sunny’s and the Widow’s respective sequences don’t appear exactly at opposite ends of the full episode, they still work to neatly and symmetrically bookend the what-are-they-up-to-now portion of the hour before the show moves on to actual moving-along-the-plot and introducing-the-rest-of-the-season’s-conflicts stuff.