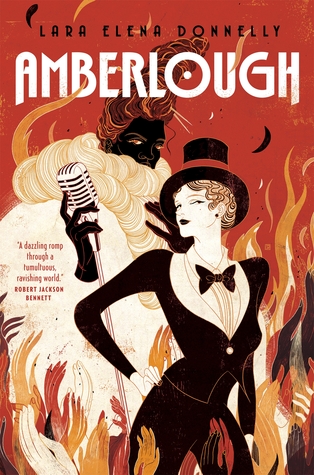 Amberlough is a brilliantly inventive and gorgeously accomplished first novel for Lara Elena Donnelly, who manages to both test the limits of the fantasy genre and craft a whip smart and timely political thriller at the same time. Comparisons to Cabaret and Le Carré are accurate enough (and certainly intriguing enough for marketing reasons), though I always think we do a disservice to fresh, original work by using such comparisons to shape reader expectations. Amberlough is a fine novel on its own merits, full of bold world building, great characters, big ideas and a thoughtfully bittersweet ending.

For a fantasy world, this one is remarkably devoid of magic. Amberlough City, where the majority of the novel’s action takes place, is the capital of one of several nation states arranged in a loose confederacy called Gedda. Technologically, culturally and aesthetically, things feel somewhere in the neighborhood of the real world’s 1920s to early 1940s—there are cars and telephones and electric lights and cabarets—which is highly appropriate for a story of the rise of a fascist political party. It’s an interesting decision to write this story as a fantasy novel, and I kept half-expecting there to be some magical or supernatural twist or deus ex machina, but none ever comes. The fantastical element here is only the secondary world itself, and Donnelly does a wonderful job of bringing it to life. It’s a setting that feels familiar without the opportunity of being dryly historical—indeed, the choice to build a secondary world setting frees Donnelly from any demands for historicity—and has a pleasantly lived-in quality that makes Amberlough feel plausible and compelling as any historical fiction would be.

Like the world in which they exist, Amberlough’s characters are also multi-dimensional, well-drawn and with a good level of complexity. The three main characters—Cyril, Aristide, and Cordelia—each have distinctive personalities, motivations and journeys, and the secondary and tertiary cast also has enough depth to not be completely overshadowed by the main characters. That said, Cyril is the king of terrible and stupidly self-and-otherwise-destructive decisions, and Aristide is slightly underutilized for most of the book, so it’s Cordelia who is the real stand-out character. Which is okay. Because I adore her. She’s exactly the sort of difficult woman that I love best to read about, and she undergoes a thorough transformation over the course of the book. Cyril is a self-deprecating fuck-up; Aristide is a charismatic survivor; but Cordelia has a political awakening, and it turns out that Stories About Women Having Powerful and Profound Political Awakenings is my favorite genre of 2017.

Perhaps the most surprising thing about Amberlough is how serious a book it is. It’s not a hopeless novel, but Donnelly doesn’t sugarcoat anything, either. The historical inspirations for the book are fairly obvious, and parallels to the Weimar Republic are easy to discern. It would be easy for this story to be simply a facile and thinly veiled parable about how fascism is bad, but Amberlough is much more than that. Cordelia’s character arc of political awakening is my favorite aspect of the book, probably because it’s, in a weird way, the part of the story that I found most hopeful and encouraging. Cordelia’s story makes me want to (and feel like I could) go punch a thousand Nazis in real life, but the Cyril and Aristide threads are important as well, with much to say about political and personal compromise. Cyril tries to walk a line that he thinks is far wider than it actually is between double agent and straight up collaborator, and it might destroy him and everyone he cares about. Aristide has to deal with his own changing status under the new Ospy regime and find a way to survive when things start to get really scary.

Some readers may not appreciate the ambiguous-at-best-and-quite-probably-devastating ending of Amberlough, but I loved it. Too many writers contort the denouement of their stories in order to please their readers or to just wrap things up tidily, but Donnelly chooses to eschew a happy ending here, opting instead for an impactful and haunting one. Still, I can’t help but wonder what it would have been like to read this book if Hillary Clinton were President. It’s true that antifascist narratives never really go out of style, but in light of our current terrifying political situation in the US, Amberlough has a timely relevance that I can’t imagine was completely intended. This may also be why some of the marketing for the novel seems to undersell it and indicate a much slighter story than it actually is, but either way it’s something of a failure to manage reader expectations. Amberlough isn’t a fun thriller-romance like the cover copy suggests; it’s a powerfully written look at how people exist in the birth of a fascist regime. The message isn’t one of hope; it’s a call for resistance.

One thought on “Book Review: Amberlough by Lara Elena Donnelly”