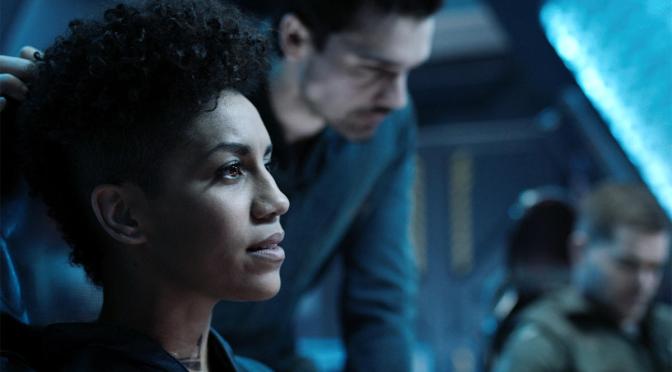 After all last week’s great setup, I rather expected “Godspeed” to be a more action-packed episode and to move at a faster clip through the remainder of the story from Leviathan Wakes. Instead, this episode focuses a lot more on some compelling emotional beats and then stops just short of a major climax that I was really looking forward to seeing. So, in a way, “Godspeed” was something of a letdown. At the same time, however, the episode flows nicely for the most part; there’s some necessary character development, especially for Holden; and the CGI team really brought their A-game in bringing the space action to life. This wasn’t the episode I wanted or expected it to be, but it’s not bad, and the preview for next week’s episode looks promising enough that I’m glad that this last bit of Leviathan Wakes material is being given more room to breathe.

Book and show spoilers below.

“Godspeed” opens with Avasarala and Cotyar investigating the derelict stealth ship that Fred Johnson directed them towards last week. They’re having the wreckage explored, and the place is just dripping with evidence—an expensive warship with one of the stolen drives from the Bush shipyards, full of dead crew all of whom are found to have last worked at Protogen, which ties this all clearly to Jules-Pierre Mao and to the destruction of Phoebe. It’s not long before Avasarala has put together a significant portion of the plot between Mao and Errinwright, and she soon has both men in a room together to straighten things out. After this conversation, Mao is spooked, but Errinwright is still in denial about what Avasarala knows, which leads Mao to terminate their association. Still, plots are afoot, and Avasarala doesn’t have the full picture just yet, even if she is much cleverer than Errinwright gives her credit for being.

Sadly, though, most of this still feels like buildup to future events. I love Chrisjen Avasarala. I could watch just ten straight hours a year of her being the smartest person in every room, and the costumes, hair and makeup for this character are always exquisite. But none of what happened this week felt urgent, and none of it resolved anything. This season began Avasarala’s story with a dramatic attempt on her life, which was good. It gave us some real action on Earth and raised the personal stakes for the character, which led to her discovery of Errinwright’s plotting against her. That was good, entertaining stuff. Now, it feels as if the show is trying to send Avasarala down the rabbit hole to see how deep things go, but without much support. Mao and Errinwright might be worthy opponents for our Chrisjen, but they haven’t gotten much screen time before now, and watching the unraveling of their plans isn’t the best way to make them feel threatening. Cotyar is inscrutable, and he doesn’t seem in danger of getting a big shot of character development any time soon. Even Avasarala herself seems somewhat flat and one note so far this season, in spite of Shohreh Aghdashloo’s formidable acting chops.

Having read Caliban’s War, I expect that this is simply because there’s not a whole lot for her to do until Bobbie Draper shows up in a couple more episodes. It’s just unfortunate that in the meantime, the politicking on Earth feels less and less consequential with each scene we see. Much of what Avasarala is uncovering now is stuff that took her halfway through Caliban’s War to figure out (and then only with Bobbie’s help), which makes my concern now that by the time Bobbie Draper gets to Earth and Chrisjen meets her, they won’t have much to do together. This might make sense if somehow the show is hoping to squeeze the rest of Caliban’s War into the back half of this season, but that would make for either a lot of rushing things or a lot of cut book material. With the show being so true to the books up to this point, that seems unlikely, which could suggest invented material for the show, as with the pre-Ganymede scenes for Bobbie and her unit, but that’s been a mixed success at best. I guess we’ll find out in a couple of weeks once Bobbie gets to Ganymede and the Eros stuff is behind us.

There was, incidentally, no sign of the Martians this week, as aside from the brief scenes of Avasarala, Mao and Errinwright the rest of the episode followed through on Miller’s suggestion to Fred Johnson last week that they use the Nauvoo to ram Eros and the protomolecule into the sun. There was some great character work in these segments, especially from Chad L. Coleman as Fred Johnson and Steven Strait as Holden, two characters who had to deal with making major decisions in this episode. There’s also a great deal of fantastic CGI space action, with the launch of the Nauvoo a particular highlight and the boarding of Eros another. From a technical standpoint, the show absolutely nailed the things it needed to nail this week. When it comes to maintaining a cohesive narrative and thematic arc, “Godspeed” is somewhat less successful.

Things start out well enough on the Tycho with a pre-credits introductory scene in which Miller and Fred Johnson bring Holden and Naomi in on their plan for the Nauvoo and Eros. Holden, self-righteous as ever, is still sore about Miller killing Dresden, but he quickly sees the necessity of dealing with Eros as soon as possible and agrees to help with relatively little fuss. The scene is good, but the sudden end of Holden’s antipathy towards Miller after this final short display of it is too abrupt and feels unearned. It’s only Naomi who is willing to talk to Miller before they go back to Eros, but later in the episode when Miller is in danger, Holden seems to have forgotten their disagreement entirely. Any kind of short interaction between Holden and Miller to resolve their argument would have made a difference here, and we surely could have given up a few seconds of CGI spaceship porn to make room for it.

The standout scenes of the episode showed the commandeering and launch of the Nauvoo, but here the sheer CGI gorgeousness of it almost overshadowed the rest of what was happening. The scenes of the Mormons being evacuated from the Nauvoo, which also serves as their temple, are heart wrenching, but again this is material that feels somewhat rushed over. Jeff Clarke is perfectly cast as Elder McCann and imbues the Mormon leader with a humane earnestness that makes him a surprisingly likable minor character, and he deserved a little more consideration than he got. On the other hand, the final scene of Fred Johnson ordering the launch is perfectly executed, and Chad L. Coleman makes the most of his own limited on screen time to effectively convey Fred’s conflicted feelings about what they’re doing.

When Holden and company reach Eros, they find a small ship docked with the station full of doctors on a humanitarian mission to help the people trapped inside. Deciding how to deal with this might be the hardest thing Holden has had to do to date, and it’s certainly Holden at his most compelling so far. When the doctors on the Marasmus mistake the Rocinante for Martian ship, Holden plays along, hoping to scare them away from Eros without violence, but before the Marasmus can make their escape it’s discovered that they have already been inside the station and in contact with the protomolecule. The captain of the Marasmus intends to broadcast their Eros findings to the rest of the solar system, which could only add to the chaos and misinformation that has been fueling many of the events that have taken place since Holden’s own ill-advised broadcast about the destruction of the Canterbury. Holden has been through a lot since then, and circumstances have continually forced him to compromise his ideals and adapt to unfamiliar situations, which has made him far more circumspect about spreading information. In the end, Holden is forced to destroy the Marasmus, a symbolic killing of his own old self that should have interesting repercussions for the character down the road.

The pacing of the episode is strange throughout the hour, and the ending feels both sudden and anticlimactic. It’s not that it’s particularly telegraphed earlier on or anything, but the news that it’s Eros that is changing course and heading towards Earth just isn’t at all surprising when it happens. The voices coming from the station all this time have been a clear hint that something there might be sentient, and it prevents the ending of “Godspeed” from functioning as a proper cliffhanger, especially since we already know that Naomi can remotely disable the detonator that Miller has his finger on. It’s pretty obvious where this is going, and I just wish it would hurry up and get there so it can move on to whatever comes next.