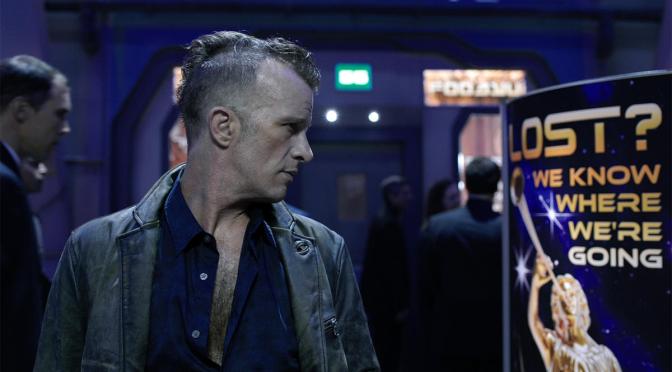 After last week’s action-packed season premiere, “Static” is a fairly quiet interlude that splits its time between character development moments—as various people deal with fallout from last week’s events—and exposition and set up for another major event (or two) next week that should wrap up the end of Leviathan Wakes material and put us into Caliban’s War in episode five. The Expanse has always laid out its episodes in this sort of cyclical pattern, alternating between action and exposition, punctuating the flow of its overall story with periods of calm and excitement, but with mixed success. The show’s quieter episodes have had a tendency to feel like wheel-spinning, and there’s some of that here, but there’s also copious evidence that the show’s writers have taken some of the common criticisms of season one to heart and found a much better balance between exposition and events. To be sure, there are a few clunky moments in “Static,” but it was never boring, and there’s plenty going on the keep viewers excited for next week’s episode.

Spoilers below for the episode and books.

“Static” starts with an event leftover from last week, the destruction of Deimos by the Earth navy, which comes even before the opening credits. The opening shot of Earth’s missiles zooming towards Deimos quickly cuts to Bobbie Draper and her squad of Martian marines watching the news, which details the tiny moon’s complete obliteration and the deaths of all seventeen of its residents. We then get a short scene of Avasarala and Errinwright discussing the possible war with Mars, which turns to a voiceover on top of scenes of the Martian marines training. It’s a smart use of a couple of minutes that further sets up the rivalry between the Avasarala and Errinwright philosophies and highlights the seriousness of the situation. This whole opening sequence also resonates thematically with the rest of the episode (and, I expect, much of this season of the show), which deals heavily with ideas about the value of human life, whose lives matter, and the ease and difficulty with which different characters treat different lives as disposable. Sadly, Chrisjen doesn’t get much to do the rest of the episode, though her “What the fuck is that?” when she finally gets a message back from Fred Johnson near the end of the hour promises that she’ll have plenty to do in the next episode or two.

Similarly, Bobbie and the rest of the Martian marines are subjected to a somewhat boring and, frankly, redundant subplot this week. We get to see the way that the three native-born Martians single out and pick on the Earth born Private Travis, which was already touched upon in the first episode of the season. In the end, this relatively minor personnel issue is resolved and Bobbie and company are sent on to Ganymede, which book readers will recognize as the place where we first meet Bobbie in Caliban’s War. I suspect that all this time spent with Bobbie’s team is meant to help viewers connect with her and them before the Ganymede incident, but all these characters struggle with likability—probably because they spend so much time on petty bickering. It’s an interesting adaptational dilemma, though, if you think about it. On the one hand, I’m glad that the show didn’t work too hard to paint Bobbie and her team as overly soft and lovable. Bobbie’s not, in general, a super likable character, and the show is portraying her pretty much how she appeared in the book. On the other hand, they’re going to a lot of trouble to try and make the viewer care about this team of people and it’s, one, not working very well and, two, strongly telegraphing that this group of characters is marked for tragedy. The ominous way that Sutton pronounces “Ganymede” is a dead giveaway.

Most of “Static” takes place at Tycho Station, to which the Rocinante and Fred Johnson have returned with prisoners from Thoth. While the crippled ship is being repaired, its crew is fractured. After shooting Dresden last week, Miller is out, banished from the Rocinante by a furious, self-righteous Holden and from Tycho by Fred Johnson, who is himself struggling to figure out next steps in how to deal with Eros and the conflict between Earth and Mars that is sure to spill over into the Belt and Outer Planets. Holden and Naomi have a disagreement about Miller and Dresden, which sends Naomi off the Rocinante for some girl time with Fred Johnson’s assistant, Samara, and leads Holden to focus on interrogating their most important prisoner, a scientist named Paolo Cortazar. Amos starts the episode by having a commiserating drink with Miller but turns out to be instrumental in getting Cortazar to talk. Meanwhile, Alex is eaten up with guilt over the deaths of the twenty-five Belters on the second boarding pod at Thoth, and he spends the whole episode running and rerunning simulations of the fight in order to figure out a way that he could have saved them. All of this works together to produce a strange effect that is probably not quite exactly what the writers hoped for. The idea of breaking up the crew and then putting them back together at the end of the episode is a solid one, and it ought to be enough to fuel an episode, but the truth is that not all the conflicts here really work. There aren’t always clear consequences for characters’ actions, and the interpersonal stakes feel low when compared to the major events happening in the story.

This is probably most glaring in Miller’s storyline this week. In his first appearance of the episode, Miller is assaulted and berated by Holden, who is outraged at Miller’s extrajudicial killing of the unarmed Dresden. Fred is more quietly angry at Miller, perhaps angry less at Miller’s action and more at Miller’s usurping of Fred’s authority in the situation, perhaps for some other complex reason. It’s not always easy to tell with Fred Johnson, who is still a somewhat mysterious character in the show. In any case, Fred orders Miller off Tycho ASAP and sends Miller off to, presumably, find a ship to take him off. However, this isn’t what Miller does at all. It turns out that almost no one is actually that upset with Miller. In fact, some of the Belters on Tycho seem almost to hero worship the ex-cop, and Miller loafs around the station for somewhere between a day or so and a couple of weeks. The timeline is confusing. He has a drink with Amos, then goes to the Mormon temple on Tycho and lets some poor nice Mormon waste time giving Miller the whole spiel about the generation ship, the Nauvoo, parked outside Tycho. Miller is also having visions of Julie Mao, who seems to be beckoning him back to Eros, so he decides Eros needs to be destroyed and goes back to Fred Johnson to suggest that they use the Nauvoo to do it, and Fred agrees with no real argument. It’s a weird storyline because it feels important and somewhat dramatic during the watching, but its internal logic doesn’t actually hold up to much scrutiny. It’s Fred’s easy agreement at the end that really killed my suspension of disbelief, but this plot overall relies a little too heavily on the ability of viewers to fill in blanks and imagine character motivations and rationalizations that aren’t adequately supported by what is shown on screen.

The disagreement between Holden and Naomi is an obvious one. Holden, self-righteous prig that he is, hates that Miller shot Dresden, who was unarmed and not obviously presenting any imminent threat to the people who were in the room with him on Thoth. Naomi, however, sees the wisdom of Miller’s decision, though she isn’t entirely approving of it being so unilaterally decided and carried out, and she urges Holden towards forgiveness and clemency or at least pragmatism. This argument sends the two apart for most of the remainder of the episode, with Holden working with Fred and Amos to get information out of the scientist, Cortazar, while Naomi drinks and plays and dances with her new friend Samara. Before the end of the episode, Holden and Naomi have one more conversation where they reconcile, and this puts them right with each other in time for whatever comes next for them. The thing is, this is the first test of their relationship, but it never feels truly consequential. When they aren’t in the same room, it’s as if the two characters don’t even exist to each other, and their reconciliation feels too easily accomplished at the end after such a significant philosophical disagreement.

Still, “Static” is a good episode that does a lot of necessary ground laying for next week’s major events. The Nauvoo exposition was nice and not too clunky, the use of the Eros noises as a soundtrack was mostly well-done, and while quieter than the first two episodes of the season, this one didn’t feel slower or less interesting. I’m happy to see that we’re on track to finish Leviathan Wakes by the end of episode four, though. I cannot wait to get deeper into Caliban’s War material. The back half of this season should be awesome for female characters, and that is definitely relevant to my interests.